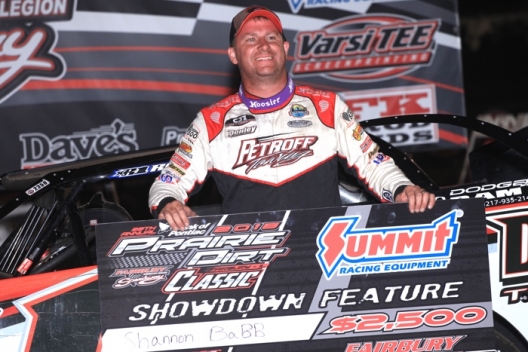 Chris Simpson isn’t known as a cushion-rider, but he mastered the top side of the quarter-mile oval to score a flag-to-flag victory in the first 25-lap qualifying feature.

After surging off the outside pole to grab the lead from front-row mate Bobby Pierce at the initial green flag, the Oxford, Iowa, driver was never seriously challenged in a marathon race slowed by seven caution flags and one red flag.

Simpson survived a pair of late caution flags — on lap 19 for debris and lap 22 for Chase Junghans’s slowing car — to beat Kyle Bronson to the checkered flag by 0.762 of a second for a $2,500 payday.

“We got a good piece for tomorrow,” said Simpson, whose two previous PDC feature starts resulted in finishes of seventh (2014) and 13th (’14). “I’d have much rather not been up on that cushion, but J.D. (Jonathan Davenport) told me it’s a lot easier up there so I’ll prove him it’s not.

Don O’Neal came from deep in the field to finish third while Wisconsin’s Paul Parker made a last-lap move to nip Dennis Erb Jr. at the finish to grab the fourth and final transfer spot.

Pierce spent most of the race’s first half battling for second with Bronson, but contact between the two rounding turns one and two on lap 12 caused Pierce to stop on the inside of the track with damage that required wrecker service. He climbed out of his car and gestured angrily at Bronson during the caution period.

A flurry of caution flags slowed the race’s early stages, starting with Brian Dunn’s lap-five spin between turns one and two. Dunn’s twirl for was followed by a lap-six spin in turn-four spin by Derek Doll; a chain-reaction jam-up between turns one and two on lap seven that left Paul Parker stopped on the track; and a turn-two tangle involving Collin Alexander and Jay Morris on lap eight.

The most serious accident occurred on lap nine when Jay Sparks spun in turn three and was clipped hard by Alexander, who spun to a stop with heavy rearend damage. Dunn was also involved in the incident that necessitated red-flag conditions but resulted in no injuries.

Hudson O’Neal wasn’t involved in a caution-causing incident, but he nearly flipped on a lap-nine restart when his car bicycled between turns one and two. The teenager’s machine briefly rode the wall before he regained control, albeit not before tumbling from fourth to the back of the pack. He continued on to finish seventh.

In a race that showcased the top three drivers in the World of Outlaws points standings, defending champion Brandon Sheppard charged past points leader Mike Marlar for the runner-up spot on lap nine and grabbed the lead from second-place points man Chris Madden on lap 15 en route to a $2,500 victory.

The 25-year-old Sheppard ran away from the pack once in command, beating Madden, who led laps 1-14, to the finish line by 2.583 seconds in a caution-free event. It marked the second straight year that Sheppard has captured a PDC qualifying feature.

Sheppard was so thrilled with the performance of his Rocket Chassis house car that he was at a loss of words when asked to offer an idea of how he could make his machine faster for Saturday’s finale.

"I don’t really know honestly,” said Sheppard, who will bid to become the first driver to win the PDC in consecutive years since Bob Pierce captured three in a row from 1999-2001. “It was really good there. It’s gonna get a lot slicker for the 100-lapper so we just gotta make it to where it will be good at the end of the race.”

Billy Drake made a steady advance forward along the oval’s inside lane to finish third. The 1997 PDC winner slipped past Marlar on the final lap to take the position, leaving Marlar with the fourth and final transfer spot.

Marlar actually came close to taking the lead on lap seven when he made slid in front of Madden through turns three and four, but Madden shot back to the inside off the corner and remained on top. Marlar never seriously threatened again.

Jimmy Owens ran fourth for most of the distance but settled for fifth after watching Drake overtake him on lap 22.

Finding the inside lane to his liking, Devin Moran drove away from the field to tally a wire-to-wire triumph in the third 25-lapper. He was never seriously challenged receiving some brief pressure from Ryan Unzicker and Scott Schmitt early in the race.

“The track got real crumby and I could actually see Wylie (his younger brother) a little bit coming out of two — he was standing in three — and he just kept giving me that, ‘Little bit more (space), little bit more,’” Moran said. “I tried to run the top of one and two a little bit but it was just too much of a cushion against the wall. I was just trying to save my stuff.

“We just did what we had to do — we hit the uke tires and put ‘er in victory lane tonight.”

Unzicker finished 2.844 seconds behind Moran in second place. Rick Eckert finished third after overtaking Schmitt for the position on lap nine and Michael Kloos recovered from his involvement in two lap-one tangles to finish fourth and move on to Saturday’s 100-lap finale.

Schmitt ran in a transfer position for more than half the race, but he was unable to keep pace running the outside of the track and eventually fell by the wayside when mechanical trouble caused him to slow and bring out a caution flag on lap 16.

The first lap was a rough one as a third caution was needed before the circuit was completed for Greg Wagner’s spin between turns one and two.

Thrilling his home-state fans, Shannon Babb mounted a furious late-race rally to overtake Brian Shirley on the final lap for a dramatic victory in the fourth qualifying feature.

Shirley fought past Babb for the lead on lap 16 and briefly appeared primed to drive away to the $2,500 top prize. But first Tanner English came on to provide a challenge on lap 18, and then, after English’s bid was hampered by lapped traffic, Babb gathered himself to make one more push.

Powering around the outside of the track, Babb overtook English for second on lap 23. He proceeded to catch Shirley on the backstretch on the last circuit, shot to the outside of the leader rounding turns three and four and vaulted off the fourth corner to beat Shirley to the finish line by a mere 0.255 of a second.

The triumph left Babb smiling from ear-to-ear in victory lane at a track that he considers one of his favorites.

“It’s all about the racing and the fans here and the last-lap wins,” said Babb, a three-time PDC champion. “Awesome racetrack — top, bottom. That bottom got going and the top slowed down and I had to regather my thoughts and change my line up a little bit.”

English settled for a third-place finish and Jonathan Davenport, who spent most of the distance banging the cushion in an attempt to find speed, was fourth as the top-four finishers crossed under the checkered flag separated by just over half a second.

The race’s only caution flags flew on lap seven, both for debris on the track.

Bobby Pierce of Oakwood, Ill., crunched up the right-rear portion of his car’s spoiler but still managed to register the overall fastest lap in qualifying, turning a circuit at 13.188 seconds in the first group. He will start from the pole position in the first of four 25-lap qualifying features.

Devin Moran of Dresden, Ohio, was the quickest qualifier in the second group with a lap of 13.427 seconds, earning him the pole for the third heat. He won one of the qualifying features last year.

Mike Marlar of Winfield, Tenn., and Jonathan Davenport of Blairsville, Ga., also will start a 25-lapper from the pole position.

Billy Moyer of Batesville, Ark., experienced mechanical trouble and missed his scheduled spot in the first qualifying group, but he made repairs and clocked ninth-fastest taking just one lap at the end of the session.

Absolutely perfect weather conditions — partly sunny skies and an afternoon high temperature in the mid-70s — prevail for the opening night of the 29th annual Prairie Dirt Classic. The forecast for Saturday is for virtually identical weather. … The 61-car field signed in for action is down a modest four cars from last year’s 65-car turnout that was the largest since the PDC became a mid-summer WoO event in 2013. It is, however, the third-highest car count for a Dirt Late Model event this season, trailing only Eldora Speedway's Dream (78 total entries) and the Show-Me 100 at Lucas Oil Speedway in Wheatland, Mo. (66 total entries, including 65 cars for Thursday's program and 64 on Friday). … The companion UMP modified division also drew 61 entries, putting pit space at a premium as usual for the PDC. … Last year’s PDC fast-timer, Devin Moran of Dresden, Ohio, is back at FALS for the second time in his career. … Bobby Pierce of Oakwood, Ill., used an open-trailer to haul his car to Tuesday night’s WoO show at Davenport (Iowa) Speedway, but this weekend he has a borrowed conventional, single-car enclosed trailer to work out of. … After WoO regulars won just four of 24 heat races over the first four years that the PDC was sanctioned by the national tour, last year’s four 25-lap qualifying features saw three WoO chasers (Moran, Shane Clanton of Zebulon, Ga., and Brandon Sheppard of New Berlin, Ill.) emerge victorious. The other $2,500 winner was Mike Marlar of Winfield, Tenn., who is following the WoO circuit for the first time this season and enters the weekend leading the points standings. … A few out-of-the-box entrants include Derek Doll of Parkersburg, W.Va., who failed to qualify for the PDC in his first-ever visit to FALS last year; Jim Rogers of Statesboro, Ga., who decided to make the long haul because he simply wanted to experience the track for himself; and Sammy Epling of Bancroft, Mich., who has attended the PDC as a pit-crew member for Tim McCreadie of Watertown, N.Y., in the past. … McCreadie is one of two WoO-era PDC winners not in this weekend’s field, joining Josh Richards of Shinnston, W.Va. McCreadie, who captured the race in 2014, is running a Sweeteners Plus big-block modified in upstate New York this weekend while his Longhorn house car Dirt Late Model effort readies a new car; Richards, the ’16 winner, is taking a two-week break from action so his Best Performance Motorsports operation can regroup following a rough visit last weekend to I-80 Speedway in Greenwood, Neb., for the Silver Dollar Nationals.

The 29th annual Prairie Dirt Classic — the biggest and, at $30,000 to win, richest Dirt Late Model event of the season in the state of Illinois — kicks off Friday night with a qualifying program that boasts a unique qualifying format for the second consecutive year.

In its sixth year as a big-money, mid-summer spectacular under the World of Outlaws Craftsman Late Model Series banner, Friday’s action will begin with time trials that set the lineups for four 25-lap qualifying features that each pay $2,500 to win and $200 to start. The top four finishers from each preliminary will move on to Saturday night’s 100-lap finale while the remainder will run B-mains before the century grind.

The Prairie Dirt Classic will conclude on Saturday night with WoO B-Mains, the Prairie Dirt Shootout for non-qualifiers and the 100-lap PDC that carries an $30,000 winner’s check for the second consecutive year.

Brandon Sheppard of New Berlin, Ill., won last year’s PDC for the first time in his career on his way to the WoO championship. Other winners since the event moved to late-July from its traditional Labor Day weekend date include Shannon Babb of Moweaqua, Ill. (2013), Tim McCreadie of Watertown, N.Y. (’14), Jonathan Davenport of Blairsville, Ga. (’15) and Jonathan Davenport of Blairsville, Ga.