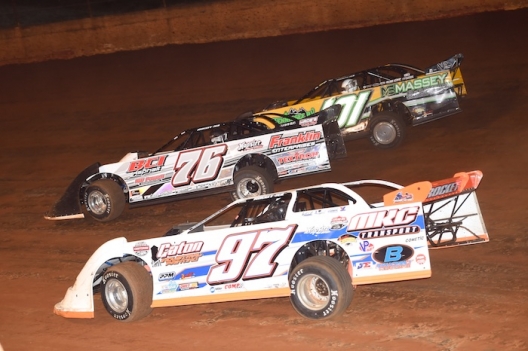 The 27-year-old Overton did so in dramatic fashion, splitting frontrunners Casey Roberts of Toccoa, Ga., and Michael Chilton of Salvisa, Ky., down the backstretch to assume the point on the 10th lap of Thursday’s 35-lap main event. Leading the remaining distance, Overton earned a $3,500 payday in his fourth series victory of the season.

“I wanted to win this thing,” Overton said in victory lane. “We had some bad luck at Boyd’s and tore up a motor. We worked until 5:30 last night and we worked all day today. We were probably the last ones to pull into the pits. I couldn’t do it without (crew members) Todd Pruitt and (Grant) Pearl. If it wasn’t for them, I would have went home yesterday.”

Rolling off from the fifth starting spot, Overton powered around the high side to close in on the race leaders in the early running. His charge slowed by a lap-nine caution, Overton used momentum from the restart to shoot ahead of the frontrunners, stretching his lead late-race to pick up a Crossville Southern Nationals victory for the second straight season.

“I just wanted to get to the front,” Overton said. “I probably wanted to win this race here, probably worse than any of them I’ve won. This racetrack is pretty badass. Every time we come over here, it’s awesome. It kind of feels like my hometown track, driving for (Randy) Weaver earlier. I’ve come here a lot.”

It was second-starting Chilton charging to the front of the front of the field at the drop of the green flag, battling third-starting Roberts in the early laps. With the pair racing side-by-side, Roberts pulled ahead out of turn four to lead lap eight, falling to Overton two circuits later.

Fighting back mid-race challenges from Chilton, Roberts finished second at the checkers, with Dale McDowell of Chickamauga, Ga., advancing from the sixth starting spot to finish third. Chilton ran fourth, with Craig Vosbergen of Perth, Australia, improving from the eighth starting position to round out the top five.

“We come up short there,” Roberts said after the race. “I know we was holding Brandon up pretty hard. He let us know it. But we’ll continue on and try and get one spot better tomorrow. It was a good race for all the fans. Just hate to come up short again.”

Piloting a Kinzer Motorsports entry, McDowell said he and his team were still trying to work a few kinks out of the car. But he was still able to record his fourth podium finish in the last five Southern Nationals events.

“We’re missing a little bit still,” McDowell said. “The driver fell out of the seat qualifying. I got us buried a little bit. But we was able to race our way back up through there. It was a lot of fun. We’ve got a couple of more nights here so we’ll see if we can pull a (win) out of one of them.”

Notes: Overton notched his ninth career Southern Nationals victory. … The race was slowed by three cautions. … The first yellow flag flew on lap nine when Perry Delaney slowed in turn four. … Ricky Tinch got into the inside backstretch wall to draw a caution on lap 24. … A yellow flag waved on lap 31 when Ivedent Lloyd Jr. slowed off the pace.

Polesitter John Ownbey shot to an early lead, with David Doherty running a comfortable second. As the race reached the halfway mark, Ownbey stretched his lead, with Brad Skinner moving ahead of Dusty Carver to take the third-place spot. Pulling away in the final laps, Owbey won the heat, with Doherty holding off a charging Skinner to finish second.

Charging around the high side, outside polesitter Aaron Ridley edged ahead of fellow front-row starter Donald McIntosh at the line to lead the first lap. McIntosh shot back to the front of the field on the second circuit, falling to third-starting Randy Weaver one circuit later. With the top-two cars pulling away, McIntosh challenged Weaver mid-race, nearly sliding ahead out of turn four on lap eight. Weaver won the consolation, with McIntosh and Ridley rounding out the podium.

Joey Coulter of Concord, N.C., clocked Thursday’s overall quick time, tripping the clock with a time of 12.059 seconds. Coulter will start on the pole of the 35-lap main event. As the fastest qualifier in his respective time trial group, Michael Chilton of Salvisa, Ky., will start outside the front row of the feature lineup.

With 23 cars on hand, the car count is up eight entries from last year’s Southern Nationals event at Crossville. … Hometown driver Randy Weaver is among the field at Crossville. He finished runner-up in a Crate Late Model feature at the high-banked oval a couple of weeks ago. … After notching a podium finish at 411 Motor Speedway in Seymour, Tenn., on July 17, Michael Chilton of Salvisa, Ky., has rejoined the Southern Nationals field at Crossville. He picked up a victory in the rescheduled Spring Nationals event at Crossville last month. … Teammates Shanon Buckingham of Morristown, Tenn., and Robby Moses of Maryville, Tenn., are sitting out the series action again on Thursday night. The pair is expected to be back on hand for Friday’s event at Smoky Mountain Speedway in Maryville, Tenn. … After heavily damaging his No. 8 machine in a Friday crash at Swainsboro (Ga.) Raceway, Craig Vosbergen of Perth, Australia, is back in his own car for Thursday’s program. He piloted a Billy Franklin-owned entry on Sunday at Rome (Ga.) Speedway, missing Tuesday’s series event at Boyd’s Speedway in Ringgold, Ga. … Brad Skinner of Spring Hill, Tenn., has joined the Southern Nationals tour for its final weekend of action. … Other drivers making their first series start of the season on Thursday night are Dusty Carver of Englewood, Tenn., Ricky Tinch of Deer Lodge, Tenn., and Perry Delaney of Sparta, Tenn.

The Schaeffer’s Southern Nationals Series kicks off its final weekend of action on Thursday with a $3,500-to-win event at Crossville Speedway. The miniseries returns to the 1/3-mile high-banked oval for the third consecutive season.

Thursday’s program will include hot laps, time trials, two-last chance heat races and the 35-lap feature. The top five cars from each qualifying group will be locked in to the main event, with heat races determining the remainder of the feature lineup. Crate Late Models are among other divisions that will be in action.