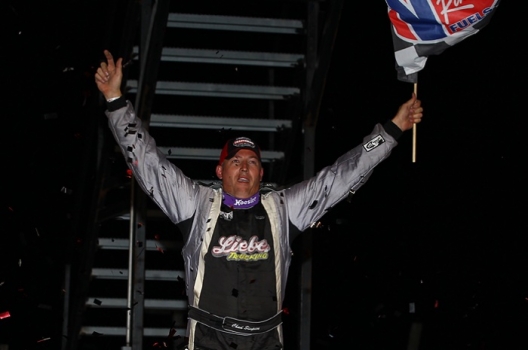 Mount Vernon’s Chad Simpson took the honors Tuesday by leading all 40 laps on the historic half-mile Mississippi Valley Fairgrounds oval for a $10,000 payday and his first victory on the national tour. The 39-year-old Simpson turned back challenges from WoO title contenders Mike Marlar and Chris Madden in adding another national touring victory to his 2015 Lucas Oil Late Model Dirt Series triumph at Knoxville (Iowa) Raceway.

“Man, this is awesome. We got ourselves a Lucas win a few years ago, and got this Outlaw win with these car owners, Bud and Denise Brinkman, I thank them guys … this is awesome,” Simpson said in victory lane.

The seventh-starting Madden of Gray Court, S.C., finished four-tenths of a second behind Simpson while the winner’s younger brother Chris Simpson of Oxford, Iowa, advanced nine positions to finish third. Marlar, of Winfield, Tenn., who ran second most of the way, and Rick Eckert of York, Pa., rounded out the top five.

Reigning series champion Brandon Sheppard of New Berlin, Ill., was running a strong third when he went up in smoke on lap 27, ending his race.

Simpson is the WoO’s third Iowa winner at Davenport after Muscatine’s Brian Birkhofer (2004 on the half-mile oval) and Davenport’s Brian Harris (2007 on the quarter-mile layout).

“It’s awesome to win here at home in front of all our fans and all our sponsors,” said Simpson, who notched his third overall victory of the season.

Marlar took a shot at Simpson before the race’s lone caution appeared on lap 32, while Madden turned up the heat in the final laps. Neither could find a way past Simpson.

“It was a little closer than I like ‘em there at the end,” the winner said. “I saw (Marlar) get to the outside of me that one time, and I knew I had to get going. That bottom was so good, especially coming off (turn) four, it was rubbered up pretty good, so a (challenger) had to be there and get in that rubber.”

Simpson never saw Madden while trying to hit his marks in the final laps.

“I thought I could hear somebody getting close, and I knew as long as I kept it straight down there around the bottom in (turn) three and didn’t slide up the racetrack and hit the rubber strip, there was nobody going to go around me,” he said.

Simpson did have a little scare when he nearly got into the turn-two wall while running the high side midway through the race.

“It was getting close. Once my guys (signaled and) got me moved up there early in the race, I knew there was no way (anyone) was going to pass me around the bottom down there, but it just kept getting thinner and thinner and thinner,” Simpson said. “I got myself to backing it in there too much and I got a little too close. Then once I saw (Marlar) get underneath me and I couldn’t get around them lapped cars when I was around the top, so I knew that bottom had to be just as good as the top, so I moved myself to the bottom and just tried to keep it straight and not slide the car too much.”

Madden felt like he had a golden opportunity at his fifth WoO victory of the season but simply waited too long to make his move.

“We waited too late to pull the trigger there. We should’ve pulled the trigger about two laps earlier. We could be up there getting our picture made in victory lane, but congratulations to (Simpson),” Madden said. “This place is huge, so I didn’t know where to put my crew guys at where I could see ‘em. I really didn’t know how big of a lead I had on (Chris) Simpson, so I didn’t know whether to go up there and try it or not, so we waited to the last lap there to give it a shot. We had the car to do it there — it’s my fault I didn’t pull the trigger one lap earlier.”

The winner’s brother had to rally from the sixth row to get into contention.

“We just got put behind there in the heat race. I got stuck behind my brother-in-law (Dave Eckrich) there and just couldn’t get going. We had a good car all night, this car’s been good,” Chris Simpsons said. “Congrats to Chad. He deserves it. They’ve been working their butts off. He had a tough string of luck there a couple of weeks ago, so to see him come out with a win is pretty cool.

Tyler Bruening of Decorah, Iowa, brought out the race’s lone yellow flag with eight laps remaining when he got into the frontstretch wall. He continued and finished 14th, the last driver on the lead lap.

WoO get a couple of days off before heading to Fairbury (Ill.) American Legion Speedway for the $30,000-to-win Prairie Dirt Classic, a two-day event at the quarter-mile fairgrounds oval that’s available to fans at home via DirtonDirt.com pay-per-view.

Notes: Chad Simpson is leading the Lucas Oil Midwest LateModel Racing Association points and heads to Lakeside Speedway in Kansas City, Kan., on Saturday … Simpson became the third first-time winner of the season after Cory Hedgecock of Loudon Tenn., and Michael Norris of Sarver, Pa. … Fourteen drivers completed 40 laps at Davenport with 15 running at the finish.