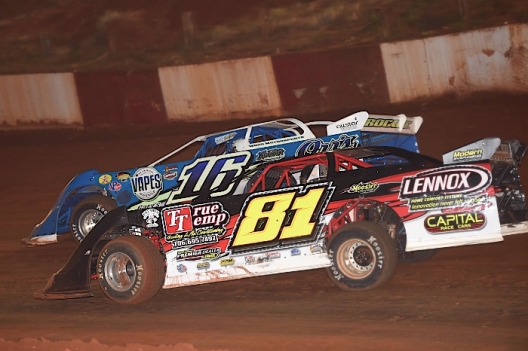 ROME, Ga. — Austin Horton was in the right place at the right time. Sometimes that’s just as important as having a blazing fast race car.

Taking advantage of a late-race caution, the Newnan, Ga., driver grabbed the lead from Aaron Ridley of Chatsworth, Ga., on the restart and led the final seven laps Sunday night at Rome Speedway for his first career Schaeffer’s Southern Nationals Series victory.

Ridley, who led laps 1-22 before giving way to Michael Page of Douglasville, Ga., regained the lead when Page was caught up in a five-car crash in turn two, but Ridley couldn’t repel Horton, who charged by to lead lap 47. Ridley settled for second, with polesitter Ivident Lloyd Jr. of Ocala, Fla., finishing third.

Eighth-starting Casey Roberts of Toccoa, Ga., finished fourth — his fifth top-five finish in six series races that moved him into the series points lead — and Page rallied back from eighth to finish fifth, despite a tangle with Dale McDowell that left the veteran McDowell headed the wrong direction with two laps remaining in the 53-lap affair.

“We took the white flag and we was coming into turns one and two right here and they threw the caution and I was like, man, not tonight,” said Horton of the last of four caution flags that slowed the action. “I knew if I come down here in turns one and two and made another smooth lap, they’d have a hard time getting by me, so I just tried to stay smooth and conservative those last two laps and I’m glad we finally got it done.”

The last two circuits around the half-mile oval may have been the easiest for Horton, who had to work hard to pace himself after Page took the lead on lap 23 and began to blitz through the field.

“It’s hard (to conserve), especially here,” Horton said. “Early in the race I was pacing myself and them guys were rolling around me and stuff. I was trying to stay cool, because here you’ll chunk your tires out real easy, so I had to be real careful.

“I had a lot harder tire on the right sides than probably a lot of people did. I just kinda rode there for awhile. I kinda got nervous when Michael (Page) went on by, but I tried to hold my composure and keep my tires under me. I knew I’d need something at the end. There’s always a caution at the end of Rome races and I was counting on it. It played out right in my favor.”

While it was the second-starting Ridley who bolted into the lead at the start, Page wasted little time getting to the front. Coming alive after a caution on lap seven, Page charged forward from his sixth starting position and began to pressure Ridley on lap 18.

Page worked the low side and pulled even with Ridley as they flashed under the flagstand on lap 20. When Ridley moved low to keep Page at bay, Page simply stepped to the outside and drove around him. Once in the lead, he left little doubt who had the fastest car.

Page quickly built a 2.3-second lead by the halfway mark. And the advantage over Ridley continued to grow. On lap 44, Page put the 10th-running Brandon Overton a lap down and marched on. On lap 46, Page’s lead had grown to a whopping 6.724 seconds and he was cutting through the backside of the top 10 with ease. Then came the grinding crash with Shanon Buckingham spinning in turn two, collecting Page, Forrest Trent, Donald McIntosh and Overton.

“It looked like Casey Roberts got in with Buckingham there and somehow (Buckingham) spun right in front of me, like quick,” said an obviously disheartened Page. “It’s bad. Then you lap cars and they still put them back in front of you. It just sucks. Everything about it. It’s better leaving knowing you had a good car … and at the same time, it just sucks, too. But we’ll come back and try it again.”

With Page sent to the rear of the field along with Overton — Trent, Buckingham and McIntosh called it a night — Ridley inherited the lead. But it was Horton who gained the most as Ridley couldn’t hold on to the top spot.

“We had a real good car. I probably used my tires up too much early in the race,” Ridley said. “I kinda got out there and probably should’ve rode a little more. I told them guys if I get the lead, I’m gonna drive this thing like there ain’t no other and we’re gonna get what we get.

"I hate that for Michael. Michael probably had one of the best cars here, hands down. My guys was giving me some pretty good signals. I was moving around the race track trying just to keep him back there, but there was no stopping (Page).”

Notes: After winning three races in a row, Brandon Overton of Evans, Ga., struggled to a ninth-place finished at Rome. “You can’t win them all,” said Overton, adding that he wasn’t exactly sure why he struggled so. “We’re just trying to get ready for that North-South (100 at Kentucky’s Florence Speedway) is what we’re really trying to do. I just want to learn as much as I can about this car and get better. I know there aren’t really any tracks like Florence that we’re gonna go to, but at least when we go to (Florence) I will have covered (different) things.” … Dale McDowell was in eighth place when he spun while racing extremely hard with Page in the final few laps. McDowell went to the rear and crossed the finish line in 15th, but was sent to the end of the finishing order at the end of the race because he exited his car on the track and then approached Page’s car for a discussion. … The solid outing by Casey Roberts — his fifth top-five finish on the tour this year — thrust him into the series points lead heading into Monday’s off day. … The four cautions were for a spin by Zach Leonhardi on lap six; the slowing car of Tyler Millwood on lap seven; the melee on lap 46; and McDowell’s spin on lap 52.

Just after midnight and the Schaeffer’s Southern Nationals Series starters are beginning to make their way to the track. The evenings program was delayed more than an hour due to pesky thunderstorms. … Ivedent Lloyd Jr. of Ocala, Fla., and Aaron Ridley of Chatsworth, Ga., will start alongside each other on the front row of Sunday’s 53-lap main event. … Lloyd is making his third series start this season. He best finish was seventh on Friday night at Swainsboro (Ga.) Raceway. … Ridley is fifth in series points after starting all five features thus far. His best finish, fourth, came Saturday at Swainsboro. … Aussies Craig Vosbergen and David Doherty earned the series provisionals and will start 21st and 22nd respectively. … Vosbergen has started four features after sitting out Saturday night when he and his crew decided his heavily damaged Longhorn Chassis needed to be put back on the jig for repair. … Doherty has entered three shows and started two features. He too skipped Saturday’s race in order to work on his car, which was damaged in the same opening-lap crash on Friday that collected Vosbergen.

Frank Ingram of Woodstock, Ga., won an opening-lap duel with fellow front-row starter Tyler Millwood and led all eight laps in a race slowed by two cautions. Millwood finished second, with Robby Moses grabbing third. Austin Smith finished fourth and J.T. Seawright nipped Gary McPherson by three one-hundredths of a second to take the final transfer spot. A caution waved on the initial start when Ingram fired from the outside and Millwood, the polesitter, didn’t take off. The second caution flew when Jake Knowles rolled to a stop in turn two with a flat tire.

From his outside front row starting spot, Donald McIntosh of Dawsonville, Ga., shot to the lead on the opening lap and pulled away from the field, leaving a two-car battle for second between Clint Smith and Brandon Overton behind him. McIntosh won and will start 11th in the feature, while Smith held off Overton for second. Cya Knight and Zach Leonhardi completed the top five.

After waiting out passing thunderstorms early in the evening, hot laps got underway shortly after 8 p.m. Rome Speedway officials are hoping to complete its first program of the season as Mother Nature has been unkind to the Swims-family facility this season forcing three rainouts in three attempts. Once the rain passed, the skies cleared and a beacon of hope in the form of a rainbow appeared in the distance beyond the back straightaway. … After skipping Saturday’s race at Swainsboro, David Doherty of Sydney, Australia, is back on tour. Doherty headed to Jason Hiett’s shop in Oxford, Ala., to make repairs to his car and then competed at Talladega Short Track on Saturday. “There was just too much to repair and I needed too many parts (to stay at Swainsboro),” said Doherty. … Craig Vosbergen of Perth, W. Australia, will pilot Billy Franklin’s personal Rocket XR1 Chassis tonight. Vosbergen, who had to send his Longhorn Chassis back to North Carolina for repairs, took Franklin up on his offer to drive the No. 17. He’ll be a teammate to Brandon Overton of Evans, Ga., for two races. … Sunday’s 29 entries is the third highest car count on the series this season behind Wythe Raceway and 411 Motor Speedway, which each drew 31 cars. … Hometown driver Jake Knowles is driving longtime driver-owner Buster Goss's No. 24. … Among drivers making their first series appearance: Knowles, Clint Smith, Michael Page, Zach Leonhardi, T.J. Reaid, Frank Ingram and J.T. Seawright.

Ivedent Lloyd Jr. of Ocala, FLa., set the overall fast time among the 29 Schaeffer’s Southern Nationals entries. Lloyd hit the track early in the first of the two sessions, tripping the clock at 13.457 seconds. It was a big bounce back for the Floridian after he set the quick time at Swainsboro (Ga.) Raceway on Saturday, only to have his time disallowed when he failed the series droop rule in post-qualifying tech. Lloyd had no issues at tech on Sunday as he earned the pole for the 53-lap main event.

Aaron Ridley of Chatsworth, Ga., was the fastest of the 14 drivers in the second session, turning a lap of 13.648 seconds and will start on the outside front row of the main event. The top five cars in each session are locked into the feature. Notables missing the cut were Brandon Overton and Clint Smith in the first group and Tyler Millwood and Robby Moses in the second group. They’ll head to one of the two consolation races, which transfer five from each.

The Schaeffer’s Southern Nationals Series rolls on with the tour’s sixth stop, a visit Sunday evening to the lightning fast Rome Speedway, a half-mile, red-clay oval located about 65 miles northwest of Atlanta. The series has made the turn back north following Saturday’s program at Swainsboro (Ga.) Raceway, the tour’s southernmost venue.

Dale McDowell of Chickamauga, Ga., leads the series into Rome. McDowell has held the series points lead since the third race. Casey Roberts of Toccoa, Ga., is still second, though he lost ground to McDowell after finishing 12th at Swainsboro on Saturday. Brandon Overton of Evans, Ga., enters Rome as the hottest drover on the series following three straight victories. On 20 points separate McDowell Roberts, while Overton is only 26 markers behind the leader.

Sunday’s Super Late Model program includes hot laps, time trials and a 53-lap main event. Entries will be split into two groups for time trials with the top five drivers from each qualifying session locked into the feature. The rest of the field will be set via last chance heat races. Two series provisionals will round out the starting field.