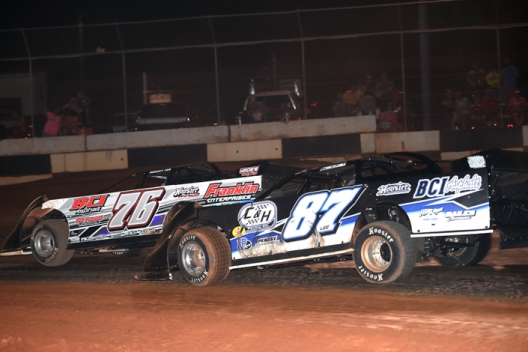 SWAINSBORO, Ga. — When you’re hot, you’re hot. And Brandon Overton is. After a season marked by mediocrity until a team change halfway through the year lit a fire under the Evans, Ga., driver, Overton suddenly finds himself in the midst of a mini-streak on a miniseries.

Overton led flag-to-flag at Swainsboro Raceway Saturday night to capture his third straight victory on the Schaeffer’s Southern Nationals Series. He grabbed the lead on the opening lap when he beat polesitter Ross Bailes of Clover, S.C., into turn one and was never seriously challenged on his way to his second $5,300 victory at Swainsboro this weekend.

Bailes was never far behind, but on a track with a dominant low grove that put a premium on passing, he managed only to stick the nose of his car up to Overton’s quarterpanel a handful of times after the lead pair caught the tail of the field before settling for second.

“I know we had a good car, but that start probably made all the difference in the world, just getting out front and setting my own pace, just cruising around driving off the right front,” said Overton.

Dale McDowell of Chickamauga, Ga., finished third for the third night in a row, while Aaron Ridley of Chatsworth, Ga., registered his first top-five finish in five events with a fourth place. John Henderson of Aiken, S.C., completed the top five.

The race was slowed by only three cautions, the first of which waved before the field could compete its first lap. After that, they raced for 50 circuits before another yellow flag appeared.

Casey Roberts of Toccoa, Ga., was running directly in front of the leaders — a spot he’d been in for nearly 25 laps — when he slowed with a flat right rear tire with just three laps remaining. Just as the field was going back to the green flag, Shanon Buckingham of Morristown, Tenn., slowed abruptly in turn three with a right rear flat as well, giving up the third position.

During the same caution, Cla Knight of North Augusta, S.C., pitted with a right rear flat also. Overton, who caught Roberts midway through the race but was unable to put him a lap down, didn’t fret too much when he saw three cars in a row roll into the hot pit area with flats.

“I was behind Casey and I knew I was a lot more straighter than he was,” said Overton. “I think he was just too tight to get down there (in the lowest grove) and he kept having to bend, so when he blew out, I figured a still had a couple more laps at least because I had followed him for what felt like forever.”

Overton had more than enough to make it to the finish. With a clear track in front of him over the final three laps, he eased ahead of Bailes and beat him to the finish by 1.049 seconds.

Like Overton, Bailes thought the first lap played as much in determining the winner as did the 52 that followed. Bailes was able to get the jump on the first attempt to start the race but the caution waved when Brian Connor, Roberts and Ridley get together in turn two. On the next start, Overton stayed even with the polesitter and managed to dive ahead of him as they entered turn one.

“We had a good piece,” said Bailes. “The start’s what got us. Brandon had a good car. I feel like we were just as good. If we could have got out front on the start I think we could have held on and won, but we’ll go on to the next one.

“We’ve been good. We just haven’t had any luck on our side. (Friday) night the fifth coil broke, the left front broke. It seemed like everything went wrong from the time we unloaded last night until just now. I thought we had a chance at it tonight, but Brandon was able to get the jump and hold on.”

“I really wasn’t trying to conserve (tires), I just wasn’t no good,” said McDowell. “Really I had a fourth- or fifth-place car, but I was running as hard as I could.”

Brandon Overton of Evans, Ga., turned the fastest lap among the 18 drivers. Going out near the back of the second session, Overton stopped the clock at 15.216 seconds. He’ll start on the outside of the front row for tonight’s 53-lap feature. Ivedent Lloyd Jr., of Ocala, Fla., set the fast time in the first group at 15.519 seconds, but his time was disallowed when his car failed post-qualifying tech. Lloyd’s car didn’t pass the tour’s droop rule. That sends Lloyd to the back of the inside row, while bumping Ross Bailes of Clover, S.C., to the pole position for the feature.

After a high percentage of afternoon thunderstorms put the Swainsboro Raceway officials in hurry mode early in the day, clear skies and mild temperatures have things back to normal, well, with the exception of the mild temperatures. Schaeffer’s Southern Nationals officials and drivers have grown accustomed to dogged July heat during their trek through Georgia over the years, but are enjoying a welcome respite this season. … Eighteen drivers are signed in Saturday following Friday’s 20 entries. … There are three new entries: Billy Franklin of Calera, Ala.; Clay Harris of Jupiter, Fla., and Blake Smith of Dublin, Ga. … The series lost five drivers from Friday’s show. … Craig Vosbergen of Perth, W. Australia, is sitting out after damaging his Longhorn Chassis in a grinding wreck on Friday. Vosbergen hopes to have the car repaired in time for the series race at Crossville (Tenn.) Raceway. In the meantime he may pilot Franklin’s No. 17 at Rome (Ga.) Speedway and Boyd’s Speedway in Ringgold, Ga. Vosbergen will receive 75 hardship points to keep his Southern Nationals trip alive. … Other drivers who didn’t return from Friday’s show include David Doherty of Sydney, Australia, who damaged his car in the same wreck that caught Vosbergen; J.R. Moseley of Columbus, Ga., who was caught up in the first lap accident also; Pearson Williams of Dublin, Ga., who is competing in the Crate Late Model division instead; and Kale Green of Pelion, S.C.

The Schaeffer’s Southern Nationals Series continues with its second night at Swainsboro Raceway,  a 3/8th-mile red clay oval situated just on the outskirts of town. The fifth night of the Ray Cook-promoted tour has reached his southernmost point before turning back north and heading to Rome (Ga.) Speedway on Sunday. With the potential for thunderstorms later in the evening, Saturday’s program has been pushed up 60 minutes. The drivers' meeting is slated for 6 p.m.

This marks the second of two series races this weekend Swainsboro. Following Saturday's rainout at Screven Motor Speedway in Sylvania, Ga., Purvis added a second $5,300-to-win so the series wouldn't be idle today.

Dale McDowell of Chickamauga, Ga., continues to lead the series, though the veteran driver who said doesn’t concern himself with the tour’s points on a day-to-day basis, did have a few markers trimmed from his lead on Friday by Casey Roberts. Roberts, of Toccoa, Ga., sits just two points behind McDowell, while 2017 series champion Brandon Overton is 32 behind the leader.

McDowell has one series victory this season, while Overton has won the last two events. Roberts, meanwhile, hasn’t finished outside the top five in the first four races. Eleven drivers have perfect attendance after four events.

Saturday’s Super Late Model program includes hot laps, time trials, heat races and a 53-lap main event. Entries will be split into two groups for time trials group 'A' determing the inside row and group 'B' determining the outside row for the feature.