Information provided by: Kevin Kovac (last updated July 21, 8:23 am)
Bloomquist oozing with confidence on I-80 pole 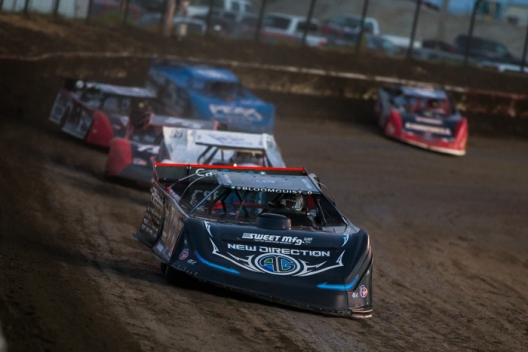 With a victory and runner-up finish in the evening’s pair of heat races landing him the pole position for Saturday’s $53,000-to-win Lucas Oil Late Model Dirt Series-sanctioned finale, Bloomquist had a record third career triumph in the 8-year-old event on his mind.

“I really haven’t seen anything much out of anybody that I don’t think we can handle tomorrow night,” Bloomquist in a postrace interview with DirtonDirt.com’s Ben Shelton.

Bloomquist, 54, was victorious off the pole in his Round 1 heat race and charged from the ninth starting spot to second in the second round, earning him the most passing points in the qualifying program. His 126.320 points beat out Mason Zeigler of Chalk Hill, Pa., whose total of 122.320 points from finishing third in a Round 1 prelim and winning a second round heat gave him the outside pole for Saturday’s 80-lap feature.

The second row of Saturday’s headliner will be comprised of 17-year-old Hudson O’Neal and his father Don, the winner of the inaugural Silver Dollar Nationals. Both Martinsville, Ind., residents won heat races.

Joining Bloomquist and Hudson O’Neal as a heat winner in Round 1 was Chad Simpson of Mount Vernon, Iowa, Ricky Weiss of Headingley, Manitoba, and Gregg Satterlee of Indiana, Pa., while Round 2 victors along with Zeigler and Don O’Neal were Jared Landers of Batesville, Ark., Kent Robinson of Bloomington, Ind., and Kyle Bronson of Brandon, Fla.

All 10 heat winners were among the top 18 in Friday’s passing points standings, giving them starting berths in the Silver Dollar Nationals feature. Bronson, who starts 18th, was the lowest-ranked driver in the points to capture a preliminary.

Bloomquist’s pole-grabbing qualifying performance came on top of a runner-up finish in Thursday night’s 50-lapper, providing more evidence that he has his self-designed machine in impeccable form at the half-mile oval.

“We’re just real, real maneuverable,” Bloomquist said. “I can run the bottom, the top, anywhere in the middle. I can change up, go in high and come off. The car is just so maneuverable and the traction level is great. I’m as confident as I can be about this race for tomorrow night.”

When asked by Shelton where he sees himself come the conclusion of the Silver Dollar Nationals, Bloomquist unabashedly proclaimed, “I’m gonna end up front.”

Bloomquist isn’t just fast, though. He also seems even more determined than usual in the wake of his tumultuous month in which he received a suspension from DIRTcar- and World of Outlaws Craftsman Late Model Series-sanctioned events for failing to complete a random drug test, announced he was ending his 2018 racing season early to undergo rotator cuff surgery and received a positive second medical opinion about his painful shoulder (a doctor told him it was caused by severe arthritis) that eliminated the need for an operation and allowed him to continue competing.

And there’s also his photo-finish loss to Jonathan Davenport of Blairsville, Ga., in Thursday night’s feature, a race he appeared to have in the bag until a caution flag on lap 33 tightened the field and gave Davenport a chance to make a furious outside charge. He referenced the circumstances of his defeat in his interview with Shelton while forcefully calling out fellow Lucas Oil Series regular Tim McCreadie of Watertown, N.Y., for stopping on the track to trigger the tide-changing caution flag.

“Last night was a great race obviously,” Bloomquist said. “The caution didn’t help us any, but obviously McCreadie has decided to be a pawn instead of a race car driver. He openly admitted to a number of race car drivers today that he talked to that he did that (brought out a caution) on purpose, and anything he can do to mess us up, he’s gonna do. That’s pretty much being a pawn in my world, so … he ought to think about racing instead of being someone else’s pawn.”

When informed of Bloomquist’s accusations, McCreadie, who finished third behind Bloomquist in Round 2’s second heat but has to run a B-main on Saturday, denied purposefully drawing a caution flag in an effort to hinder Bloomquist. He said he slowed on the homestretch because he thought he had a flat tire and then finally stopped in turn two when a caution was not immediately thrown.

McCreadie, who is the defending Silver Dollar Nationals champion, offered a succinct response to Bloomquist’s comment: “He can kiss my ass.”

Outside polesitter Don O’Neal paced all 12 laps to win by a modest 0.949 of a second over Dennis Erb Jr., whose charge from the 10th starting spot around the inside of the track brought him within striking distance of O’Neal on the final circuit.

Kyle Bronson controlled the entire 10-lap distance, crossing the finish line 3.452 seconds ahead of Chase Junghans. Ninth-starter Hudson O’Neal finished third after losing second to Junghans on lap six and having his bid to regain the position fall short. The race’s most serious incident came on a lap-one restart when Matt Buller spun in turn two and was hit by Darrell Lanigan, who hopped over the rear deck of Buller’s car and limped directly into the pits with significant nose damage. A caution flag was also needed on lap one when Al Humphrey slowed in turn four.

Kent Robinson survived a last-lap slider bid from Brandon Sheppard to preserve a flag-to-flag victory in the 9-lap race. Sheppard dived underneath Robinson through turns three and four, K-Rob powered off the top to hold on by 0.741 of a second. Ricky Weiss made a strong move forward from the seventh starting spot to finish third over Jonathan Davenport.

Mason Zeigler led all the way, winning the 11-lap race by 0.979 of a second over Scott Bloomquist, who came from the ninth starting to second in five laps but wasn’t able to draw close enough to challenge Zeigler. Tim McCreadie started and finished third while sixth-starter Billy Moyer moved up to place fourth.

Polesitter Jared Landers raced unchallenged to victory in the 12-lap event over Shane Clanton, who turned back a late challenge from Earl Pearson Jr. to claim the runner-up spot. Chad Simpson advanced from the 10th starting spot to finish fifth.

Gregg Satterlee surged from third to first on the opening lap of the 11-lap heat and never looked back en route to a convincing near-straightaway victory over Jimmy Owens. Kent Robinson was the race’s biggest mover, advancing from the ninth starting spot to place fourth.

Scott Bloomquist easily defended his pole starting spot, cruising to a full-straightaway triumph in the 11-lap prelim over the fourth-starting Darrell Lanigan. Don O’Neal made a strong charge from eighth to place third after swapping the spot twice with Shane Clanton in the final circuits. The start of the race was delayed about 15 minutes after officials worked to solve issues with the electronic scoring.

Outside polesitter Hudson O’Neal ran away with 12-lap race, beating Earl Pearson Jr. by a full straightaway. Mason Zeigler held off Brandon Sheppard to finish third. A major moment came on a lap-one restart when Jimmy Mars rode the turn-two wall and was hit by Josh Richards; Sheppard also went spinning in the incident, which knocked Mars out of action and forced Richards to pit to patch up right-front damage. Richards struggled the remainder of the distance, finishing seventh. The race’s original start was negated by Charlie McKenna’s spin between turns one and two and a caution flew again with one lap complete for Junior Coover’s spin in turn four.

Chad Simpson came off the pole to lead all 12 laps for the victory, beating Jonathan Davenport to the finish line by 0.172 of a second after surviving a last-lap restart. Chase Junghans placed third after slipping underneath Billy Moyer on lap five. A caution flag flew on lap 11 when Chris Simpson and Corey Meitner got together, causing both to limp into the pit area.

Friday’s qualifying program has been blessed with absolutely gorgeous weather conditions as sunny skies and temperatures in the mid-80s prevail. … A newcomer to the I-80 pit area for Friday’s action is Tyler Bruening of Decorah, Iowa. … Bobby Pierce of Oakwood, Ill., has switched Dunn-Benson Racing cars after the machine he drove in Thursday night’s feature was sidelined by a broke engine valve. … Ricky Weiss of Headingley, Manitoba, replaced the rearend in his Sweet-Bloomquist mount after being forced out of Thursday’s A-main while running 10th. … Darrell Lanigan of Union, Ky., made his 25th-to-fifth run in Thursday’s 50-lapper after a vibration in his newest Club 29 Race Car prompted him to pull out his backup vehicle. Lanigan, who used an emergency provisional to start the feature, is in his backup again this evening. … Josh Richards of Shinnston, W.Va., is also behind the wheel of the Best Performance Motorsports car he shifted to on Thursday after terminal engine woes knocked his primary No. 1 from further competition as he led his heat race with two laps remaining. … Andrew Kosiski of Omaha, Neb., the son of I-80 promoter Joe Kosiski, drove the same car in both the Malvern Bank Super Late Model Series and Lucas Oil Series programs on Thursday and is back in the machine this evening in hopes of making the Silver Dollar Nationals lineup at his home track. … One note to consider for Friday night’s double heat-race show: only four drivers have won two heat races under the event’s unique format. The group includes Brian Birkhofer (2012), Tyler Reddick (’12), Jonathan Davenport (’14) and Jared Landers (’16).

The Lucas Oil Late Model Dirt Series sanctions the eighth annual Imperial Tool Silver Dollar Nationals at I-80 Speedway, a half-mile oval outside Omaha owned and promoted by Nebraska’s well-known Kosiski family. A first-place prize of $53,000 has been posted for Saturday night’s 80-lap A-main, which boasted a $25,000 payoff for its inaugural edition in 2011 and offered a $40,000 check two years ago before climbing to $53,000 in ’17.

Friday night’s card features hot laps and two rounds of heat races for the Late Model competitors on hand along with a identical two-round heat-race format for United State Modified Touring Series entrants. No time trials will be contested for the Dirt Late Model division; heat races will be aligned by a draw and combined passing points from the prelims will set the lineups for Saturday’s main event.

The top 18 drivers in heat race passing points will be locked into the 80-lap feature, while remaining drivers will run consolation races on Saturday to secure feature starting spots. The 32-car feature field will then be filled out with multiple rows of provisional starters.

Saturday’s grand-finale card also features the Belt Bash for Late Model non-qualifiers, which gives the winner the option of taking the $3,000 first-place prize or a feature starting spot, and the conclusion of the USMTS program.

Hot laps are scheduled to begin at 7 p.m. CDT.