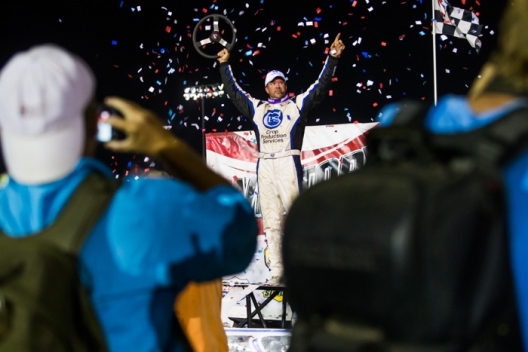 GREENWOOD, Neb. (July 19) — Jonathan Davenport conceded that he wasn’t the class of the field Thursday night at I-80 Speedway, but he won the Lucas Oil Late Model Dirt Series-sanctioned Malvern Bank Go 50 nonetheless.

It was just an epic, cushion-pounding, late-race rush that propelled the 34-year-old star from Blairsville, Ga., to a dramatic $10,000 photo-finish victory by mere inches over Scott Bloomquist of Mooresburg, Tenn.

“Sometimes you ain’t got the best car,” Davenport said after nipping Bloomquist by a scant margin of 0.015 of a second. “You just gotta get up on the wheel and get it done.”

There was no denying that Davenport drove his heart out to pull off his seventh Lucas Oil Series triumph of 2018, tying him with Bloomquist for the tour’s lead in that category and snapping his personal 13-race winless streak on the national circuit.

Bloomquist, 54, built a dominating straightaway lead shortly after grabbing the top spot from race-long pacesetter Brandon Sheppard of New Berlin, Ill., on lap 17, but a lap-33 caution flag for Tim McCreadie of Watertown, N.Y., who stopped in turn two, provided new life to Davenport. The 2016 Lucas Oil Series champion was a distant third when the yellow flew but immediately shot to the extreme outside of the half-mile oval on the restart to surge past Sheppard for second. He then nosed ahead of Bloomquist for the lead on lap 34 and swapped the top spot once more with the Hall of Famer before gaining command for good on the 37th circuit.

Davenport and Bloomquist were never separated by much more than 1 second over the remaining circuits, however, and came off turn four side-by-side on the final lap. Bloomquist, who had briefly inched back ahead to lead lap 36, made a last-ditch run on the inside but fell short at the checkered flag in what was likely the closest finish in the history of the Lucas Oil Series.

Sheppard, 25, settled for a third-place finish — over 7 seconds behind Davenport and Bloomquist — after leading laps 1-16 in the Rocket Chassis house car. Chris Simpson of Oxford, Iowa, steadily worked his way forward from the 13th starting spot to finish fourth and 25th-starter Darrell Lanigan of Union, Ky., completed the top five after gaining entry to the feature field through a Lucas Oil Series emergency provisional.

Davenport, who started fourth in his Lance Landers Racing Longhorn machine, could only shake his head in amazement over the turn of events that led to his unforgettable victory.

“Man, what a race,” said Davenport, who received two bundles of $2 bills during the post-race ceremonies to pay off his $10,000 first-place prize. “Scott definitely had the best car. Me and Brandon thought we was leading (as they ran second and third), he was so far gone before that caution come out (on lap 33).

Davenport summoned enough speed in his car to mount one final, frenetic charge when the green flag returned on lap 33 and the race then ran uninterrupted to its conclusion.

“I knew that was my only opportunity,” Davenport said of the restart. “I was hoping Brandon would pick the bottom (Sheppard did) and then I was just gonna try to roll around that cushion.”

Davenport momentarily appeared to be pulling away from Bloomquist when he stretched his edge to just over 1 second on lap 45, but Bloomquist gathered himself and drew ever closer over the ensuing circuits. When Davenport stumbled off the second corner on the final lap, Bloomquist surged to the inside of the leader on the backstretch and the race to a classic finish was on.

“I could hear him under me,” Davenport said of Bloomquist. “I spun a little bit off of turn two and it kind of shifted the car down the racetrack a little bit so I had whip it back the other way and I bottomed out getting into three. I already gave one away getting into turn three one year (at I-80), so I just tried to ease in there a little bit more than I had been and it got me too far off the cushion.”

That allowed Bloomquist to exit turn four side-by-side with Davenport. They ran neck-and-neck toward the start/finish line, separated by a sliver of space.

By the slimmest of margins, Davenport held on.

“He’s got a pretty good car right now,” Davenport said of Bloomquist, who was bidding for his second consecutive win and fourth in the last six Lucas Oil events. “For me to run that hard up against the cushion he must be pretty good on the bottom for some reason.”

Bloomquist certainly was frustrated that the lap-33 caution flag wiped out his healthy edge and turned the tide of the feature, but he acknowledged that Davenport hustled his car to emerge victorious.

“We didn’t need to see that (caution),” Bloomquist said. “He fired up on top and made it work.

“We adjusted our line a little bit,” he continued. “We were running a little bit too low (after the restart) and moved up. It seemed like it was gonna get it done. We started running him back down, and that last lap was pretty tight. I wasn’t sure who won. I think if it would’ve been one more lap, we’d have had it.”

The polesitting Sheppard, meanwhile, couldn’t maintain the early pace he set while running at the front of the pack.

“I just got a little free there at the end of the race getting into the corner,” said Sheppard, who drove with a wrap on his left hand after jamming his thumb in his steering when he was involved in a multi-car tangle the previous night at Jackson (Minn.) Motorplex. “It just made it really hard for me to get through the corners.”

The race's three caution flags were triggered by the stopped cars driven by Earl Pearson Jr. of Jacksonville, Fla., who had left-front suspension trouble on lap four; Jared Landers of Batesville, Ark., who also had suspension problems cause him to stop on lap six; and McCreadie, who pitted after stopping on lap 33 and returned to finish 15th.

Notes: Davenport’s 34th career Lucas Oil Series triumph came in his third start using a Cornett-built Chevy engine that his team recently obtained from G.R. Smith of Cornelius, N.C., who fielded the car that Davenport drove to victory in last year’s World 100, among other successes. Davenport, who has been using Durham-built Ford powerplants this season, said he made the motor change “just to try something different for myself” in hopes of shaking out of the slump he’s been in. … Bobby Pierce of Oakwood, Ill., was an early retiree, pulling off on lap five after smoke began trailing from his Dunn-Benson Racing machine. … Ricky Weiss of Headingley, Manitoba, pulled off with mechanical trouble while running 10th on lap 25. … Mason Zeigler of Chalk Hill, Pa., started sixth but was the race’s first casualty when a busted radiator forced him out of action on lap four. … Josh Richards of Shinnston, W.Va., salvaged a ninth-place finish after he moved to his backup car because terminal engine woes knocked him from the lead in his heat with two laps left. He rallied from the rear of his B-main to emerge victorious and climbed forward from the 18th starting spot in the feature. … The 50-lap race was originally scheduled for May 20 but rain postponed it two months to serve as a lead-in to the eighth annual Imperial Tile Silver Dollar Nationals, which features two rounds of heat races on Friday and last-chance races and the 80-lap, $53,000-to-win A-main on Saturday.

The boiling-hot conditions that have prevailed for the Silver Dollar Nationals in recent years — stifling heat indexes of 115 degrees or more — are thankfully absent this year. The weekend is starting under sunny skies and much more comfortable temperatures in the 80s with similar weather expected on Friday and Saturday. … Tim McCreadie of Watertown, N.Y., decided to pull out his second Longhorn car — a machine he hasn’t driven since last month’s Lucas Oil event at Mississippi’s Magnolia Motor Speedway — after the machine he ran on Wednesday night at Jackson (Minn.) Motorplex sustained bodywork and other assorted damage in a multi-car feature accident. He also has some international flavor to his crew with Australian Kye Blight joining up with him to help through next month’s North-South 100 and Canadian Huey Naylor handling T-Mac’s tire preparation. … Hudson O’Neal of Martinsville, Ind., has switched cars as well in the wake of his involvement in a Jackson wreck that left his mount sandwiched between two vehicles and its left side in the air. The 17-year-old also has a new face on his pit crew this week in Tyler Nevins, who has been away from the Dirt Late Model scene since leaving the Best Performance Motorsports operation in March; Nevins is planning to assist O’Neal through at least the Aug. 2-4 USA Nationals at Wisconsin’s Cedar Lake Speedway. … Vinnie Giuliani, a shock specialist who worked full-time for the Dream Racing No. 116 team until Brandon Overton’s recent departure from the ride, is now working with World of Outlaws regular Chase Junghans of Manhattan, Kan. Giuliani, who spent several weeks with Tony Jackson Jr. of Lebanon, Mo., after leaving Dream Racing, is familiar with Junghans; he was part of Junghans’s father Greg’s team when Omaha, Neb.’s John Anderson was the driver. … Bobby Pierce of Oakwood, Ill., is making his first-ever start at I-80. In recent years he’s skipped the Silver Dollar Nationals due to his competition on the DIRTcar Summer Nationals and/or running the NASCAR Camping World Truck Series event at Ohio’s Eldora Speedway. … Home-state standout Kyle Berck will run only the Malvern Bank Series event this evening but plans to enter the Silver Dollar Nationals action the next two nights. … Rocket Chassis house car owner Mark Richards became a grandfather for the first time Wednesday night when his daughter, Morgan, gave birth to a baby boy, Casen, back in West Virginia. Mark plans to fly home Sunday to meet his new grandchild. … Richards’s driver, Brandon Sheppard of New Berlin, Ill., is dealing with a painful swollen left thumb after jamming it in his steering wheel during one of Jackson’s multi-car tangles on Wednesday. … Gregg Satterlee of Indiana, Pa., has switched cars after the machine he ran at Jackson sustained significant damage; after its right-rear axle tube snapped off at the birdcage, the wheel bounced in front of him and then he rammed it and hit the wall.

The eighth annual Imperial Tile Silver Dollar Nationals at I-80 Speedway kicks off in a new way on Thursday night in 2018 with the running of the Lucas Oil Late Model Dirt Series-sanctioned Malvern Bank Go 50, a $10,000-to-win event that was added to the weekend’s schedule after rain washed it out on its original May 20 date. The action joins I-80’s originally planned Thursday program that includes a 30-lap feature paying $5,300 to win for the Nebraska-based Malvern Bank Super Late Model Series and a $1,500-to-win open-wheel modified card.

Thursday’s action leads into the Silver Dollar Nationals competition that includes two rounds of heat races on Friday night and last-chance races and the 80-lap, $53,000-to-win headliner on Saturday evening.