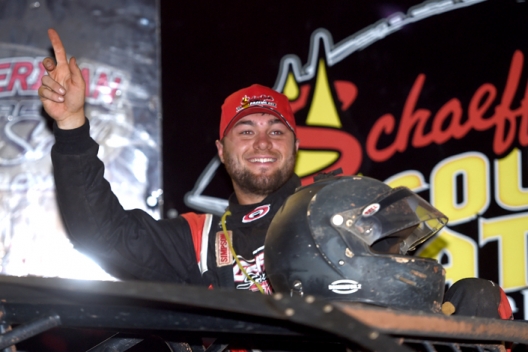 TOCCOA, Ga., — Brandon Overton sliced through lapped traffic like an ambulance in a school zone. Casey Roberts stayed in his tire tracks the whole way. And it was almost the demise of both drivers. Precariously slipping through the slower traffic, while deftly dodging near miss after near miss, Overton, of Evans, Ga., held off Roberts, of Toccoa, to win Thursday’s Schaeffer’s Southern Nationals race at Toccoa Raceway.

Overton led all 35 laps after starting from outside the front row, but it was hardly a Sunday drive. More than once, he had to take evasive action while narrowly avoiding slower cars, all while somehow managing to keep Roberts at bay. He was finally able to take advantage of a clear track following a caution on lap 24 and pulled away to win by 1.420 seconds.

“That lapped traffic … like I said, it was just meant for me to win tonight because I crashed once on the backstretch, once in (turns) one and two, and I killed the motor in that one wreck down there in (turns) three and four so I don’t know how nobody wrecked me in that deal,” said Overton, who earned $3,500 for his first Southern Nationals win of the season and sixth of his career.

Overton knew he clearly had the car to beat. On two aborted start attempts, he easily zipped away from Roberts. On the third start attempt, he bolted into the lead for good. But the traffic was the equalizer. On lap eight, Overton barely averted disaster when he and Roberts caught two slower cars on the back straight. After contact between Overton, the lapped car and Roberts, Overton nearly spun, but made a dandy save and somehow kept the lead.

“I had that thing dead locked to the right,” Overton said. “I think Casey probably got into me in the right rear, but I mean, he’s just trying to go where I’m not and the guys are two wide in front of me. I couldn’t slide ‘em. I couldn’t do anything. I was just kinda trying to wait for one of ‘em to get around the other.”

Roberts was close enough to be in the fray, but not in position to get around the leader.

“It was like a traffic jam in Atlanta there for a minute,” said Roberts. “There was no where to go. In clean traffic I knew he was better than we were and that was my only chance, so I tried to go where he wasn’t and then a guy got into him and kinda turned him up into me. It was just a mess there and luckily he came out unscathed, or not too bad. This track’s so fast and you run up on slower cars a little faster than you want to, but that’s part of it.”

The the lap eight congestion wasn’t Overton’s only tense moment. On lap 16 he jumped the cushion in turn one. On lap 17 he made contact with a lapped car as he tried to split a pair of slower cars on the frontstretch. On lap 23 he trailed three slower cars before finally pressing his way through. And on lap 24, he barely escaped contact with the stopped car of Joey Coulter, who pulled up lame in turn two.

Third-running McDowell was in perfect position to see it all, but elected to give the leaders their space as they diced through back of the field.

“There was a lot of stuff happening there,” said McDowell. “It’s just one of those deals where I was trying to bide my time and then I got a little bit loose there at the last. I could get to the lapped traffic and do OK, and those guys were way more excited to get through it than I was.

“You could throw out the finesse. Everything that it takes to run a 100-lapper and run good somewhere (else), you can throw that out the window here. It took me a little bit to adjust, but I need to come to more of these places like this. An old guy’s gonna kinda sit there and wait and sometimes it’s gonna come our way. Maybe I should have took advantage of it.”

Notes: Sixteen of the 22 starters were running at the finish, with 13 of them completing all 35 circuits. … The race was slowed by five cautions, including the two before a lap was completed. Aaron Ridley slowed with a flat on the first lap. Clayton Turner was involved in a scrape on the restart to draw another caution. A three-car crash slowed action for the fourth time. The final yellow was displayed for Coulter, who couldn’t turn his car after earlier contact folded the right side of his nosepiece under the bumper. … The race took 25 minutes to complete. … The series moves to Swainsboro (Ga.) Raceway on Friday and Saturday. Swainsboro was set to host just one race (Friday), but added a $5,300-to-win event on Saturday when Screven Speedway officials were forced to cancel their race due to saturated grounds and an unfavorable forecast at the Sylvania, Ga., facility.

After a pair of negated starts, the front row starters were docked a row, shifting J.R. Moseley and Brent Dixon to the front. Moseley grabbed the lead in turn one as he slid up in front of Dixon. With Dixon slowing up to keep from turning Moseley around, Kenny Collins slipped by to grab second. Moseley went on to win ahead of Collins and Dixon, with Cla Knight fourth and Dre Benfield fifth.

Craig Vosnergen of Perth, W. Australia, powered into the lead from the topside on the opening lap and pulled away to win the first consolation by 2.104 second ahead of Clayton Turner. Peyton Freeman finished third, with Dennis Franklin and Drew Collins rounding out the top five to grab the final transfer spots. Collins survived a tense moment when he tagged the wall, but continued on to hang onto the final transfer position. Vosbergen jumped the cushion on the opening lap, collecting Robby Moses to force a complete restart.

Bumping the Super Late Models to the second feature as wet weather approached, officials made the first call for staging at 10:05 p.m. ...  Cloudy skies on a humid Georgia afternoon greeted Ray Cook’s Schaeffer’s Southern Nationals on Thursday night. With rain forecast for late Thursday evening, officials were working to move the program along. … After a few sprinkles put a shine on the track surface while cars from support divisions were getting on and off the track, Cook instructed all 12 cars in the first group to make about three laps to whip the surface back into shape before qualifying. … With the series making its first-ever visit to Toccoa, there are handful of drivers who have never been to the uniquely shaped 3/8-mile oval. Surprisingly, Donald McIntosh of Dawsonville, Ga., is one of them. Dawsonville is only about 65 miles from Toccoa. … Eric Wells of Hazard, Ky., is among five drivers giving up their perfect attendance record. Wells, who didn’t plan to run the entire series, was the tour’s points leader after the first two races. … With Wells skipping Thursday’s race, Dale McDowell of Chickamauga, Ga., unofficially inherits the points lead. Like Wells, McDowell wasn’t sure if he’d tackle the entire series, but for now at least, the team opted to forego a trip to Nebraska and stay closer to home. … Cade Dillard of Robeline, La., is still trying to decide if he’d run the rest of the series. Dillard missed the tour opener at Wythe Raceway in Rural Retreat, Va., before jumping on the series at 411 Motor Speedway in Seymour, Tenn. For now he plans to stick with it through Sunday’s race at Rome (Ga.) Speedway.

To the delight of his hometown crowd, Casey Roberts of Toccoa, turned the overall fastest lap in qualying. Roberts went out in the first group and turned a lap of 11.960 seconds, drawing loud cheers from the crowd. The time stood the rest of the way and Roberts earned the pole for the 35-lap main event. Brandon Overton, with a lap of 11.966 was the fastest in the second group and will start on the outside of the front row alongside Roberts in the feature.

Dipping out of East Tennessee, the third round of the Schaeffer’s Southern Nationals hits Toccoa Raceway, a 3/8th-mile oval hosting its first-ever event on the Ray Cook-promoted series. Originally scheduled as the tour’s fourth event, Toccoa is now the third series race after a July 16 rainout at Volunteer Speedway in Bulls Gap, Tenn.

Eric Wells of Hazard, Ky., leads Dale McDowell of Chickamauga, Ga., by four points after two events. McDowell won the opener at Wythe Raceway in Rural Retreat, Va., and Cory Hedgecock of Loudon, Tenn., won Tuesday at 411 Motor Speedway in Seymour, Tenn. Wells has a pair of podium finishes, but hasn’t decided whether or not he’ll follow the duration of series. Thirteen drivers had perfect attendance after two events.

Thursday’s Super Late Model program includes hot laps, time trials, heat races and a 35-lap main event. Entries will be split into two groups for time trials with the top two qualifiers from each group earning first- and second-row starting spots for the main event. Heat races will set the remainder of the lineup.