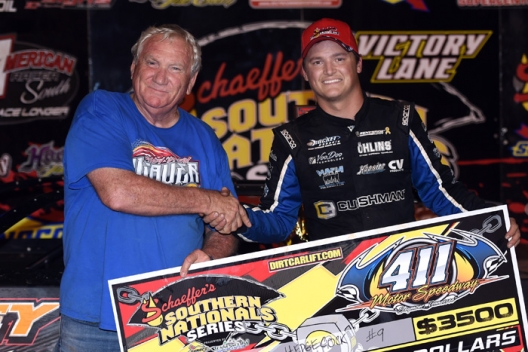 Clocking the night’s overall fast time to start on the pole of the 35-lap feature, Hedgecock edged ahead of race leader Michael Chilton of Salvisa, Ky., at the line on lap 15, holding off late-race charges from Eric Wells of Hazard, Ky., for a $3,500 payday in the second round of Southern Nationals action.

“It got a little black, so that helped us a little bit,” Hedgecock said in victory lane. “Them cautions, it just took me a couple of laps to get going, get my rhythm back. All in all, I’ll take it. This place is awesome. I’m tickled to death they tried to get it in. We brought it on the open trailer just knowing it was going to rain.”

Rolling around the top side, it was second-starting Chilton charging to the front of the field at the drop of the green flag. As the race leader approached lapped traffic on lap 13, Hedgecock was able to close the gap between himself and Chilton, with the pair crossing the line almost side-by-side two circuits later. Pulling away for good on lap 16, Hedgecock scored his 12th victory of the 2018 season, his third at 411.

“We were pretty good,” Hedgecock said. “I needed to maybe get in a little harder down there on the bottom. But every time I did, the carburetor would stumble. We’ll take it any way we can get them.”

Throwing everything he had at Hedgecock in the final laps, sixth-starting Wells finished runner-up. After leading the first 14 circuits, Chilton ran third, with Brandon Overton of Evans, Ga., rallying from the 12th starting spot to finish fourth. Advancing from the 14th starting position, Casey Roberts of Toccoa, Ga., rounded out the top five.

“The car was really good,” Wells said. “This is our first time here. … Early on I noticed everyone was running that bottom. I had the top to myself. So I figured I was either going to run sixth or pass cars. So I got up there and it worked out for us.”

After leading early, Chilton fell back to third on a mid-race restart. With the race’s final caution setting up a green-white-checkered finish, Chilton challenged Wells in the final laps, rounding out the podium at the finish.

“It’s not too bad to come out of here with a top-three against these guys,” Chilton said. “I think we were probably on the wrong tire choice by the looks of what everybody else had. I think I didn’t run hard enough early in the race either. I tried to be too conservative there and Cory got around me. Eric got around me on that top and I got to hammering it pretty hard. If I’d had a (different tire), we might have won, might not have. We’ll see next time.”

Notes: The race was slowed by three cautions. … The first yellow flag waved on lap 19 when third-running Randy Weaver spun in turn four, retiring early. … Fourth-running Shanon Buckingham spun on the backstretch to draw a caution on lap 24. … A yellow flag flew on the white flag lap when Tommy Kerr slowed in the bottom of turns three and four. … The miniseries returned to 411 for the fifth straight season. … Jason Welshan of Maryville, Tenn., was the winner of the Crate Late Model feature.

Outside pole sitter Brandon Overton shot to the lead at the drop of the green flag, as Joey Coulter and Casey Roberts raced side-by-side for second. Overton began stretching his lead early, with Roberts pulling ahead of Coulter to take second around the halfway mark. As the white flag waved, Roberts began to close the gap between himself and the race leader, but it was Overton taking the checkers.

Rolling around the top side, Cla Knight pulled ahead of fellow front row starter Kenny Collins to take an early lead. With Knight showing the way out front, Jason Hiett challenged Tommy Kerr for the third-place spot at the halfway mark. As the laps clicked off, Collins pulled alongside Knight but was never able to make a pass for the lead. Knight edged ahead of Collins at the line to win the consolation.

Local favorite Cory Hedgecock of Loudon, Tenn., was Tuesday’s overall fast qualifier, tripping the clock with a time of 13.499 seconds. With the top five drivers from each qualifying group locked in to the main event, Hedgecock will start on the pole of the 35-lap feature. As the fastest qualifier in his respective time trial group, Michael Chilton of Salvisa, Ky., will start outside the front row of the feature lineup.

Making his first Super Late Model start since suffering an injury in an April 2016 crash at East Alabama Motor Speedway in Phenix City, Randy Weaver of Crossville, Tenn., is among Tuesday’s field of 31 cars at 411. Weaver, who finished runner-up in last Friday’s Crate Late Model feature at his home Crossville Speedway, was the winner of the inaugural Southern Nationals event at 411 back in 2014. … Cade Dillard of Robeline, La., has made the 12-hour haul to race with the Southern Nationals over the next few days. If things go as planned, Dillard will remain with the tour through Sunday’s event at Rome (Ga.) Speedway. … Eric Wells of Hazard, Ky., who finished third in Saturday’s Southern Nationals opener at Wythe Raceway in Rural Retreat, Va., is making his first-ever appearance at 411. … Cory Hedgecock of Loudon, Tenn., returns to 411 after scoring his first career World of Outlaws Craftsman Late Model Series victory at the Seymour oval back in June. Hedgecock’s first-ever Super Late Model victory also came at 411. … Dale McDowell of Chickamauga, Ga., is back with the tour after winning Saturday’s season-opener at Wythe. He's also a former winner at 411. … The Double Down Motorsports team of Shanon Buckingham of Morristown, Tenn., and Robby Moses of Maryville, Tenn., arrived at 411 later than initially planned after experiencing hauler problems on the way to the racetrack. … Hometown driver Ryan King is pulling double duty in the Super and Crate divisions.

After Monday’s event at Volunteer Speedway in Bulls Gap, Tenn., was rained out, the Schaeffer’s Southern Nationals Series returns to action on Tuesday at 411 Motor Speedway in Seymour, Tenn. The miniseries visits the 3/8-mile oval for the fifth straight season.

Donald McIntosh of Dawsonville, Ga, is a two-time and defending Southern Nationals winner at 411. Along with McIntosh, Cory Hedgecock of nearby Loudon, Tenn., is among other drivers who have had past success at 411. Hedgecock scored his first career World of Outlaws Craftsman Late Model Series victory at the Seymour oval earlier this year and will be looking for his first Southern Nationals victory on Tuesday night.

After a single event, Dale McDowell of Chickamauga, Ga., tops the series points standings over Vic Hill of Mosheim, Tenn., and Eric Wells of Hazard, Ky. While none of the three drivers have expressed plans to follow the entire miniseries, they will likely be on hand for select events throughout the remainder of the tour.

Tuesday’s program will include hot laps, time trials, two consolations and the 35-lap feature. The top five cars from each time trial group will be locked in to the feature, with the top five finishers from each consolation transferring to the main event. Provisionals will make up the final rows of the feature lineup. Crate Late Models are among other divisions that will be in action.