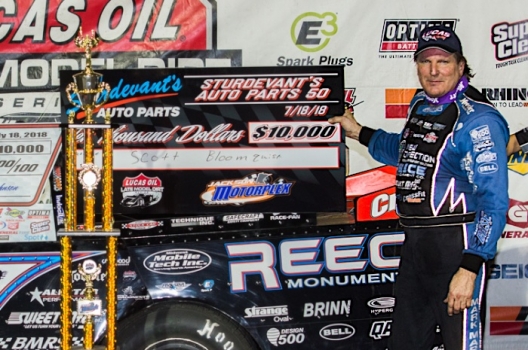 JACKSON, Minn. — Another new track, another victory for Hall of Famer Scott Bloomquist.

The Mooresburg, Tenn., driver who prides himself on winning his first trip to racetracks swept the night’s action at Jackson Motorplex by setting fast time, winning a heat race and leading all the way in Sturdevant’s Auto Parts 50 for his series-leading seventh Lucas Oil Late Model Dirt Series victory of the season.

“That’s what I told the boys when we got here, we came in here, and I said, ‘Well, this one’s a lock.’ ” the winner said with a hearty laugh. “There’s just something about coming somewhere for the first time.

The pole-starting Bloomquist built a lead as big as three seconds while cruising most of the way, then turned back a late charge from series points leader Jonathan Davenport of Blairsville, Ga., to win by four-tenths of a second at the 3/8-mile layout.

Josh Richards of Shinnston, W.Va., was third with Bobby Pierce of Oakwood, Ill., and 13th-starting Brandon Sheppard of New Berlin, Ill., rounding out the top five in a race where several series regulars were pitside at the finish.

Drivers were getting their first look at the 3/8-mile oval that hadn’t hosted a Late Model event for 30 years, and everyone seemed to like what they saw — and raced on — in comparing it favorably to a miniature version of the history Knoxville (Iowa) Raceway, the half-mile oval the Lucas Oil Series visits each season.

“That’s absolutely what it reminded me a lot of,” Bloomquist said. “That berm around the bottom very similar … it holds moisture better than Knoxville. Knoxville usually blacks off and goes away a little bit quicker than this. I was surprised it lasted through the whole feature like it did. We were hammer down the whole race. The groove moved around a little bit, the bottom got slower in (turns) one and two and we moved up. I never really knew where (Davenport) was at. We just felt comfortable, we were hooked up up top … anywhere.

“I wish we could race at more racetracks like this,” Bloomquist said, looking ahead to a three-day weekend for the $53,000-to-win Silver Dollar Nationals at I-80 Speedway in Greenwood, Neb. “You know, we didn’t tear nothing up, the car just needs a little bath, and we’re ready to rock ’n roll the rest of the weekend … this place is racy. I’ve not seen too many places like this in my entire career.”

Davenport didn’t get rolling until the second half of the race, and while he cut into Bloomquist’s straightaway lead to less than a second late in the race, he was pleased with his first top-five on the series since July 3.

“We just keep improving and every time out this past week or so, we keep improving the race car, keep improving everything on it. Our crew’s been working hard and I’ve just gotta thank them for everything they do,,” Davenport said. “This is an awesome facility. You’d never know it way up here, you know, it’s just in the middle of nowhere. I’d never even heard of the place, but ya’ll really got something special here for sure.”

Davenport wished he could’ve given Bloomquist “a little bit better run for his money (so it wouldn’t have been) a lock for him. We gave it all we had and we’re getting better and catching on fire right here when it’s big-money month.”

Richards, second in the points chase to Davenport and just ahead of Bloomquist, joined his title contenders on the podium with his second straight top-three finish.

“Man, this place is awesome … Everyone kept saying, ‘It’s like a mini Knoxville, it’s like a mini Knoxville.’ And it’s like, holy cow, they’ve done a phenomenal job here and you can race all over it. It looked like it was going to be bottom-dominant and then you get back up top later and it was starting to get pretty slick off of (turn) two,” Richards said. “This is a beautiful place and I hope we get to come back a lot more.”

The top three avoided being part of a pair of four-car pileups that required lengthy cleanups during the 50-lapper. No one was injured, but the wrecks created plenty of havoc.

Before a lap was complete, Earl Pearson Jr., Brandon Sheppard, Hudson O’Neal and Don Shaw ended up in a turn-two melee with the driver’s side wheels of O’Neal’s car atop Shaw’s machine.

The mess required a 15-minute cleanup under a red flag with O’Neal and Shaw suffering too much damage to continue.

The next pileup was at the top of the backstretch on a lap-14 restart with Clint Bowyer Racing teammates Darrell Lanigan and Don O’Neal wadded up along with Tim McCreadie and Mason Zeigler. The No. 14 of Lanigan, who was running fifth, was towed off the track while O’Neal was able to continue and finished ninth.

Other cautions appeared on lap 14 (Clay Daly pulled his smoking ride to the infield), lap 17 (when Gregg Satterlee lost a right-rear wheel in turn two that bounded down the backstretch) and lap 34 (when seventh-running Jimmy Owens coasted to a stop in turn one).

Notes: Bloomquist notched his 93rd career Lucas Oil victory. … Third-finishing Josh Richards said his carburetor was stumbling on restarts and he got together with Darrell Lanigan on the lap-14 restart that ended with Lanigan’s retirement. “It was unfortunate that it ended those guy’s night and messed their cars up,” Richards said during his postrace interview on the frontstretch. … Fifth-finishing Brandon Sheppard rallied from the rear in his Rocket Chassis house car after being part of the first-lap wreck. … Don Shaw’s first Lucas Oil Series appearance ended without him completing a lap. … Jackson’s race marked the second Lucas Oil race in Minnesota and the second this season after a visit to Spring Valley’s Deer Creek Speedway.