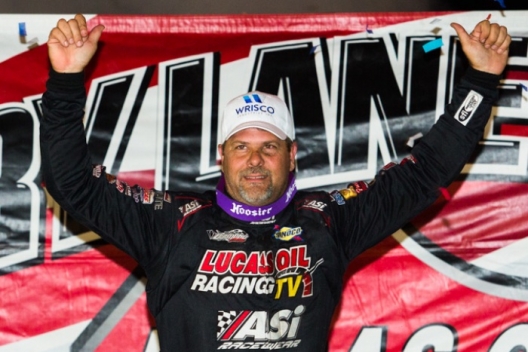 ABERDEEN, S.D. — It’s no secret on the Lucas Oil Late Model Dirt Series — Earl Pearson Jr. is the man to beat when the low groove is fast.

“He’s probably the best at bottom-feeding when the track comes like this,” Bobby Pierce said Tuesday at Brown County Speedway.

Added Josh Richards: “Usually if the bottom comes in, he’s going to be up front.”

And that’s exactly where Pearson was in outdueling Pierce over the final 10 laps at the high-banked 3/8-mile oval, taking the lead for good on lap 48 to secure his fourth Lucas Oil Late Model Dirt Series victory of the season.

The low-running Pearson started eighth and got to second on a lap-40 restart to set up a lengthy side-by-side duel with the high-running Pierce, who eventually slipped over the banking and slipped to third behind Richards at the checkers when he lost power on the last lap.

“I could hear Bobby out there just giving it all she had,” said Pearson, the Jacksonville, Fla., driver who has two victories in his last three series starts. “And I just stayed on that bottom just putt-putting around. It worked out for us.”

Richards, the Shinnston, W.Va., who started alongside Pearson on the fourth row, barely got second at the checkers over Oakwood, Ill.’s Pierce, whose throttle hung in his Dunn Benson Motorsports car virtually the whole race. Ricky Weiss of Headingley, Manitoba, got fourth and Don O’Neal of Martinsville, Ind., rounded out the top five finishers.

Outside front-row starter Scott Ward of Watertown, S.D, grabbed the lead from the outset and led eight of the first nine laps before Pierce took command. Ward held the second spot through most of the next 19 laps before retiring pitside on lap 29 without drawing a yellow.

While the Pierce-Ward battle was a good one early, Pierce drew away to lead comfortably through the middle stages. But inside the cockpit, Pierce had his hands full with the hung throttle that forced him to make use of his special accelerator pedal.

“It has a piece above your foot that, if it sticks, you just take your foot up and raise it up about 6 inches, and that’s how you let off the gas if it sticks. So every single corner I was having to do that, at least a few times in the corner,” Pierce said. “The top was really the only spot I could run.”

Pierce was able to hang on into the late stages as a lap-34 caution for Brandon Sheppard — knocked off the track after apparent contact with Pearson — reset the field with series points Jonathan Davenport in second.

On the restart, Pearson jumped up to third while Davenport slipped back to fourth, then fell from contention when he suffered nosepiece damage on the 40th lap amid contact that sent Gregg Satterlee spinning over the turn-four banking the second and final yellow.

The caution with 10 laps remaining set up the Pierce-Pearson showdown with Pierce motoring on the high side while Pearson hugged the track’s inner groove. Pearson went ahead on lap 41, but Pierce — still frequently ahead on the backstretch but not the frontstretch — stayed right with him.

Pierce fought back ahead to lead lap 47, but he slipped over the banking and let Pearson slip away in the final laps before his car lost power altogether on the final circuit.

“I could hear him up there with five to go — he was giving it all she had — and the next thing I know I just didn’t hear him any more,” Pearson said.

Committed to the top, Pierce knew it would be difficult to repel Pearson’s charge.

“When Earl showed his nose in there, you know, he’s probably the best at bottom-feeding when the track comes like this,” Pierce said. “When he was there, I knew I was in trouble and I was going to have to drive even harder.

“Honestly that was the hardest race I’ve ever drove, because I’ve never had to (battle a hung throttle) before. That just completely throws off your line. That’s kind of why I shoved off the track there … I got in a push and I wasn’t quick enough to raise my foot up and bring the gas pedal up. And the I blew up I guess on the last lap there. Something happened …

“I kind of limped it to the line there to try and stay ahead of Josh, but he ended up getting me. All in all, just a bittersweet night.”

Richards termed the battle of him “pretty crazy,” but couldn’t quite put his Best Motorsports entry into the mix.

Pearson was glad he could rise to the occasion.

“Lapped traffic got pretty tight there, but what a heckuva show. At heat-race time I thought we was in trouble with the racetrack, but them guys came out here and watered it and worked it and you could race all over it,” the winner said. “We’re coming into the money races here shortly. If we can keep this momentum going, hopefully we can get some of them, too.”

A busy week for the Lucas Oil Series continues Wednesday at Jackson (Minn.) Motorplex before the national tour competes for three straight nights at I-80 Speedway in Greenwood, Neb., for a weekend capped by the $53,000-to-win Silver Dollar Nationals. DirtonDirt.com is providing live pay-per-view productions each night.

Notes: Pearson won five days earlier at Tri-City Speedway in Granite City, Ill.. … There were a few mea culpas in victory lane with Pearson recognizing his contact with Brandon Sheppard and runner-up Josh Richards apologizing to Jonathan Davenport for contact when he ran out of racing room. … Davenport, the series points leader, settled for eighth place and his fourth consecutive finish outside the top five. … Hudson O’Neal of Martinsville, Ind., started 15th and was up to third on the lap-34 restart, but he slipped back to ninth before salvaging a sixth-place finish at the checkers just behind his father, Don. … Six-time series winner Scott Bloomquist’s qualifying time was disallowed after his qualifying effort was made on an unmarked right rear tire; he finished last in a heat race and started on the tail of the feature. He finished 18th.