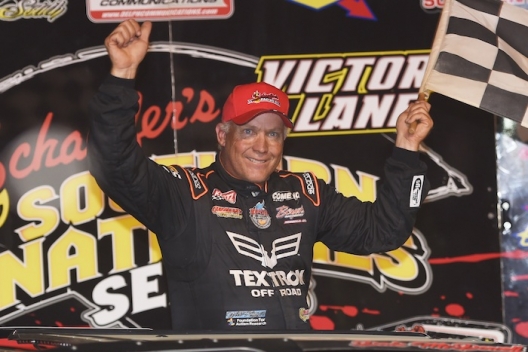 Charging to the front of the field at the drop of the green flag, the Chickamauga, Ga., driver led the entire 53-lap distance, stretching his lead over second-place finisher Vic Hill of Mosheim, Tenn., in the final circuits for a $10,000 victory at the high-banked Virginia oval.

“I missed a little bit qualifying but we were still pretty competitive right there,” McDowell said after the race. “In the heat race I was able to get the start. That’s what it’s about. The competition level is so close. You’ve got to capitalize on situations like that. … It was a good night for us.”

While it was McDowell showing the way out front early on, second-starting Brandon Overton of Evans, Ga., was able to reel in the race leader as the pair worked their way through lapped traffic. With multiple cautions slowing his charge, Overton retired early on lap 29. From there, it was smooth sailing for McDowell, who was never seriously challenged for the lead.

“Lapped traffic got a little bit sketchy there,” McDowell said. “This place is so fast. You make a little bitty mistake and it turns into something big. So just being careful through that. But it ended up with the good Lord shinning on us tonight. This was our night.”

As a former Southern Nationals winner at Wythe, Hill has had a lot of success at the high-banked half-mile. But he knew he didn’t have anything for McDowell near the end of Saturday’s 53 laps.

“I’d raced with Shanon (Buckingham) for 20-30 laps and I had a little softer tire on than them guys did,” Hill said. “I knew I couldn’t spin and tear it up. I knew it was getting to the end so I raced Shanon pretty hard. … When I got around him I think I kind of used up as good as I could get to make any kind of challenge on Dale. But it’s a good night.”

A podium finish was a solid end to the weekend for Wells, who picked up a $2,000 victory on Friday night at Ponderosa Speedway in Junction City, Ky.

“We was pretty good hot lapping and didn’t tighten up enough early,” Wells said. “We just over-adjusted a little there in the feature. Those first 15 laps I felt pretty good and the longer we ran the tighter I got. But it’s be sever or eight years since we’ve been here and we’ve got good notes for when we come back.”

McDowell’s victory marks only his third-ever on the Southern Nationals tour. Though he’ll top the series points standings heading into Monday’s event at Volunteer Speedway in Bulls Gap, Tenn., McDowell and brother/crew chief Shane haven’t decided whether or not they’ll follow the miniseries in its entirety this season.

“I asked Shane today what we were going to do,” McDowell said. “I’ve talked about going to I-80 and running some of those races. So I guess he and Jimmy will talk it over and figure out what we’re going to do. They’ve just got to let me know.”

Notes: McDowell scored his third career Southern Nationals victory and sixth win of the 2018 season. … Second-running Brandon Overton retired early on lap 29. … The first yellow flag waved on lap 14 when Joey Coulter spun in turn two. … Fifth-running Steve Casebolt drew a caution on lap 24 when he came to a stop in turn three, retiring to the pits with front-end damage. … A yellow flag flew on lap 43 when Dwayne Joyce slowed in turn two. … After running as high as second, Shanon Buckingham slowed in turn four with a right-rear flat to draw a caution on lap 50. …  With all 31 entries eligible for Saturday’s feature lineup, it marked the largest starting field in series history. … Of the 30 cars starting the feature, 23 took the checkered flag. … Wythe hosted the Southern Nationals opener for the eighth consecutive season.

Rolling around the high side, Vic Hill edged ahead of fellow front-row starter Johnny Pursley to lead the first lap. Pursley attempted to slip back by Hill, only to have his challenge thwarted. Hill won the heat, with Pursley and Dennis Franklin rounding out the podium.

Sliding ahead of fellow front-row starter Ross Bailes, Brandon Overton took an early lead. With Bailes slipping back to third in the early running, the advantage went to Steve Casebolt, who held to second-place spot at the halfway mark. Stretching his lead, Overton won the heat race, with Casebolt finishing second. Bailes outran Casey Roberts to finish third.

Charging around the outside groove, Shanon Buckingham edged ahead of pole sitter Aaron Ridley to take an early lead. With Buckingham holding a comfortable lead, Forrest Trent attempted to reel in Cla Knight for third in the final laps. Buckingham won the heat race, with Ridley finishing second. Knight held off Trent to run third.

Outside poleistter Dale McDowell shot to the front of the field at the drop of the green flag, with Eric Wells slipping past polesitter Donald McIntosh for second. As McDowell pulled away early, Wells and McIntosh battled side-by-side for second, with Wells holding the advantage at the halfway mark. Dominating all eight laps, McDowell won the heat, with Wells and McIntosh rounding out the podium.

Piloting the Big Frog Motorsports No. 58, former Schaeffer’s Spring Nationals champion Donald McIntosh of Dawsonville, Ga., was Saturday’s overall fast qualifier, tripping the clock with a time of 16.531 seconds. McIntosh will start on the pole of the first of four eight-lap heat races. As the quickest qualifier in his respective time trial group, reigning Southern Nationals champion Brandon Overton of Evans, Ga., will start on the pole of the third heat race.

The 14th annual Schaeffer’s Southern Nationals Series gets under way on Saturday night with a $10,000-to-win event at Wythe Raceway. The half-mile Virginia oval hosts the miniseries opener for the eighth consecutive season.

Vic Hill of Mosheim, Tenn., was the winner of last year’s Southern Nationals stop at Wythe. Among other recent Wythe winners expected to be on hand Saturday night is Dale McDowell of Chickamauga, Ga., who picked up the win back in 2016.

Brandon Overton of Evans, Ga., the reigning series champion, has expressed plans to run the entire miniseries in a Billy Franklin-owned entry. Among other drivers that have committed to following the series in 2018 are Shanon Buckingham, Craig Vosbergen and Donald McIntosh.

Saturday’s program will include hot laps, time trials, four heat races and the 53-lap main event. Competitors using all-aluminum engines who have raced at least twice in 2018 and time-trialed within 1.5 seconds of the fifth overall fast qualifier will be eligible to join the feature starting field.