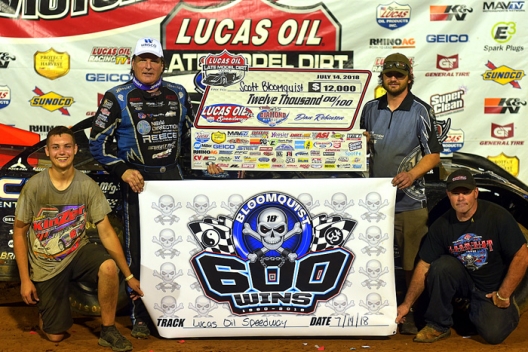 WHEATLAND, Mo. — Scott Bloomquist of Mooresburg, Tenn., completed a sweep of the season’s biggest Dirt Late Model races at Lucas Oil Speedway on Saturday with a $12,000 victory in the CMH Diamond Nationals.

The Hall of Famer overtook race-long leader Jimmy Owens of Newport, Tenn., on the 32nd lap and led the rest of the way in the 50-lap main event for his tour-leading 92nd career Lucas Oil Late Model Dirt Series and the 600th feature victory overall in his career.

Another milestone victory in a career full of them left Bloomquist a little wistful in victory lane during a season when shoulder pain caused by arthritis threatened to end his season prematurely.

Bloomquist continued another good year on the Lucas Oil Series with his sixth victory in taking the checkers 2.662 seconds ahead of the tour’s leading Rookie of the Year, Mason Zeigler of Chalk Hill, Pa. Earl Pearson Jr. of Jacksonville, Fla., the previous night’s winner at Tri-City Speedway in Granite City, Ill., was third with Lucas Oil Midwest LateModel Racing Association regular Will Vaught of Crane, Mo., fourth in the event co-sanctioned by MLRA. Owens dropped to third on lap 34, fourth on lap 38 and then another position with two laps remaining to settle for fifth.

Series points leading Jonathan Davenport of Blairsville, Ga., salvaged the night after struggling in preliminaries with a 22nd-to-sixth charge in a race slowed by a pair of mid-race cautions. A lap-27 yellow flag flew for Payton Looney, who was running 10th when he ended up getting into the turn-four wall, and another caution appeared three laps later for debris near the same spot.

Bloomquist dueled his fellow Tennessean Owens through the middle stages before making an outside pass to take command on lap 32. He picked up the race's diamond ring in victory lane in adding the victory to his $30,000 Show-Me 100 triumph over Memorial Day weekend.

“We had to work a little bit for it,” Bloomquist said. “Jimmy was pretty good … we raced pretty hard there, you know? He wasn’t going to give nothing. We earned that one. It feels really good.

“It takes everybody, it takes all our sponsors, you look at the the names on this car, and they mean so much to us,” he added, considering win No. 600. “You know, you go through ups, downs, you go through a lot of things in a full career. You can look back on all of it, you learn from a lot of things … (as you get) to the end, it’s like ‘Surely not!’ you know.

“We’re surely closer to our winter years in life than we are spring. We know inevitably it’s coming, but I think we can take what we learned with this (arthritis-pained arm) and just go forward with that. Sometimes you’ve gotta get a second opinion and we’re real happy to be out here.”

Will Bloomquist take a shot at 700? It took him seven years, nine months and 19 days to win his last 100 races, and he’ll have to ponder that.

Zeigler matched his best series finish of second (July 2 at Sharon Speedway in Hartford, Ohio) in losing to a driver more than twice his age.

“I had the car to win tonight. I just got outdrove by a 60-year-old with arthritis,” Zeigler cracked in victory lane, adding a few years to the winner’s age. “I just love to be able to come out and compete. Hopefully one of these days we’re going to get a win.”

Pearson, who started fifth, figured third was about the best he was going to do, but it was a significant improvement over two series starts earlier this season at Lucas Oil Speedway (18th and 13th).

“We definitely got in lapped traffic and Zeigler was battling with them guys,” Pearson said. “We got to him, but I don’t know if we could’ve passed him. We was a little bit too tight running around the bottom. But I mean, it was a heckuva show for the fans, I’m sure. At one time they was three-wide for the lead. … We’ve gotta work on our car a little bit, but we were a lot better than the last time we were here.”

He’s hoping to extend his string of two straight podium finishes as the tour heads to South Dakota, Minnesota and Nebraska over the night week.

“It’s going good right now if we can just keep the momentum going,” Pearson said. “We’ve got a big swing through the Midwest right here and we’ll just see how it turns out.”