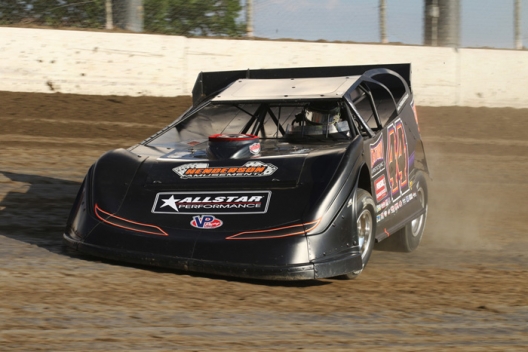 OGILVIE, Minn. — The Barry Wright Race Cars house car team got its favorite car back in action. And driver Chris Madden of Gray Court, S.C., got it back in victory lane.

After struggling to find success in a backup car, Madden returned to his primary ride Saturday at Ogilvie Raceway and raced to his fifth World of Outlaws Craftsman Late Model Series victory of the season, earning $10,000 by taking the checkers three seconds ahead of Brandon Sheppard of New Berlin, Ill.

Madden, whose primary car was left in a heap after a July 6 accident at Dubuque (Iowa) Speedway, credited his crew for getting the No. 44 car race-ready again as it carried him to his second series victory in as many years at Ogilvie.

“It was actually fun,” the 43-year-old Madden said in victory lane. “Man, what a racetrack. This is an awesome place here. You can race all over this thing and we love coming here to race at this place.”

Madden took the lead from front-row starter Rick Eckert of York, Pa., on the 10th lap — the same time Sheppard went to second — and kept Sheppard in check the rest of the way for his fifth series victory of the season and 20th of his career.

Sheppard, who finished fourth of better for the sixth consecutive race, got within three-tenths of second with 10 laps remaining, but Madden sliced through lapped traffic to rebuild his lead and cruised the rest of the way.

Polesitter David Breazeale of Four Corners, Miss., the tour’s rookie points leader, dropped to fifth on the first lap and ended up eighth as the series made its third appearance at the Minnesota oval.

While Madden was in control the final 41 laps, he felt like things got a little too close for comfort a few times amid traffic.

“My car was really good enough to where I could move around more than actually what I (did) there, so I should’ve kind of moved around a little bit earlier on some of those lapped cars,” he said. “I let Brandon catch up with me there a time or two, just kind of not doing what I needed to be doing. We got the job done tonight.”

Sheppard, winner of three of the last six series events, fell short in his bid for his ninth victory of the season.

“We’d like to have gotten the win tonight — everybody would’ve I guess — it’s just really a big confidence booster to know that we can keep this thing up in the top three,” said Sheppard, who also posted a runner-up finish the previous night at River Cities. “We’ve got a really good piece. I made a few wrong moves there that probably lost me that race, but all in all, a good job to Chris.”

Eckert, the 2011 series champion rebounded from his early retirement the previous night with his first podium finish of the season on the national circuit.

“We’re definitely building. We can see ‘em now. We’ve just gotta figure out how to keep ‘em behind us,” Eckert said, thanking his crew for their hard work in swapping powerplants earlier in the day. “This is an awesome racetrack. We can run against the inside or against the outside wall or all over. This is the kind of place we’d like to race weekly … hat’s off to the track crew.”

Eleven drivers finished on the lead lap in a 50-lap feature slowed by a single caution for Tyler Erb, who drew a yellow on the 13th lap when he punted an infield tire barrier in turn one.

Notes: Madden has led the most laps on the tour with 380 on the season. … He increased his earnings to $137,900, second to Brandon Sheppard. … Madden posted his 14th podium finish in 27 season starts. … Fourth-place finisher Mike Marlar held onto the series points lead after break his tie with Madden atop the series points heading to River Cities. … Ricky Weiss of Headingley, Manitoba, had another solid run on the series with a sixth-place finish at Ogilvie; his fourth-place finish the previous night at River Cities was his career best on the tour. … Don Shaw, a $3,000 winner the previous night at I-94 Speedway in Fergus Falls, Minn., retired on the 23rd lap.