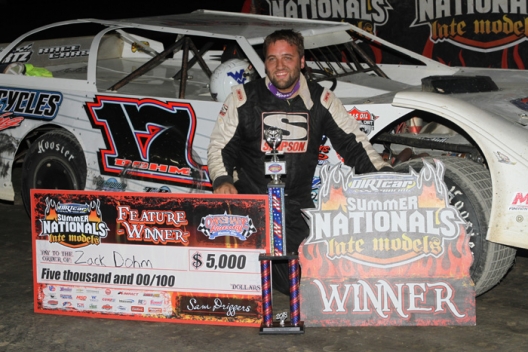 With the 3/8-mile oval’s slick-surface reputation prompting him to make the six-hour haul from Cross Lanes, W.Va., to compete at the track located outside Toledo, Dohm enjoyed a triumphant debut. He overtook six-time Oakshade champion Rusty Schlenk of McClure, Ohio, for the lead on lap 29 and held on to register a $5,000 victory in Friday night’s 40-lap DIRTcar Summer Nationals feature that kicked off the facility’s 20th annual Birthday Race weekend.

“It’s pretty cool,” Dohm said of winning in his first-ever start at Oakshade. “We don’t do that very often, but I figured this place would be right up our alley — slick, circle, don’t pinch the car off. That’s what we like, so I’m glad we came.”

Dohm, 29, beat Schlenk to the finish line by 0.476 of a second to tally his first-ever Hell Tour triumph. His limited number of previous Summer Nationals appearances included two noteworthy runs at Brushcreek Motorsports Complex in Peebles, Ohio, in 2012 when he won a heat race only to break an axle on the original start of the feature and in ’13 when he finished fifth in the A-main.

Schlenk, who led the race’s first lap and later paced laps 25-28, and a late-charging Brian Shirley of Chatham, Ill., were nose-to-tail right behind Dohm crossing the finish line with Frank Heckenast Jr. of Frankfort, Ill., and Billy Moyer of Batesville, Ark., close behind in fourth and fifth, respectively.

Matt Miller of Whitehouse, Ohio, a three-time Birthday Race winner who was back in action at Oakshade’s marquee event with car owner Rick Delong after sitting out last year’s weekend, faded to a sixth-place finish after leading laps 2-24.

The 31-year-old Schlenk appeared primed to finally reach victory lane for the first time on this year’s Summer Nationals after grabbing the lead from Miller on lap 25 but he couldn’t turn back Dohm, who made his winning move on the inside of turn two on the 29th circuit. A lapped car hampered Dohm over the final two circuits but he smartly stayed behind the slower machine to prevent Schlenk from seizing the optimum inside line.

Dohm, who started fourth after recording the evening’s fastest qualifying lap and winning a heat race, was proud to pass both Schlenk and Miller — two acknowledged Oakshade masters — but modestly downplayed the accomplishment. He felt that the race just came to him and his Vic Hill-powered Swartz Race Car.

“They got tons of laps around here,” Dohm said of Schlenk and Miller. “It’s obviously tough to beat them here, but honestly, everything just worked out right for us. I don’t know that I had the best car. I think earlier today, before it rubbered up, I think we did have the best car, but of course I redrew fourth (starting spot). We took off and it felt really good, and then (the surface) started taking more and more rubber and they were kind of driving away from me.

“The first lap it didn’t feel like there was any rubber to me, and then every lap it just seemed like it changed a little bit. It got more rubbered up. I figured by the end of the race the whole thing would just be rubber, but, in the middle of (turns) one and two, I don’t think it was rubbered up at all. I think it was pretty slick, so as long as you could get through there and wait on it and not overshoot it, you could launch up off there (in turn two) because there was plenty of rubber.

“I played with my brakes, I went from three-wheel to four-wheel, and just found something that I liked,” he added. “My car was tight around the center … like, whenever I would get in the slick it wouldn’t really want to steer, but on the other side of the slick there was enough rubber to catch it. Off of (turn) four and all the way down the front straightaway it was rubbered hard, and then getting into (turn) one and to the middle (of the corners) was slick, but off of two was pretty rubbered up.”

Schlenk’s failure to stay in that rubber off turn two was the break Dohm needed. After following Schlenk past Miller on lap 25, Dohm stuck close to the leader and was in position to seize command when Schlenk slipped too high on lap 29.

“I think he drove in too shallow and slid across the slick,” Dohm said. “He was probably having as much trouble steering in that slickness as I was. I think he just got in there and slid across it and actually slid up so high that he wasn’t able to get any of the rubber. Maybe he got it a little bit, but I just hooked the bottom and had all four wheels in the rubber.”

Dohm still had to deal with the lapped car driven by Jake Rendel of Adrian, Mich., over the final circuits, though. With Rendel running in the bottom lane Dohm had a big decision to make.

“Nick (Zack’s younger brother) was showing me (signals) and his hands got closer together,” Dohm said, noting that Schlenk and Shirley bunched up being him as he followed Rendel. “Honestly, I was gonna pull out of line and try to pass that (slower) guy on the outside. I was coming out of four and I had been following him for two laps so I was gonna do it in one and two, but the flagman was throwing the move-over flag and the white (flag), so I was like, ‘Hell, I’ll just stay right here and make somebody punt me (to pass). If that’s the way it’s gonna, that’s the way it’s gonna be, but I ain’t gonna move out of line.’

“I just stayed in line and we got it done.”

Schlenk, who has run the entire Summer Nationals schedule this year for the first time in his career, mourned his runner-up finish.

“I was moving around (while leading) trying to find a lane to get through that lapped traffic and I left the door open,” said Schlenk, who matched his best finish of the ’18 Hell Tour. “It was own stupidity. I showed (Dohm) the line when I caught Matt and kind of found the rubber there before anybody else and drove around Matt to get the lead. Then, like an idiot, I left the door open getting into one (on lap 29) and it was over after that. (Dohm) did what he needed to do.

“There were patches of (rubber),” he continued. “That’s kind of what killed me. There’s a rubber patch coming out of two right on the inside and if you could stop your car and slow it down enough you could get in that rubber. I got around Matt that way — I beat him down the backstretch because it was slick on the exit of two on the top — but then you’d get into three and four and it was rubbered up on the bottom and it was locked down on the straightaway. You just had to find the rubber, and I left the door open. I gave it away. I’ll try not to do that tomorrow (in Saturday’s $10,000-to-win finale).”

Shirley, meanwhile, as a fast-closing third. He came from the ninth starting spot to reach the show position with a lap-37 pass of Heckenast.

“We just was biding our time around the bottom,” said Shirley, who clinched his second career Summer Nationals championship the previous night at I-96 Speedway in Lake Odessa, Mich. “The car rotated really good. We just stayed patient, let the positions open up. Some of them guys would slide high in one and two where we could hold down and stay on the bottom.

“After the last couple days of having that little bit of ups and down, well take a solid third and go into tomorrow night with a shot to hopefully go after that $10,000.”

The feature's lone caution flag flew on lap 14 when Australian Paul Stubber spun in turn four while being lapped by Miller. Both Schlenk and Dohm narrowly avoided hitting Stubber’s machine.

Matt Miller shot from third to first on the opening circuit and never looked back en route to a flag-to-flag victory by a narrow 0.390 of a second over Billy Moyer. Polesitter Dan Wallace fell to fourth off the start but rallied to overtake Dona Marcoullier late and finish third.

Rusty Schlenk raced unchallenged the entire distance to defeat Matt Shipley by well over a straightaway. Jason Playter Jr. moved up from sixth to finish third. A caution flew before a lap was completed for Matt Shipley’s turn-four spin and another was put out on lap three for a multi-car scrape off the fourth corner. Brian Ruhlman crossed the finish line seventh but was penalized to 11th by officials for his role in Cameron Pearson's spin on the final lap.

Zack Dohm dominated the action, leading every lap and beating Frank Heckenast Jr. by a commanding 2.283 seconds. A caution flag flew on the opening lap for a backstretch tangle that sent Brian Shirley spinning and Doug Baird piling in; Shirley retained his spot for the restart and went on to finish third.

Zack Dohm's unexpected visit to Oakshade began in fine fashion as he registered the overall fastest lap in qualifying, circling the 3/8-mile oval in 15.917 seconds during the first group. He earned the pole position for the evening's first of four 10-lap heats.

Rusty Schlenk of McClure, Ohio, was quickest in Group 2 with a lap of 16.102 seconds, giving him the pole for the third heat.

Other heat polesitters are Dan Wallace of Toledo, Ohio, and Ryan Unzicker of El Paso, Ill.

Oakshade Raceway’s 20th annual Birthday Race weekend kicks off on a sultry and sunny 90-degree day. … The 43-car field is the largest of the 2018 Summer Nationals — topped the 36-car turnout on June 15 at Sycamore Speedway in Maple Park, Ill. — but is down 16 entries from last year’s Friday-night program that drew 59 cars. … There will be no Hell Tour championship drama for the second consecutive year as Brian Shirley of Chatham, Ill., leads the standings by an insurmountable 173-point advantage over Jason Feger of Bloomington, Ill. … The battle for the $2,000 Champions Week crown sponsored by VP Racing Fuels, however,will be decided at Oakshade. Billy Moyer of Batesville, Ark., leads the standings with 215 points over Frank Heckenast Jr. of Frankfort, Ill. (210) and Rusty Schlenk of McClure, Ohio (195). … Missing from Summer Nationals action for the first time this year is Gordy Gundaker of St. Charles, Mo., who headed home after breaking a rod in his car’s motor Thursday night at I-96 Speedway in Lake Odessa, Mich. … Drivers on the verge of attaining perfect attendance on this year’s Hell Tour are Shirley, Feger, Heckenast and Schlenk. … Matt Miller of Whitehouse, Ohio, is back in Oakshade’s Birthday Race field with car owner Rick Delong after missing last year’s event because Delong did not have a machine race-ready. Miller turned up for the weekend with a fifth-place finish in last Saturday night’s feature at Oakshade. … A surprise long-distance entrant is Zack Dohm of Cross Lanes, W.Va.

The UMP DIRTcar Summernationals begins into its last weekend of points racing with a two-day program at Oakshade Raceway, a series stalwart that will host a pair of complete Hell Tour events for the third straight year. Friday night’s $5,000-to-win show leads into Saturday evening’s traditional 60-lap Birthday Race that boasts a $10,000 top prize.