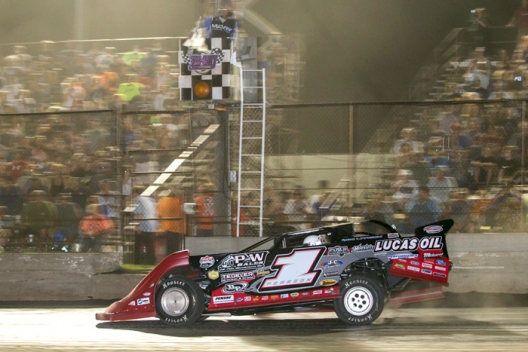 Working his way through the field to join the frontrunners at the halfway mark, Pearson set his sights on Owens, running a close second for several laps. The Black Diamond driver finally pulled ahead of the race leader on lap 37 of 50, leading the remaining distance for his third series victory of the 2018 season.

“(Owens) was awful good,” Pearson said after the race. “He could move around a lot better than I could. I just married myself to the bottom. He slipped up down there a little bit and I just kept my line right around the bottom. … It’s been quite some time since I’ve been up on this stage. But I told them before I went off the stage, ‘A hurricane’s blowing in, so watch out.’”

Pearson said patience was the key to his Tri-City triumph, which marked his 25th career Lucas Oil Series victory.

“It had that little ring around the bottom and I just stayed there,” Pearson said. “I had a couple of good restarts and that helped me get up there to third. The car was good. It turned really good around the bottom. … This car, we ain’t run it in quite some time. But I think every time we’ve run it, it’s run top-five. So I may run it again tomorrow.”

Overtaking early race leader Tony Jackson Jr. of Lebanon, Mo., on lap 34, Owens led only a few circuits before falling to Pearson. But he was still pleased with his second-place finish.

“It was a good run,” Owens said. “I had a good car all night long. … This is definitely an up. You can’t say thanks enough to all your sponsors and all those guys because without them, we’d be way down.”

While McCreadie was able to come away with a podium finish, he was still feeling a bit defeated after Friday’s feature. It was near the end of the 50-lapper that he noticed he was experiencing engine problems.

“It’s been a struggle all year,” McCreadie said. “We should be happy but the motor’s blown up. It’s one of those deals. I didn’t even know I had an issue until I noticed the gauges with like two to go was losing all the water and then I come in and the fuel pump’s broke in half. It’s just one of those deals. We need to get this stuff to run a little bit harder early so we don’t have to start back. All in all to get a top-three is pretty cool.”

Notes: Pearson earned his third series victory of the season and 25th of his career. ... Outside front-row starter Tony Jackson Jr. of Lebanon, Mo., led the first 33 laps but faded to finish eighth. ... Third-place finisher Tim McCreadie of Watertown, N.Y., broke a water pump that dumped water out of his car's engine in the final laps. ... The race was slowed by a single caution. ... Scott Bloomquist pulled into the pits under the yellow running second; he finished a lap down in 18th.