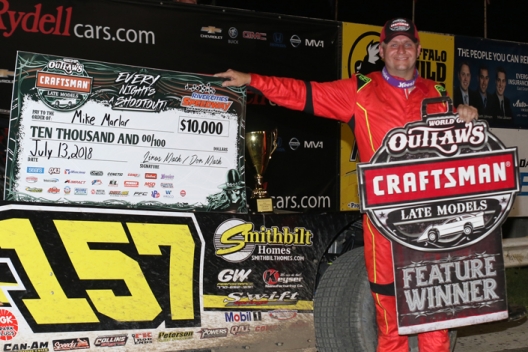 What’s happening? Well, the 40-year-old Marlar is suddenly atop the WoO points chase after he took the lead from polesitter Ricky Weiss on the 21st lap and manhandled his car to a $10,000 victory, his fourth of the season on the national tour.

Marlar added his River Cities victory to another tour triumph seven days earlier at Deer Creek Speedway in Spring Valley, Minn., during a stretch of racing in the upper Midwest.

“To win at these places up here is awesome, just awesome racetracks,” said Marlar, who got out of his car asking for a drink of water after the 50-lapper. “I don’t think I’ve worked that hard in a race car in years, but man. That was a fun race to drive, but there was a lot of times, I was like, ‘Man, I’m going to give this thing away or let loose of this steering wheel or something.’

“Awesome race, and I guess we got the points lead, so that’s cool. We just want to go out and race every night and win some races, and just run good everywhere. Whatever happens happens.”

Marlar led comfortably most of the second half of the race, but runner-up Brandon Sheppard of New Berlin, Ill. — who entered the race with three victories in the last four series races — cut it down to less than a second amid traffic on the final lap.

Devin Moran of Dresden, Ohio, who started sixth but slipped back to 11th early, rallied and took the final podium spot from Weiss at the white flag. The Canadian Weiss, the Headingley, Manitoba, driver who frequently competes at River Cities, was fourth for his best career WoO finish and last year’s race winner Shane Clanton of Zebulon, Ga., rounded out the top five.

Chris Madden of Gray Court, S.C., entered the event tied with Marlar for the points lead, but he retired with apparent mechanical problems on the 38th lap and ended up 15th.

Marlar, who notched his sixth career WoO victory, did some sawing on the steering wheel but managed to keep it out front in leading the final 30 laps.

Sheppard, who started on the second row with Marlar, fell short of his ninth WoO victory of the season when he couldn’t quite get in touch with the winner late in the race.

“I had a really good car there. I think (Marlar) was a little bit better,” Sheppard said. “He could steer across that black (part of the racetrack), I think, a little bit better than I could to pass the lapped cars. I couldn’t scotch up getting into the corner underneath of ‘em like I needed to. All in all, second place is pretty good.”

Moran arrived in the top three with just two laps remaining when he got past Weiss, who led the first 20 laps.

“Ricky, I don’t know how long he led for, but he kind of faded a little bit,” Moran said. “I didn’t even see the white flag. I was just going as hard as I could for as long as I could and we got him right there (at the finish).”

While he started in the third row, Moran wasn’t sure he’d finish in the top 10 early in the feature event.

“Once again we were terrible there at the start of the race. We fell all the way back to 10th or 11th or something, and we had to pass everybody — the only person that fell out in front of us was Rick (Eckert) — so we just worked really hard,” Moran said.

“The track was awesome where you could pull the massive sliders, and that’s what we started doing there. A couple of guys got into my left side and that made me get up onto the wheel even harder — I wasn’t going (to) put up with that, so I just go around ‘em and tried to catch these two up front, but they were pretty checked out.”

The feature was slowed by three cautions, none for serious incidents. The first appeared on lap 10 when Brody Troftgruben slipped over the banking and the second one lap later when Brent Larson went spinning, leaving him with a damaged nosepiece.

The final yellow appeared for Eckert, who started outside the front row and was running fifth when he slowed to draw a lap-29 yellow.

Notes: Marlar got another victory in a red Simpson firesuit he bought during Memorial Day weekend's Show-Me 100 weekend at Lucas Oil Speedway in Wheatland, Mo. It’s not a popular color but it’s working for Marlar, whose older firesuits didn’t fit after he lost weight. “I said I need a good deal on a firesuit, (the vendor) said ‘I’ve got this red one nobody wants.’ I said I’m going to run that baby. We made national TV our first night with it, so it’s all good.” … Ten cars finished on the lead lap. …WoO rookie points leader David Breazeale of Four Corners, Miss., had transmission woes just before the green flag appeared, forcing him to the pits after pace laps. He recovered to finish eighth. … With his 11.975-second lap, Mike Marlar was the only qualifier to crack the 12-second mark. … Hometown driver Dustin Strand, who finished sixth in the WoO feature, won the WISSOTA modified feature. … The River Cities event marked the 20th tour event in North Dakota.