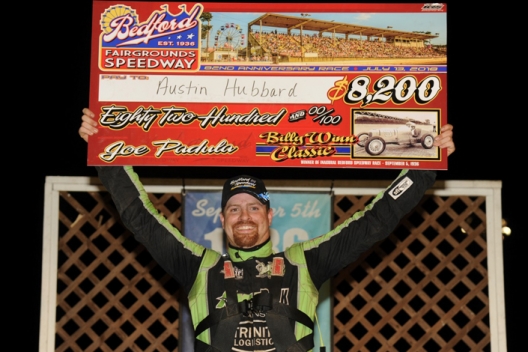 BEDFORD, Pa. — Austin Hubbard leaned on the rear spoiler of his black and green No. 11 Rocket Chassis and emitted relief as he recollected all those nights soiled by misfortune. The former World of Outlaws Rookie of the Year entered Friday night’s 50-lap, $8,200-to-win Billy Winn Classic at Bedford Speedway mired in one of the worst stretches of his 11-year Super Late Model racing career, carrying an average finish of 15.4 with just two top 10s through 12 races.

“We’ve just had some s--- luck. That’s just part of it,” Hubbard said in a postrace interview with DirtonDirt.com, but this wasn’t another dispirited conversation.

The Seaford, Del., native re-adjusted his black, Bedford Speedway feature-winning embroidered hat as he savored a moment in which the dominoes finally tipped in his favor. Hubbard, who ran steadily in second for most of the night, took the lead for good with five laps left when leader Alex Ferree cut a right-rear tire to power to his first win of 2018.

“I’ve been on the other side more times than this side before. It’s definitely enjoyable,” Hubbard said. “Sucks for (Alex), though. You got to take the good with the bad. I can’t ever remember a time where the luck fell into my hand like that … $8,200 is awesome to win. I kind of lucked into it, because Alex was really good.

“But it wasn’t handed to us by any means. I say we were the best car here tonight from the beginning, I felt like.”

The race was all but over when Ferree, who led the first 45 laps, maintained a 2.2-second lead over Hubbard with six laps left. At Lap 39 — after Kyle Hardy halted a 23-lap green-flag run when he came to a stop in turn four — Ferree’s lead had swelled to 5.8 seconds. But it all evaporated in a flash. Andy Fries brought out the caution on lap 44, and during those pace laps, Ferree believes he ran over something that slowly caused his right rear tire to lose air.

He led the field to green on lap 45, but by the time the pack hit the backstretch, Hubbard had blasted past the done-for Ferree, who then brought out the race’s last caution. He wound up finishing 16th, five laps down.

Ferree said he didn’t expect to have any tire issues heading into the 50-lap main event.

“We knew we were going to be hard on them,” Ferree said. “After every caution, I’d run hard for three or four laps. My guys were giving me signals that I was pulling away. I’d put it on cruise control and cruise. Then lap 45, caution comes out. I don’t know if I ran something over (to puncture the right rear tire). There’s actually a hole in the side wall. It’s not completely worn out. I don’t know. It’s just my luck this year.”

Hubbard began his rewarding night by claiming the fast-time award. He started sixth in the feature and fixed an aggressive mentality knowing the track doesn’t take long to rubber up.

“This is a track you have to move early,” said Hubbard, who did just that, working his way to third by lap five and into second on the very next circuit.

He stayed there for the next 39 laps, until Ferree’s tire mishap yielded the top spot. Rine gave Hubbard one last challenge on the final restart with five to go, but the eight-time winner in 2018 had to settle for his 17th top five in 21 races.

“I’m real happy with it,” Rine said. “I wasn’t quite sure which way to go there (on the final restart). I was going to go outside, but I thought my tire was getting pretty bald, and it was. So I’m glad I didn’t (go outside). I love racing with Hubbard. He races me clean. I race him clean. I didn’t want to use him up on that last restart.”

Right behind Rine was Bare, who continued to impress with maturity beyond his years. Friday marked another podium finish for the 24-year-old, also winner of the USA 100 at Virginia Motor Speedway last month and third-place finisher in the Lucas Oil Late Model Dirt Series race at Hagerstown Speedway in April.

“I hope I’m known as a respectable race car driver and get more fans,” Bare said. “I appreciate all the people coming and supporting. I can’t thank Bryan (Klinedinst) enough and my dad, and all the people who support me doing this.”