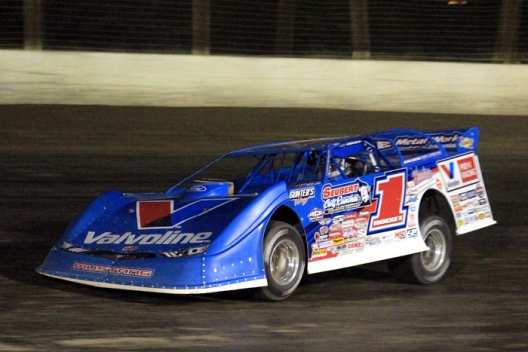 RAPID CITY, S.D. — Rick Eckert’s mastery of Black Hills Speedway is over, thanks to Brandon Sheppard. The 25-year-old driver from New Berlin, Ill., overtook the polesitting Eckert on the 20th lap Tuesday and cruised to his series-leading eighth World of Outlaws Craftsman Late Model Series victory of the season.

Sheppard, whose 32nd career WoO victory was his third in the last four series races, earned $10,000 over a modest 15-car field at the half-mile oval while winning the westernmost race on the national tour’s schedule.

He took the checkers 2.012 seconds ahead of Mike Marlar of Winfield, Tenn., while Chris Madden of Gray Court, S.C., was third ahead of Eckert, winner of his two previous trips to the track near the Mount Rushmore National Memorial.

Marlar’s runner-up finished knotted the series points lead with Madden, and while Sheppard is within striking distance just 34 points behind, he’s focused on grabbing checkered flags for his Rocket Chassis house car team.

“At the end of the day, we just want to stay up front and just be in contention for wins,” Sheppard said in victory lane. “The wins, they come and go, we’ve just gotta take ‘em when we can get ‘em. We had a really phenomenal car tonight.”

“We’re just trying to win races now,” he said. “We’ve had some bad finishes here that’s cost us (and) put us where we are. If we could wipe away three or four (poor finishes), we’d feel a lot better. But it is what it is, so now it’s just get wins.”

Eckert, a 2003 Xtreme DirtCar Series winner and 2012 WoO winner at Black Hills, set fast time and won his heat before drawing the pole position for the feature. He jumped into the lead at the outset trying to stay perfect in his third feature start at Rapid City, but the third-starting Sheppard pressured Eckert from the outset.

An early caution gave Eckert a little relief, but Sheppard turned up the wick again before halfway and made the winning move on lap 20. He built a five-second lead over the field and was never in danger the rest of the way.

“It was a lot of fun to drive … the racetrack ended up being really racy and you could drive all over it,” Sheppard said. “Lapped traffic was tricky there at the end, the track started taking a little bit of rubber, but all in all … hopefully we got the bad luck of four shoulders and maybe we can string together some wins here. I know we’ve got a fast race car. The driver’s gotta get it done, I guess.”

“I’m just glad to get to come race and have fun … we’ll try to do our best everyday. We do that points or not,” said Marlar, who took second from Eckert halfway through the 50-lapper. “We’re having a good time racing and it’s just a lot of fun … literally at Mount Rushmore racing”

“We had to get a new car out and we just can’t seem to find the balance of this thing,” said Madden, who entered the event with a slim two-point leader over Marlar. “We’re really good if the racetrack’s slippery — like later tonight in the race, we were extremely fast — but in between we’re struggling.”

He pledged to “get it back going and get back in this points lead.”

The 50-lapper was slowed by a single caution on the eighth lap for four-time and reigning track champion Eric Mass, who slowed and called it a night.

The series continues a string of events in the upper Midwest on Friday with a trip to River Cities Speedway in Grand Forks, N.D.

Notes: The 15-car field was the smallest since the series drew 17 cars Sept. 24, 2017, at 81 Speedway in Park City, Kan. … South Dakota has few open-competition engine Late Models with most tracks in the region fielding spec-engine cars under rules of the upper Midwest’s WISSOTA Promoters Association. … Dave Smith of Edmonton, Alberta, captured Friday's WISSOTA Wild West Tour race at Black Hills; Smith was the champion of the seven-race miniseries in South Dakota, Wyoming and Montana. ... WoO competitors ran for the seventh time in South Dakota and first since Rick Eckert's 2012 victory at Black Hills.