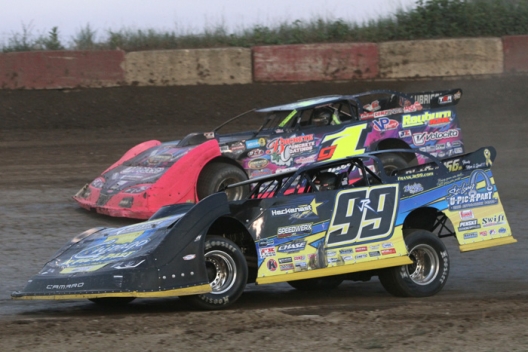 MEDARYVILLE, Ind. (July 10) — Frank Heckenast Jr. of Frankfort, Ill., sure was glad he entered Tuesday night’s DIRTcar Summer Nationals event at Shadyhill Speedway rather than give in to his frustration and step off the grueling month-long series.

Sticking it out, after all, resulted in Heckenast experiencing a dramatic change in luck that landed him a $5,000 victory in the quarter-mile oval’s 40-lap Hell Tour feature.

Racing one day after celebrating his 30th birthday, Heckenast inherited the top spot on lap 16 when series points leader Brian Shirley of Chatham, Ill., tangled with a lapped car and controlled the remainder of the distance in his family-owned Black Diamond machine. He beat Rusty Schlenk of McClure, Ohio, to the finish line by 0.930 of a second to lock down his first Summer Nationals triumph since his only previous series win on June 11, 2015, at Kankakee (Ill.) County Speedway.

“I feel bad for Shirley — that sucks,” Heckenast said of the incident that knocked Shirley from the lead in bitter fashion. “I hate to win like that, but I feel like we’ve had a couple taken away from us on this deal so I guess it all blends together.”

Billy Moyer of Batesville, Ark., finished third, falling short in his bid for a milestone 100th career Summer Nationals win. Polesitter Gordy Gundaker of St. Charles, Mo., placed fourth despite running much of the distance with a broken left-front A-frame on his car and Brandon Thirlby of Traverse City, Mich., overtook Jason Feger of Bloomington, Ill., late in the distance to finish fifth.

Shirley, 37, seemed in control while leading the race’s first 16 laps off the outside pole, but his march toward a third consecutive Summer Nationals checkered flag was derailed — and Heckenast’s flagging Hell Tour fortunes were flipped for the better — due to a scary accident on the 16th circuit. The slowing car driven by Aaron Hubner of Lafayette, Ind., crossed into Shirley’s path in turn three, creating contact that sent Shirley spinning into the tractor tire at the end of the outside wall and Hubner flipping wildly over the concrete.

Shirley’s Bob Cullen-owned XR1 Rocket came to rest backwards against the tractor tire while Hubner, who earlier had spun twice in his heat race and again on lap eight of the feature, landed upside down just off the racing surface. Neither driver was injured and Shirley was able to continue racing, albeit from the rear of the field because he was deemed to have been involved in the tangle that brought out the red flag.

Heckenast had a clear view of the crash that ultimately caused Shirley to settle for an eighth-place finish rather than the first three-race Summer Nationals win streak of his career.

“I was pretty close,” Heckenast said. “At the last second the 4 car (Hubner) turned right to go off the racetrack as Shirley actually was moving up to maybe try to go around him or set the car for the bottom. It was just a really bad deal.”

Shirley’s grim fate certainly was on Heckenast’s mind when he had to deal with slower traffic in the A-main’s closing laps.

“When I got the lead and caught the lapped cars, I was like, ‘OK, we either stay on the bottom and Rusty’s gonna get really close to me,’ or, ‘I’m gonna move out here like Shirley and take a chance (to pass them),’” Heckenast said. “I did (get aggressive), and then I come off the corner and they squeezed me in the wall and I was like, ‘Oh, this is dangerous.’”

Heckenast cooled his jets and stayed several car lengths in front of Schlenk, whose best opportunities to overtake Heckenast actually came early in the race when he drove underneath Heckenast several times in a bid for second place. Repelling Schlenk’s challenges then ended up putting Heckenast in position to capitalize on Shirley’s misfortune.

“I gotta tell him thank you for running me clean,” Heckenast said of Schlenk. “There were a couple times he probably could’ve passed me. I was blocking a little bit at the beginning, but at the end I feel like we got a little better.

“We had a good car,” he continued. “I think if I would’ve started in front of Shirley I could’ve outrun him, but when I was behind him I wasn’t gonna pass him. He was pretty good … I’m just really honored to be able to run with him because he’s been running good.”

Schlenk, who turns 32 on July 20, didn’t have quite enough speed in his C.J. Rayburn house car to outrun Heckenast. The first-time Summer Nationals regular was satisfied, however, with his best outing of the 2018 Hell Tour.

“I wasn’t really excited to see Shirley get in that wreck — that was terrible with that lapped car,” Schlenk said. “But I knew it gave us a shot to maybe win that thing.

“We weren’t better than Shirley, but I think we were maybe a little bit better Frankie on long runs. It just seemed like every time we’d get rolling and get the middle working, I’d start working on Frankie, we’d have a caution.

“I’ll take a second though, especially after last night (at Illinois’s Lincoln Speedway),” he added. “I thought we were gonna win it and blew a motor (while leading). We kind of rallied back and pulled the backup car out tonight and came back for a second.”

For Heckenast, his rebound cemented his decision to stay on the road with the Summer Nationals for its final week.

“I’ve been trying to … I don’t want to say quit, but I was definitely negative about it,” said Heckenast, whose car was powered by an older Matt Rhyne-built engine that his sister, Sherri, used during her driving days. “But my crew guys and my mom and my dad and my fiancé and everybody didn’t want me to quit. The (World of) Outlaws (Craftsman Late Model Series) was tough and I never quit it (while following it full-time from 2014-17). I’m not a quitter, and they didn’t want me to quit with as bad of luck as we were having.

“I actually would’ve been good with bad luck, because we’ve had worse than bad luck. We’ve been really fast. We set fast time three nights in a row. It’s just everyone else’s bad luck would get into ours, or we’d break stuff … we’ve been breaking stuff that I’ve never seen anybody break. It’s not because of my crew guys … I feel terrible for them because we’ve had so many DNFs and its nothing they’ve done. It’s just crazy stuff.

“So,” he concluded, “it feels pretty damn good to finally get some good luck.”

Rusty Schlenk cruised to the checkered flag, maintaining a short edge over Billy Moyer for the entire distance to emerge victorious. Jason Feger chased the top two across the finish line in third.

Gordy Gundaker rolled to a flag-to-flag victory, beating Ausssie Paul Stubber to the finish line by 1.765 seconds. Brandon Thirlby worked past another Australian, Cameron Pearson, for third late in the distance and finished there.

Brian Shirley wrestled the lead from Frank Heckenast Jr. on lap three and went on to defeat his fellow Summer Nationals regular by 0.906 of a second. Caution flags flew on laps five and seven, both for turn-two spins by Aaron Hubner.

Thunderstorms stayed south of Shadyhill Speedway on Tuesday afternoon, leaving the track under partly sunny skies with high temperatures reaching the upper 80s. … The 20-car field, which includes several local Crate Late Models, is two more than the number of entries that were signed in for the quarter-mile oval’s 2016 Summer Nationals event before it was rained out. … Missing from the evening’s action is Shannon Babb of Moweaqua, Ill. Despite finishing second in Monday night’s feature at Lincoln (Ill.) Speedway and sitting 56 points behind Brian Shirley of Chatham, Ill., Babb decided to call off further pursuit of a fifth career Summer Nationals title after a broken engine in his primary car during Lincoln’s qualifying session (he pulled out his backup car to complete the night) continued a stretch of awful luck that allowed Shirley to overtake him in the points standings. … Babb’s departure from the Hell Tour takes an immense amount of pressure off Shirley, whose closest remaining pursuer in the standings, Jason Feger of Bloomington, Ill., is 221 points behind with just five points races remaining. … Billy Moyer of Batesville, Ark., is back on the series after skipping the last two nights of competition. He plans to run the final week of the Summer Nationals, which concludes with the two-day Birthday Race program at Oakshade Raceway in Wauseon, Ohio, for the first time since he won the last of his Summer Nationals crowns in 2003. … After losing a motor while leading Lincoln’s feature on Monday, Rusty Schlenk of McClure, Ohio, will run his other C.J. Rayburn machine this evening. He replaced the broken powerplant in the car he drove at Lincoln but has some other work to do on it before returning it to the track later this week. … Eric Spangler of Lake City, Mich., had planned to enter Shadyhill’s program, but he posted on Facebook Tuesday morning that a family emergency will prevent him from competing. He is uncertain about his status for Wednesday’s show at Thunderbird Speedway in Muskegon, Mich., as well. … Trevor Gundaker of St. Charles, Mo., the teenage brother of Summer Nationals regular Gordy Gundaker, will enter his Crate Late Model in Summer Nationals action for the second time in the last three nights due to the low car count. He steered his Crate to a ninth-place finish in Sunday’s A-main at Quincy (Ill.) Raceway.

The DIRTcar Summer Nationals heads east for the start of a series-ending five-race swing at Shadyhill Speedway, a track that is unfamiliar to the Hell Tour regulars.

UMP modifieds headline the weekly programs at the quarter-mile oval, which rarely hosts Dirt Late Model events. In fact, Tuesday’s show will mark just the second Summernationals race at Shadyhill; the first, on July 4, 2000, was won by Bob Pierce, the father of three-time Summer Nationals champion Bobby Pierce. A Summer Nationals program was scheduled at Shadyhill in 2016 but thunderstorms washed it out before cars were able to hit the track.

DirtonDirt.com records indicate that UMP DIRTcar sanctioned two series events at Shadyhill in the ‘90s, both part of the UMP Outlaw Nationals that ran from 1995-98. Dan Sturgeon of Bedford, Ind., was victorious in the 1997 feature and Kevin Weaver of Gibson City, Ill., won the ’98 race.

Tuesday night’s Round 20 of the Summer Nationals will likely include group qualifying, heats and a last-chance race leading into a 40-lap feature paying $5,000 to win. Hot laps are scheduled to begin at 6 p.m. EDT.