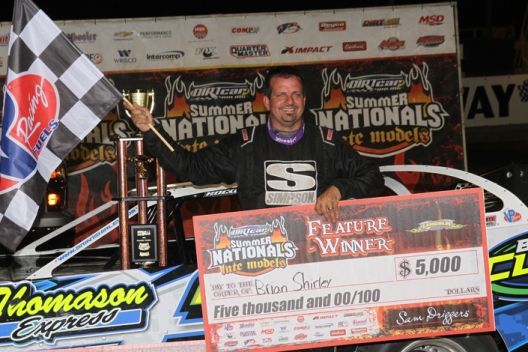 LINCOLN, Ill. — It helps to be in the right place at the right time. That’s exactly where Brian Shirley was as the laps wound down in Monday’s DIRTcar Summer Nationals race at Lincoln Speedway. Shirley, running second behind Rusty Schlenk of McClure, Ohio, was in perfect position when Schlenk suddenly slowed because of engine failure with only 13 laps remaining.

Schlenk, who led the race from the onset, coasted off the track on lap 27, leaving Shirley, of Chatham, Ill., in the catbird seat. Shirley raced unchallenged the rest of the way, beating Shannon Babb of Moweaqua, Ill, to the finish by a full straightaway for his second straight Summer Nationals victory and 19th of his career. He earned $5,000 for his effort. Jason Feger of Bloomington, Ill., finished third, while Frank Heckenast Jr. of Frankfort, Ill., and Brian Diveley of Springfield, Ill., completed the top five. Myles Moos, the last driver on the lead lap, finished sixth at his home track.

“It’s the dedication of a lot of hard work from my guys,” said Shirley of his fourth Summer Nationals win of the season. “Big R, Randall, Wade, Larry, Boss Dog, they have literally put in the time and effort … and not that nobody else doesn’t, because everybody out here puts in the time and effort. But it also goes back to Bob and Lisa Cullen for the equipment that they give me. They give me second-to-none equipment, the best equipment that money can buy. All-in-all, I’m just lucky to be the guy who gets behind the wheel.”

Shirley started fifth, but quickly moved into second on the opening lap when front row starters Schlenk and Feger got together ever so slightly in turn two. Schlenk got a run on the outside, hooking Feger’s right rear quarterpanel as he rolled around the top. Feger was turned sideways briefly and it was Shirley who zipped to the bottom and came out of the cluster in second place.

“That was crazy,” said Shirley. “That’s just how racing is. You’ve got to capitalize on mistakes, other people’s mistakes and capitalize on the bad days to make them better. Tonight was just one of those nights where we capitalized on it. The car was good and we were lucky enough to get the win.”

Shirley had to battle Babb for the second spot while Schlenk set the pace early. Babb, who started eighth in his backup car after breaking an engine in qualifying, passed Shirley for the position on lap 10. Ten laps later, Shirley was back beside Babb. He reclaimed the runner-up spot on lap 22 and began to stalk Schlenk.

“We had a (Hoosier) 30 (compound tire) on the right rear, so it took a minute to get going, so I knew I had to run the top,” said Shirley. “Even when Babb got by me, I didn’t get nervous because he had a 20 on. Once I got my tire heated up, I felt like our car was good enough to win. I’m not saying we would have won because obviously Schlenk was leading, but we were fortunate enough to capitalize on his (misfortune) and was able to bring it home.”

After inheriting the lead, Shirley continued to ease away from Babb, who said his tire choice likely kept him from making a late charge.

“For the way the night started out, we were lucky to get to second,” said Babb. “The track was racey tonight. It was a heavy one again tonight and we was able to get up to second. I don’t know what everyone else had on for tires, but I went soft and I think I tapped out pretty early there.

“Lapped traffic just plays a role in all the races and I just wasn’t able to get around (a slower car) and it killed my momentum so Shirley was able to get by me. Schlenk was doing a good job. He obviously fell out, but for us to have passed him, he’d had to jump the cushion or do something.”

Notes: Eleven of the 16 starters finished the race. Four were one lap down and one was two laps off the pace. … Shirley finished 1.924 seconds ahead of Babb. … Babb said having to drag out his backup car just before the heat put him behind. “I was way too tight honestly. We didn’t have a lot of time to think about it and work on our car tonight. We just kinda threw some stuff at it and went,” he said. … Ryan Unzicker of El Paso, Ill., had his night come to a end while running third on lap eight. He slowed after his car let out a plume of smoke. Unzicker pulled to the infield and had his crew look things over and then pulled to the outside pit area under his car’s own power. … Paul Stubber’s night ended when he got into the fence and bent a J-bar on lap five. The West Bunbury, Australia native also broke a driveshaft in qualifying. His crew said they didn’t really need the extra work considering they had already planned to make an engine swap before Tuesday’s race at Shadyhill Speedway in Medaryville, Ind. … Chuck Hummer of Lyons, Ohio, scratched from Monday’s program with engine woes and Phil Taylor of Illiopolis, Ill., scratched before the feature with suspension issues. … Monday’s race was the final points event for the Summer Nationals in the Land of Lincoln. The tour heads to Shadyhill on Tuesday and then turns north for two races in Michigan. The series wraps up July 13-14 with a pair of races at Oakshade Raceway in Wauseon, Ohio. … Jacksonville (Ill.) Speedway hosts its Summer Nationals makeup race Aug. 12. It will be a non-points race.

A gorgeous, but hot afternoon — temps were in the low 90s — welcomed drivers to Lincoln Speedway. Skies are clear as the DIRTcar Summer Nationals compete for the seventh consecutive night. … Shannon Babb had to go to a backup car after apparent engine trouble as he completed his first qualifying lap. Babb finished fourth in his heat and will start eighth in the 40-lap main event. … Paul Stubber pulled off the track  on his opening qualifying lap as well and then scratched from the heat with a broken drive shaft. Stubber made repairs and is ready for the feature. … Chuck Hummer scratched from the evening’s program when he found a hole in his engine. … Rusty Schlenk starts from the front row for the second night in a row. Schlenk is seeking his first Summer Nationals win since 2010. … Feature polesitter Jason Feger is seeking his third tour win at Lincoln Speedway. Feger won here in 2010 and ’12. … The first feature of the night, B-mods, were in the chute to hit the track at 7:55 p.m.

Polesitter Rusty Schlenk of McClure, Ohio, led flag-to-flag to win the second heat and earn a front-row starting position for the feature for the second night in a row. Schlenk beat Myles Moos into turn one on the first lap and  pulled away. Moos finished second, while Brian Diveley finished third. Shannon Babb finished fourth after starting on the tail of the heat after having engine trouble during his lone qualifying lap. Babb pulled out his backup car and quickly readied for the heat.

Jason Feger of Bloomington, Ill., pulled ahead of polesitter Frank Heckenast Jr. to lead the first lap and never looked back. Feger paced all 10 laps as the field strung out around the 1/4-mile oval. Heckenast finished second, with Brian Shirley third.

Frank Heckenast Jr. of Frankfort, Ill., turned the quickest lap among the 17 cars that made the call for qualifying. Heckenast’s time of 13.163 seconds was fastest in the first group, putting him on the pole for the first heat. Rusty Schlenk of McClure, Ohio, was fastest in the second group at 13.207 seconds.

Lincoln Speedway hosts Monday's 19th round of the DIRTcar Summer Nationals with a $5,000-to-win purse on the line at the 1/4-mile oval. Along with Super Late Model hot laps and qualifying, there will be three heat races and a 40-lap main event. The race was originally set for July 1, but was one of five rainout during the first half of the month-long series.

Brian Shirley of Chatham, Ill., leads the tour to Lincoln. Shirley hasn’t relinquished the tour points lead since he took over the top spot from Shannon Babb of Moweaqua, Ill., following his July 4 victory at Fayette County Speedway in Brownstown, Ill. Babb, who has struggled with mechanical issues through the majority of the tour’s July schedule, is second in points, 51 markers back. Jason Feger, of Bloomington, Ill., is a distant third.

As the series heads into its final week, the grind is getting tougher. Gordy Gundaker of St. Charles, Mo., originally announced that he is dropping from the tour following engine trouble Sunday at Quincy (Ill.) Raceway, but has decided to enter Monday’s race in his brother Trevor’s Crate Late Model. Gundaker broke a fan which in turn hurt his powerplant, the second engine Gundaker has hurt since winning the Herald & Review 100 at Macon (Ill.) Speedway on July 5. He was fourth in the standings.