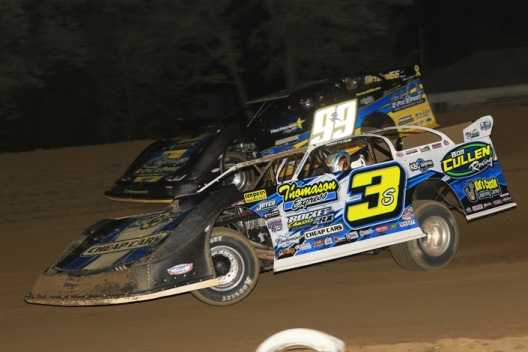 QUINCY, Ill. — Brian Shirley survived. Again. This time is wasn’t necessarily a challenge from an opponent though. It was a challenging track. Faced with a rugged surface at Quincy Raceway, Shirley got up on the wheel and outdrove his competitors while his car outlasted them.

Starting fourth, Shirley, of Chatham, Ill., took the lead from Frank Heckenast Jr. of Frankfurt, Ill., on lap 22 and went on to win his third DIRTcar Summer Nationals victory of the season and 18th of his career.

Steven Roberts of Jesup Ga., started sixth and ran in the top five throughout the 40-lapper before advancing to second in the waning laps for a career-best Summer Nationals finish. Polesitter Rusty Schlenk of McLure, Ohio, finished third, while Jason Feger of Bloomington, Ill., and Brian Diveley of Springfield, Ill., completed the top five.

Shirley and Heckenast raced side-by-side for the lead on laps 20 and 21 before Shirley finally grabbed the point just before a caution came out. After than, his toughest battle was with the track itself.

“It was just one of those deals where I just kept my head down and tried to find the smoothest line out there,” said Shirley. “I’m just glad to get out of here with the car in one piece and win the race. I just knew where them guys where running so I figured I’d just have to use a couple laps to figure out where I could get low to come off the corner the best, you know, without obviously getting the car upset of hitting a bunch of holes.

“I was lucky I found a couple decent lines. I figured out how to get into (turn) three there where the biggest hole was and once I figured that out, she’s just diggin’ like Dale son.”

Heckenast led the first 21 laps after starting from the outside of the front row. He took the lead from polesitter Rusty Schlenk on the opening lap and pulled out to a healthy advantage over second-running Shannon Babb. But once Shirley got around Babb on lap 15, he began to reel in the leader.

A caution on lap 18 bunched the field, giving Shirley a closer look at the front. He still had to be patient at he stalked Heckenast before finally getting an opportunity to pull alongside

“You can upset the car, get on two wheels,” said Shirley. “There’s so many things that can slow you down a half second, so the most part when we’d hit the corner right, there was nobody gonna keep up with us. It was just a couple of times we’d push and we’d drive through it and our Durham motor kept us out front and that’s all we needed.

“Frankie’s stuff was good tonight. He did a good job. I’m just happy that our stuff held together. We’ll take it for what it is. It’s a win tonight and tomorrow is a new night.”

As attrition began to take its toll — only eight of the 22 starters finished the race — Roberts, Schlenk and Jason Feger were never far from the front. The trio battled inside the top five — Schlenk fell back to sixth once — for most of the race. Roberts said it was a matter of knowing the terrain.

A caution on lap 39 set up a two-lap dash to the finish. Roberts, hoping for his first career Summer Nationals victory, wasn’t able to make a run at Shirley.

“I went in there and revved (my engine) up at him a little bit, hoping I could maybe get in his head a little, hoping he might would mess up,” said Roberts. “I pushed getting into (turn) one down there and wasn’t able to hang with him. And he did hit that hole there in (turn) three. I wish I could’ve got off turns one and two better and been there at least to make it close at the finish line.”

Schlenk said that after missing his cars setup ever so slightly, he just decided to take it easy during the first half of the race.

“I was just way too tight early,” said Schlenk. “If I’d drove hard there the first half of that race, I’d ended up flipping in that hole getting into (turn) one. I bicycled there in the first laps so I just backed off. I figured people were gonna break. The track ended up pretty racy though. It was two or three lanes of racing. You just had to pick your way through it. It was alright. I hate to see the bad luck happen for everybody. At least it wasn’t me having it tonight, but I hate it for everybody else.”

Notes: Of the eight cars still running at the finish, seven completed all 40 laps. … Steven Roberts finished 0.584 seconds behind Brian Shirley. … Shirley’s win secured for him a $2,000 bonus for winning the tour’s fourth week mini points chase, which was sponsored by FK Rod Ends. … Trevor Gundaker of St. Charles, Mo., made his first career Summer Nationals start and finished ninth, one lap off the pace. Gundaker was still on the track at the end of the race, but was scored behind Frank Heckenast Jr., who pulled off on the final lap. … Heckenast gave up a top-five spot when he pulled of on lap 39. The bolts connecting his right drive flange pulled out of the hub. … Shannon Babb saw a top-three run disappear when a broken right rear axle caused him to slip to seventh in the last five laps. … Gordy Gundaker stopped on lap 18 due to a broken fan blade. The entire fan then became unbalanced, broke and fell into Gundaker’s radiator. … Derek Fetter, a late arrival who tagged the rear of the field, broke a U-joint on his driveshaft with three laps remaining. He finished 10th. … Local standout Mark Burgtorf’s night ended on lap 11 when his car began billowing smoke. … Three cars took the green flag and pulled off before completing a lap. Rickey Frankel, Denny Woodworth and Melvin Linder hit the back straightaway exit on the opening circuit.

Action at Quincy got a late start as track officials worked to iron-out a soggy track, delaying the start about an hour. Once they got started, things moved along swiftly. All heats were wrapped up by 9:15 p.m. … A handful of Crate Late Models are competing with the DIRTcar Summer Nationals on Sunday. … Trevor Gundaker, brother of Gordy Gundaker, unloaded his Crate Late Model as well. He qualified fifth in his group and finished fifth in his heat. … Derek Fetter of Troy, Mo., was a late arrival. Fetter pulled through the pits just as the heats were wrapping up and will start his No. 32 from the 22nd position. … With exactly 22 cars on hand now, there was no consolation race. … Rusty Schlenk drew the pole for the 40-lap main event. The McClure, Ohio, driver is seeking his third career Summer Nationals victory and first since 2010, when he won two of the tour’s final three races. … Frank Heckenast Jr. starts second and Shannon Babb, looking for his fourth career series win at Quincy, will start third. … The first feature hit the track at 9:37 p.m.

Blasting into the lead from the pole on the first lap, Rusty Schlenk ion McClure, Ohio, rolled to a win in the final heat. Steven Roberts nipped local standout Mark Burgtorf on the final lap to finish second. Burgtorf was third, with Brian Diveley, holding off Trevor Gundaker for fourth.

Polesitter Shannon Babb of Moweaqua, Ill., slid in front of Jason Feger as they raced off of turn two and drove to victory in the caution-free second heat. Feger finished second, with Jay Johnson third. Mark Voigt finished fourth, the last car running at the finish.

Grabbing the lead on the opening lap with a power move into turn one, Frank Heckenast Jr. of Frankfurt, Ill., led every lap of the first heat. Heckenast pulled away from Brian Shirley to win by three car lengths. Gordy Gundaker tried the bottom a couple times but couldn’t get by Shirley. He eventually fell a half straight behind the runner-up as he settled for third.

One of only three drivers in the 12-second range, Frank Heckenast Jr. of Frankfurt, Ill., turned the overall quick time among 21 cars. Heckenast went out in the first group, turned a 12.912-second lap and will start from the pole of the first heat, with series points leader Brian Shirley to his outside. Shirley turned a 13.041.

Rusty Schlenk of McClure, Ohio, earned the pole for the third heat with a lap of 13.115 seconds. Georgian Steven Roberts turned a lap of 13.336 seconds and will start alongside Schlenk in the final heat.

Quincy Raceway hosts Sunday's 18th round of the DIRTcar Summer Nationals with a $5,000-to-win purse on the line at the 1/4-mile oval. Along with Super Late Model hot laps and qualifying, there will be three heat races and a 40-lap main event.

It’s also the final day of the fourth weekly points chase. Shirley leads the FK Rod Ends weekly points with 319 points. Gordy Gundaker (303) and Jason Feger (299) follow Shirley in the weekly standings for week No. 4, which comes to a close at Quincy. Each weekly point champion earns $2,000 from a $5,000 point fund.