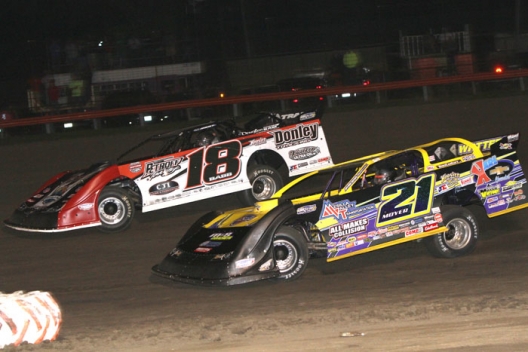 FARMER CITY, Ill. — The hot streak that Shannon Babb used to kick off this year’s DIRTcar Summer Nationals has cooled about as quickly as the Illnois weather. After winning three of the first four races and five of the tour’s first nine, the Moweaqua, Ill., driver has been on an equally paltry streak over the course of the last five races.

Friday that icy patch continued at Farmer City Raceway, where it was Hall of Famer Billy Moyer who took advantage of Babb’s latest tough break to win his series-leading 99th career Summer Nationals main event. Moyer, of Batesville, Ark., inherited the lead when Babb slowed with a flat right rear tire during a lap 34 caution. Moyer then led the final six laps, pulling away from Brian Shirley of Chatham, Ill., for a $10,000 triumph.

Jason Feger of Bloomington, Ill., finished third, while Kent Robinson of Bloomington, Ind., was fourth. Tim Manville of Highland, Ill., completed the top five, while Babb rallied back from 13th to six over the final few circuits.

Moyer’s victory comes after the 60-year-old driver spent the last seven days away the tour. Moyer headed back to his shop in Arkansas following a grinding crash at LaSalle (Ill.) Speedway on June 30. He returned to the circuit fresh, which often spells trouble for his competitors.

“Its what it’s all about is you can’t give up. It’s just so nice to be able to get back home,” said Moyer. “You know we was gone from before the Dream (on June 9 at Eldora Speedway). I used (C.J.) Rayburn’s shop (in Whiteland, Ind.). We wasn’t really out in the parking lot, but it’s not the same as being … it’s just hard to explain. When you can be at your own place and get in your own bed, and even shower, it makes a big difference. Just to go home and get rejuvenated a little bit.”

Apparently a rejuvenated Moyer is a fast Moyer. Starting third after winning his heat, Moyer battled series standouts Babb and Shirley early in the 40-lap feature before finally settling in and taking the lead from Babb with an outside pass on lap six. Babb stayed in Moyer’s tracks for the next 18 laps before sliding to the bottom of the track, where he repeatedly worked the low line until he was able slip in front of Moyer to take the lead on lap 27.

He stayed there until a caution for Frank Heckenast Jr. slowed the pace on lap 34. During the caution Babb knew he had a problem. He finally slowed on the front stretch and made the hard left turn into the infield work area, handing the lead to Moyer.

With Babb out of the picture — or at least way back in 13th place — Moyer easily held off Shirley, winning his third Summer Nationals race of the season by 2.016 seconds.

“We hit pretty good on the setup all night long, in the heat race and in the main,” said Moyer. “I was a little bit skeptical if they done the right thing to the track or not when they went out there (and reworked it before the feature). We’re all ready to race and then they kinda gave us a different race track to race on, but it was the same for everybody. Probably a good thing I didn’t do anything to (the car). I’d probably messed something up on the car if I’d been able to mess with something, so we left it alone how it was. The track kinda come back around the way it was anyway. So it all worked out good.”

Moyer wasn’t certain he would’ve been able to reclaim the lead from Babb.

“We hit everything pretty darned good and he got there and got by me,” said Moyer. “I was gonna have to get my elbows up and get back after it. It would’ve been tough. I don’t know. I’m just happy some things went our way. We run good. It ain’t like we got it give to us. We earned it.”

Shirley, who used his runner-up finish to pad his Summer Nationals points lead, agreed with Moyer in that the track was pretty decent for the feature, even though it wasn’t exactly what he planned for.

“The track was a little choppy tonight,” Shirley said. “I really thought it would stay more choppy and actually when they went out there and worked it a little bit it actually made the race track better. We was a little off on the setup tonight, but thankfully that late restart there we was able to dig hard and get the best we could (by) coming up and getting second.

“I honestly set up for it to be a little more choppy and I was just a little looser than I wanted to be out there. But all in all, we fought hard and we was gonna get whatever finish we could get and go on to tomorrow.”

Jose Parga led flag to flag to win the consolation race. Billy Drake finished second, with Freddie Carpenter grabbing the third and final transfer spot on a late race restart. David Jaeger spun in turn one to bring out a caution. Chuck Hummer was involved in a hard crash in turn four that left his No. 25 heavily damaged.

As the sun set at Farmer City, fans in packed grandstands were greeted by a nice breeze and Fall-like temperatures. At 9 p.m. it had already dropped to 71 degrees, with temps expected to dip into the low 60s before the program is over, a stark contrast to what competitors dealt with earlier in the week. … A day after winning at Macon (Ill.) Speedway, Gordy Gundaker of St. Charles, Mo., was bitten by bad luck in the form of motor trouble. Gundaker had engine problems just has he prepared to qualify. Without a spare, Gundaker plans to start the main event in his brother Trevor’s car in order to salvage as many points as he can. Gundaker expects to have a new powerplant on Saturday. … Allen Weisser was a late entry. The Peoria, Ill., native who finished third at Clarksville on Tuesday arrived in time for qualifying and raced his way into the main event via a fifth-place finish in the third heat.

Polesitter Shannon Babb of Moweaqua, Ill., beat Kent Robinson into turn one and pulled away to lead to first two laps easily. Robinson got a reprieve in the form of a caution, however and challenged Babb for two laps following the restart before Babb pulled away to lead by two seconds. Another yellow, the third of the race, set up a two-lap shootout. Babb held on to beat Robinson, while Tim Manville nipped Mike Mataragas for third. Allen Weisser finished fifth. Billy Hough brought out a caution from a spin on the opening lap and yellow waved on lap two for Cameron Pearson, who flew off the track on the back straightaway while running fifth.

Outside front row starter Brian Shirley took command of the second heat on the opening lap and rolled to victory. Shirley pulled away from the second-place battle between Mike Spatola and Kevin Weaver and won by a straightaway. Spatola, finished second, with Weaver third. Frank Heckenast Jr. and Billy Drake completed the top five.

Billy Moyer of Batesville, Ark., needed a lap to get up to steam, but once he got by polesitter Ryan Unzicker on the second circuit he set sail. Moyer, back on the tour for the first time since June 30, topped Unzicker and Jason Feger. Paul Stubber and Taylor Scheffler grabbed the last two transfer spots. A solo spin by David Jaeger on the opening lap brought out a yellow.

Shannon Babb turned the fastest lap among the 30 entrants, going out early in the third and final group. Babb’s lap of 12.501 seconds barely nipped the 12.516 mark that Mike Spatola of Manhattan, Ill., posted in the second group. Ryan Unzicker of El Paso, Ill., stopping the clock at 12.739 seconds, was the fastest in the first group.

Unzicker will start from the pole position of the first heat alongside Billy Moyer. Spatola is the second heat polesitter. He’ll have series points leader Brian Shirley to his right. And Babb will roll from the pole of the third heat with Kent Robinson joining him on the front row.

Five drivers from each of the three heats will advance to the 40-lap feature.

While Brian Shirley of Chatham, Ill., and Shannon Babb of Moweaqua, Ill., have been the class of the tour, turning the title chase into their own two-man race, they haven’t escaped without their share of trouble.

Babb has has three straight nights of bad luck, starting with a broken wheel at Clarksville (Tenn.) Speedway on Tuesday. He then got caught up in a crash while racing for the lead Wednesday at Fayette County before mechanical trouble knocked him out of the top at Macon on Thursday. Shirley, who won at Fayette County to grab the tour lead, was leading at Macon when he suffered a broken axle with just six laps remaining.

Hall of Famer Billy Moyer of Batesville, Ark., is back with the tour Friday as well. Moyer, who has 98 career Summer Nationals victories, picks up his battle with Babb, who has 97 series victories, to see who can get to the century mark first.