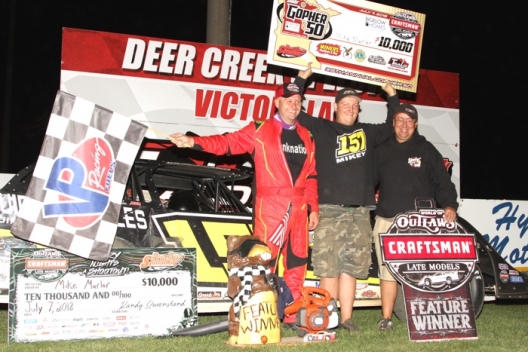 The 40-year-old driver from Winfield, Tenn., righted his ship on Saturday evening, rolling to a $10,000 triumph in the 39th annual Bigelow Homes Gopher 50 at Deer Creek Speedway.

After grabbing the lead from race-long pacesetter Shane Clanton of Zebulon, Ga., on lap 30 and marching away to his third World of Outlaws Craftsman Late Model Series win of 2018, Marlar made it clear that he didn’t allow himself to dwell on his defeat the previous night at Dubuque (Iowa) Speedway where a flat right-rear tire knocked him from the lead with just five laps remaining.

“Last night, we was pretty bummed out,” said Marlar, who appeared headed to victory at Dubuque before suffering misfortune. “That was kind of a bad deal, leading that race and having that flat pretty much at the end of it. But anything bad that’s ever happened to me, it’s always followed by something even better.”

Marlar lived his philosophy at Deer Creek, a 3/8-mile oval that he had visited just once previously — for last year’s Gopher 50 in which he finished third. He was virtually flawless in his second career start at the Queensland family’s track, dominating the action in his Ronnie Delk-owned XR1 Rocket after assuming command to beat Clanton’s Ron Davies-owned Capital machine to the finish line by a healthy margin of 3.116 seconds.

Tyler Erb of New Waverly, Texas, briefly snatched second place from Clanton late in the distance before settling for a third-place finish in his XR1 Rocket that matched his season-best outing on the WoO circuit. Defending series champion Brandon Sheppard of New Berlin, Ill., finished fourth in the Rocket Chassis house car after ceding the last podium position to Erb on lap 38 and Devin Moran of Dresden, Ohio, advanced from the 13th starting spot complete the top five in Tye Twarog’s XR1 Rocket.

Marlar’s only real anxious moment during the race’s closing stages was when he had to deal with some especially tough slower traffic. His gap back to Clanton, however, never dwindled enough to truly put him in jeopardy.

“There at the end I was way too tight and I couldn’t get by a few of the guys in the back there, some of the lapped cars, and I thought, This may not be good for my health here,” said Marlar, who started on the outside pole alongside Clanton. “But I guess I held ‘em off.”

For Marlar, the victory was a memorable one. He’s a big fan of the well-managed, spic-and-span Deer Creek facility.

“I said earlier today before the race, ‘You all have a special, special racetrack here,’” Marlar said, praising the track. “A lot of electricity, awesome fans. I don’t think I’ve ever seen so many fans come in the pits at 3 o’clock.

The score was also significant to Marlar’s chase of the $100,000 WoO title. It moved him within two points of leader Chris Madden of Gray Court, S.C., who finished seventh after capturing last year’s Gopher 50.

Marlar refused to get caught up in points-race talk midway through the summer, though.

“I was so bummed out after last night, we got up this morning and we all made a decision — we ain’t points racing from here on out,” Marlar said. “We come here to race and do the best we can do. If we win the points, that’s great, and if we don’t, we’ll hug the guy that does.”

Clanton, 42, simply couldn’t match Marlar’s speed down the stretch after leading the race’s first 29 laps. He had to be satisfied with his fourth runner-up finish of 2018 on the WoO tour.

“We had a good car tonight, we just made a wrong adjustment there,” said Clanton, who is still searching for his first WoO win of the season. “We were a little too tight later in the run. Excellent car the first 25 laps, couldn’t ask for a better one, but …”

The 21-year-old Erb continued his summer surge on the WoO trail, tallying his second consecutive top-five finish and third in the last five series A-mains.

“Our car was really, really good,” said Erb, who remains winless in WoO competition since become a regular in 2016. “I didn’t win that heat and that kind of put us back one more row (to the fourth starting spot), but it worked out.

“I wish we could’ve had a caution in there (during the race’s second half), but another solid run. If we keep knocking off top-fives, top-threes, I think it’ll come (a win) pretty soon.”

Notes: Marlar recorded his fifth career WoO win. … Former Gopher 50 winner Brian Birkhofer of Muscatine, Iowa, drove a Jason Rauen-owned car for the second consecutive night, finishing ninth after starting 14th. The semi-retired racer made his first start in nearly a year the previous night at Dubuque. … Seventh-starter Jimmy Mars of Menomonie, Wis., climbed as high as fourth early in the A-main but faded to eighth in the final rundown. … Chris Simpson of Oxford, Iowa, started third and briefly appeared in second place while trading sliders with Marlar during the race’s flurry of caution flags, but he slipped to a sixth-place finish. … The Gopher 50 was sanctioned by the WoO for the 14th consecutive year.