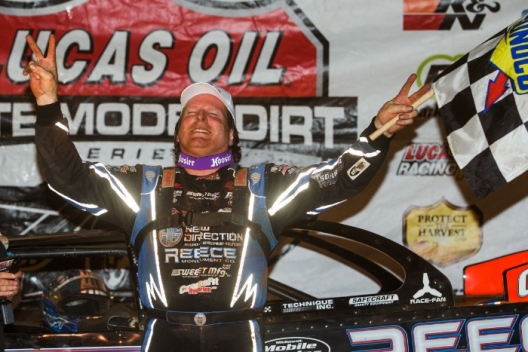 Starting inside the fourth row, Bloomquist rolled around the top side of the racetrack, charging past Hudson O’Neal of Martinsville, Ind., to take second in the early running. Closing the gap between himself and the race leader as the pair worked their way through lapped traffic, Bloomquist slipped under Richards in turns three and four to take the lead with 20 laps remaining, scoring his fifth Lucas Oil Series victory of the season.

“That’s the raciest this place has ever been,” Bloomquist said in victory lane. “Whatever they’re doing to this racetrack is awesome. I used to dread coming here. … We fired good. We come out with a good start, just hung in tow, kind of watched where they were running. I got in traffic there and just felt like we were a little bit better. I thought if we got in the lead, we’d be alright.

“We were moving around a lot, from real low in (turns) one and two to the very top. Then at the end it seemed like we got a little bit better running way up high. I could kind of gage off of lapped cars. In (turns) three and four, it just seemed like the top was the better place to be. But either way, the car was good anywhere we put it.”

“I didn’t have nothing to race with him when I got up there,” Overton said. “Both back tires, if you just look at them, I killed the right-rear. I thought that rain was going to come. I was going to try to get up there as fast as I could. But I gave it my all.

“I’ve really got to thank (car owner) Billy Franklin. People in this sport, they tell you stuff. Tell you, ‘We’re going to do this, we’re going to do that,’ and they don’t ever come through. Everything this guy’s told me, he’s done it. If it wasn’t for him, I wouldn’t be out here this weekend.”

Starting on the pole, Richards shot to the front of the field on the second circuit, overtaking Hudson O'Neal. Falling to Bloomquist mid-race, he was unable to hold off a charging Overton on a late-race restart, finishing third at the checkered flag.

“We’ll take it,” Richards said. “We had a really good car. We had a fast car all night. Whenever we were out in the front there, Scott (Bloomquist) got us. And then in that dirty air I could run right with him. But that last restart, I was like, ‘Should I pick the top?’ Brandon (Overton) did a great job and rolled the top there and we just had to settle for third.”

Friday’s victory marked Bloomquist’s 91st on the Lucas Oil Series. As the tour heads to Smoky Mountain Speedway in Maryville, Tenn., on Saturday night, the Hall of Famer will be aiming for his 600th career victory.

“I didn’t think about that,” Bloomquist said. “I wasn’t sure we didn’t get that tonight. Maybe we can get that tomorrow night. That’d be great, in front of our home fans. We’ve got just as many boo-ers there as we do here. But they come out and watch it, so that’s all that matters.”

Notes: Bloomquist notched his fourth Lucas Oil victory at Cherokee with the previous wins coming in 2006, '10 and '16. ... Series points leader Jonathan Davenport slowed for a lap-37 caution and ended up 14th. ... Overton made his first series start in a Billy Franklin-owned No. 76 Rocket Chassis.