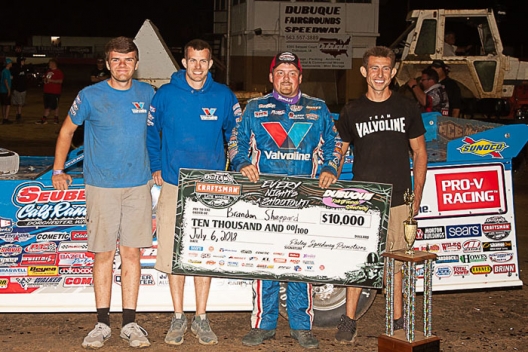 DUBUQUE, Iowa (July 6) — With a dose of good fortune to go along with a superb display of driving, Brandon Sheppard of New Berlin, Ill., pulled off a come-from-behind victory in Friday night’s 40-lap World of Outlaws Craftsman Late Model Series feature at Dubuque Speedway.

Sheppard’s hopes for the $10,000 first-place prize took a hit on lap nine when a right-rear flat tire forced him to pit during a caution period while holding third place — and, of course, he realized it.

“It definitely didn’t help,” Sheppard said of the flat that put him to the rear of the field. “I didn’t want to have to work that hard (to rally), you know what I mean?”

But the 25-year-old star was up to the challenge. He climbed up to third place one circuit after a lap-30 restart, moved to second on lap 35 when race-long pacesetter Mike Marlar of Winfield, Tenn., slowed with a flat right-rear tire and nipped Chris Simpson of Oxford, Iowa, to assume command on lap 37 just moments before another caution flag flew.

The remaining circuits were all Sheppard, who registered his series-leading seventh triumph of 2018 by 1.317 seconds over Simpson.

Jimmy Mars of Menomonie, Wis., advanced from the 10th starting spot to finish third, just over 1 second behind Simpson. The semi-retired Brian Birkhofer of Muscatine, Iowa, who won the only previous WoO stop at Dubuque in 2005, made his first start in nearly a year in a Jason Rauen-owned Longhorn Race Car and finished fourth while Tyler Erb of New Waverly, Texas, rallied from a lap-15 pit stop to complete the top five.

Sheppard acknowledged that he took a difficult path to victory lane, but he relished his achievement.

“It was real treacherous around the high side,” said Sheppard, who perched his Rocket Chassis house car in the top groove to make most of his headway after pitting. “But if you got all the way up against the wall it was fairly smooth getting in the corner, and I could get turned and get pointed straight down the straightaway so I didn’t bounce through the holes coming off.

“It was just a phenomenal race,” he added. “It was hard to drive, but it was a lot of fun out there.”

Sheppard’s 31st career WoO checkered flag also helped draw him back into the thick of the championship hunt. He entered the race 60 points behind leader Chris Madden of Gray Court, S.C., and 56 in arrears of second-place Marlar, but he shaved 14 points off his deficit to Madden, who finished seventh after a heat-race tangle forced him to use a provisional and start 23rd in a backup car, and gained 26 markers on Marlar, who settled for a 13th-place finish after giving up the lead to a flat tire with five laps remaining.

But B-Shepp asserted that the points standings aren’t on his mind.

“The points, I’m not even thinking about it right now,” Sheppard said. “I’m just going for broke trying to win these races. (The points are) obviously always in the back of your head, but at the end of the day, to win the points, you’ve got to beat them guys (ahead of him). If we’re winning races, we’re beating ‘em.”

“It just slicker and then the ruts just got bigger, so all in all, we’ll take it,” said Simpson, who started from the outside pole and ran second for most of the distance. “We got a right-rear flat so I felt like that was messing up at the end of the race … it is what it is.

“To run second to these guys … these guys do it for a living and we work Monday through Thursday. We’ve been struggling the last couple weeks, so we tested last night and then to come here and run good makes us feel good.”

“We didn’t qualify very good,” Mars said. “I probably could’ve pushed it harder, but we were on the edge of bicycling there so I just kind of took what I could get.”

Six caution flags slowed the feature. The first came on lap nine when Steven Roberts and Skip Frey tangled. Subsequent yellows flew on lap 15 for Erb; lap 19 for Shane Clanton, who slowed with a right-rear flat tire while running third; lap 30 for Roberts stopping in turn two; lap 35 for Marlar; and lap 37 for John Emerson slowing in turn two.

Notes: Sheppard’s victory was extra special for his car chief Danny White, who is a native of Dubuque, Iowa. “It’s just awesome to come home (and win),” White said. “I’ve got family and friends everywhere … it’s just really neat. This one’s probably real close to the top of the list (of wins he’s enjoyed as a crewman).” … Madden was angered by his involvement in a tangle on the first lap of Heat 3 with Brent Larson and Jonathan Brauns. His car was towed off dangling between two wreckers, forcing him to pull out his backup machine and work hard to salvage a seventh-place finish. … Brauns continued after the heat-race incident, but one lap later he flipped his car twice in turn four. He escaped injury in the accident. … Devin Moran’s streak of top-five finishes in WoO competition came to an end at six, but his sixth-place finish was enough to push him past Rick Eckert for fifth in the points standings. … Missing from competition was Texan Morgan Bagley, who has been a WoO regular since the start of the 2013 season.