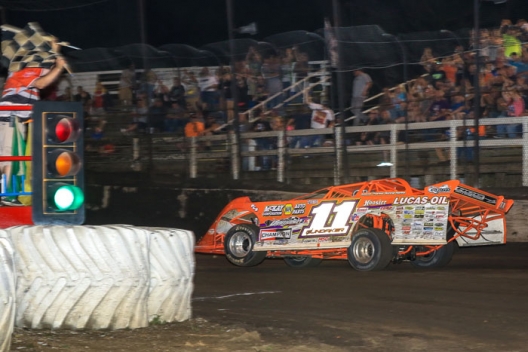 MACON, Ill. — Gordy Gundaker spent much of the first 85 laps of Thursday’s Herald & Review 100 trying to find a way around race leader Brian Shirley. And just when it seemed the Chatham, Ill., driver was headed to his second straight DIRTcar Summer Nationals victory, the leader ran into trouble.

Taking the lead for good on lap 94 when Shirley slowed with a broken right-rear axle, Gundaker paced the final seven laps to win the Herald & Review 100 at Macon Speedway. The St. Charles, Mo., driver earned $5,000 in winning his first career DIRTcar Summer Nationals feature, while beating Ryan Unzicker of El Paso, Ill., to the checkers by 1.398 seconds.

Unzicker, who was among a trio of drivers who challenged Shirley for the top spot but never managed to have a firm grasp on it, finished second ahead of Frank Heckenast Jr. of Frankfort, Ill., and Kevin Weaver of Gibson City, Ill. Tyler Erb of New Waverly, Texas, finished fifth while driving a backup car owned by Georgia racer Steven Roberts. Heckenast and Erb rallied from the rear after being involved in separate accidents early in the 100-lapper on the tight fifth-mile oval.

From the onset, Gundaker was married to the low groove. When Shirley blasted into the lead from the pole, Gundaker made sure he was motoring right around the infield tire barriers. When Shannon Babb of Moweaqua, Ill., moved forward from fourth to challenge for the lead, Gundaker stayed patient and circled the bottom. When Unzicker, who started third, moved up against the cushion and made a run at the leader, Gundaker stayed true to the bottom.

“I got in a groove there. I saw Brian about a straightaway out and I looked up and it said lap 76 and I knew I had time. I just had to keep hitting my marks. I could see (my brother) Trev telling me I had some room I guess between Unzicker and me and I started pushing the button a little bit more. And once I got to (Shirley), it was on.”

Gundaker actually led laps early, but never could pull away. He nosed ahead on lap 15, but Shirley answered. Gundaker grabbed the led briefly on lap 28, but again, Shirley had an answer. By the halfway mark, Unzicker was in the thick of it as well. Unzicker pulled even with Shirley on lap 56, only to have Shirley go back out front on lap 57.

“We had a couple good runs. We was just a little too free,” Unzicker said. “I’m always scared to tighten up (my car) at this place … a hundred laps is a long time … I can get real tight. I kept her pretty free tonight and it just wasn’t the ticket. I needed to snug her up a little bit and maybe we could’ve challenged Gordy.”

Shirley finally managed to pull away from both Gundaker and Unzicker with 30 laps remaining and by lap 73 enjoyed a 3.203-second lead, his largest advantage of the race. But traffic, which had thinned thanks to attrition that produced eight cautions, still became a factor. With 15 laps remaining, Shirley was stuck behind a trio of cars battling for position. On lap seven, Gundaker had cut the led to less than a second and a lap later the lead was all but gone.

“I got to Brian there at the end and was trying to be patient,” Gundaker said. “It’s so hard when you’ve got them guys stopping in front of you. I know (Shirley) was pushing the issue. Man we just raced so hard, so clean, it felt like four or five wide there for a little bit. We were trying so hard right there at the end.

“I think both of us were. We were pushing our stuff to the limits. I was doing everything not to hit those lapped cars. Me and Brian raced clean together forever. We ran door to door and I couldn’t ever tell if I was in front of him or if he was in front of me. You’re trying to see how many laps (there is) to go. You’re just pushing the issue as hard as you can without over driving.”

Gundaker slipped by Shirley with eight laps remaining, but just as Shirley regained the lead, the broken axle ended his night.

“We’ll fix it and go back … what do we got, 10 more days? We’ve got plenty of time,” said Shirley of the tour’s month-long grind. “Sometimes, racing’s not always gonna be on your side. We had a good enough car to win the race. I think we showed that as far as leading up to five (laps) to go. We’ll see what tomorrow brings.”

With Shirley off the track, Gundaker raced unchallenged the rest of the way.

“I didn’t think I could get him,” said Unzicker, who opted to protect his runner-up finish rather than make a bid for the lead. “I was pretty much protecting the bottom and taking my second-place finish and roll on to the next one. We was struggling there at the end, so being able to come home second is pretty good for us.”

Heckenast felt equally as fortunate about his podium finish, especially considering he was involved in a five-car melee on lap three that left his car sitting on its side in turn two.

“I almost had my first rollover there,” Heckenast related. “We came in and the toe (in the steering) was all messed up so Axle just straightened it out and sent me back out to see if it was worth anything. I planned on pulling in and then all the sudden it was like, there’s one car, there’s another on and there’s another one and before I knew, the cautions were coming out in my favor.”

Notes: The race was slowed by eight cautions, most for minor tangles. … Eleven cars were running at the finish, with seven completing all 100 laps. … Shannon Babb’s night ended on lap 53 when he slowed with a broken axle. … Rusty Schlenk’s night came to an end on the first lap after shearing the bolts off the transmission coupler in his car’s drivetrain. … Weaver, the overall fast quaifier, was never far from the top five, though he was never able to challenge for the lead. … Erb went to the back after stopping and pitting on lap 18.

Brian Shirley led all six laps to win the dash and earn the pole starting position for the main event. Gordy Gundaker finished second, .682 of a second back, and Ryan Unzicker was third. The dash for the top two finishers in the heats, determined the starting order for the first three rows.

Ryan Unzicker of El Paso, Ill., slipped by Tyler Erb and Frank Heckenast Jr. when those two made contact on the opening lap and paced the final nine circuits to win the final heat. Erb finished second to join Unzicker in the dash, while Heckenast, Steven Roberts and Joseph Hughes completed the top five.

Using momentum from the top, second-starting Gordy Gundaker of St. Charles, Mo., led all 10 laps to win the second heat. Gundaker got the jump on overall fast qualifier Kevin Weaver on the opening lap and was never headed. Both Gundaker and Weaver advance to the dash, while Rusty Schlenk, Jason Feger and Justin Reed advance to the feature. The race was slowed by one caution.

Brian Shirley of Chatham, Ill., powered into the lead from the outside front row and went on to top Shannon Babb by two seconds to win the first heat. Shirley and Babb will advance to a dash — along with first and second from the second and third heats — to determine the first three rows for the feature. Brian Diveley, Paul Stubber and Dean Carpenter completed the top five to grab the remaining transfer spots.

Macon is set for the 38th Herald & Review 100 following a late afternoon rain shower that passed through town. … The shower delayed action for approximately 30 minutes, but it was welcome as it brought significantly cooler temperatures. … Kevin Weaver of Gibson City, Ill., was the overall fast qualifier. Weaver, seeking his fifth career DIRTcar Summer Nationals victory at Macon, earned the pole position for the second heat. … Tyler Erb of New Waverly, Texas, is with the tour for the second straight night piloting the backup car of Georgian Steven Roberts. Erb was in contention to win Wednesday night at Fayette County before contact with a lapped car ended his night. Erb, a World of Outlaws regular, will be back with that tour on Friday as they travel to Dubuque (Iowa) Speedway. … Struggles continued for Freddie Carpenter of Parkersburg, W.Va. After having to replace a reared in his Kryptonite Race Car Wednesday night, Carpenter got into the wall during Thursday’s hot lap session and was unable to make repairs before time trials. … Gunntown, Miss., driver Jason Milam is back behind the wheel of his father-in-law Dean Carpenter’s Pierce Race Car. Carpenter, who said Milam planned to make the trip anyway, said he told the youngster to bring the car along if he wanted. … Carpenter, of Coldwater, Miss., has entered every MARS Racing Series race this season. He said he intends to head to Brownstown, Ind., on Saturday to join that tour. … Notable drivers not in action this year, Bobby Pierce and Brandon Sheppard, are busy with their respective primary tours. Sheppard, of New Berlin, Ill., did compete at Fayette County on Wednesday in his family-owned Rocket, but said he was too busy to race at Macon as he prepared to leave for Iowa to meet up with the Rocket Chassis house car team. Pierce, who now drives for the North Carolina-based Dunn Benson Motorsports team, is in the Tar Heel state competing with the Lucas Oil Series, although the Lucas Oil Series race at Fayetteville Motor Speedway was rained out Thursday.

Kevin Weaver of Gibson City, Ill., set the overall fast time with a mark of 10.452 seconds. Weaver hit the track second in the second group and quickly set the bar. Gordy Gundaker of St. Charles, Mo., turned a lap in 10.761 seconds and will join Weaver on the front row of the second heat.

Shannon Babb of nearby Moweaqua, Ill., was the quick qualifier in the first group with a lap of 10.716 seconds, while Brian Shirley of Chatham, Ill., stopped the clock at 10.762 seconds as the top two drivers  in the tour standings will roll off beside each other in the night’s first heat.

Frank Heckenast Jr. of Frankfort, Ill., earned the pole position for the third heat with his mark of 10.697 seconds in the final group. Tyler Erb of New Waverly, Texas, was next at 10.817 and will start second.

In all, 10 of the 28 drivers clocked in under the 11-second mark, with five of them going out in the second group.

Macon Speedway hosts Thursday's 15th round of the DIRTcar Summer Nationals with a $5,000-to-win purse on the line at the 1/5-mile oval as the tour heads into the meat of its Independence Week stretch. The 38th Herald & Review 100 has long been a staple on the month-long grind and remains as the only 100-lap event on the slate.

Shannon Babb’s run toward a fifth Summer Nationals title has soured after back-to-back nights of bad luck. Babb, of Moweaqua, Ill., broke a right rear wheel while leading Tuesday at Clarksville (Tenn.) Speedway and was swept up in a crash while running third Wednesday at Fayette County Speedway in Brownstown, Ill. Brian Shirley of Chatham, Ill., meanwhile, has paired consistency with a couple series victories to surge into the points lead. Wednesday’s Fayette County winner leads Babb and Jason Feger of Bloomington, Ill., in the title chase.

Babb, whose shop is only a 10-minute drive from Macon Speedway, hopes to get back on track as he chases his sixth career Herald & Review 100 win and first since 2014. Modifieds and B-mods are on the undercard. Hot laps are tentatively set for 6 p.m.