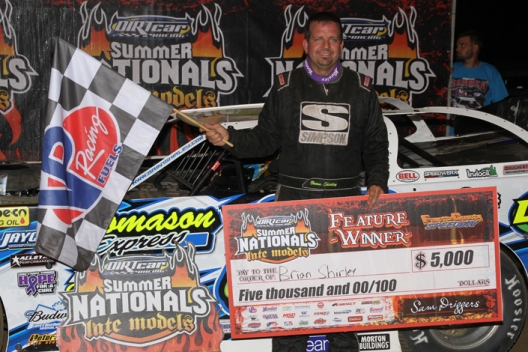 BROWNSTOWN, Ill. — One by one the challenges came. But with a fast car and a little help from Lady Luck, Brian Shirley systematically repelled them. Shirley, of Chatham, Ill., won his second DIRTcar Summer Nationals feature of the season, but it wasn’t without a few tense moments.

Shirley had to defend the top spot from a handful of would-be challengers, chief among them Tyler Erb of New Waverly, Texas, and Sheppard. Erb, making a guest appearance in the backup car of Jesup, Ga.’s Steven Roberts, started alongside Shirley on the front row, and it didn’t take long for Erb to get the high side rolling. He nosed ahead of Shirley to lead laps 14 and 15.

But as the leaders knifed their way through heavy lapped traffic, Erb and third-running Shannon Babb of Moweaqua, Ill., were collected in a crash when they caught the slower car of West Virginia’s Freddie Carpenter. All three cars went to the rear of the field, with Babb retiring from the race before another lap could be completed. Shirley had just retaken the lead from Erb when the scrum happened behind him.

“I didn’t know what the right move was,” said Shirley. “I was just trying to bide my time. I was nervous because Turbo (Tyler Erb) has nothing to lose. All he can do was just go for the win. For me I just wanted to finish the race in a good position, so when we were sliding each other back I appreciate that there was a lot of respect there for the slide jobs. All in all, we’re just thankful to come out of here with the win.”

Shirley wasn’t quite in the clear just yet, however. The departure of Erb and Babb gave Sheppard a clear shot at the leader and the 2017 World of Outlaws champion took advantage. Sheppard grabbed the lead on a restart and paced the field for five circuits before Shirley finally powered back ahead on the high side.

“(Sheppard) tried to move up there right at the last minute and luckily we were fortunate that we were just far enough ahead to hold him at bay and have that high line come back to us,” said Shirley.

Sheppard, behind the wheel of his family-owned No. B5, knew he trusted the bottom groove a little too long.

“I knew the top’s usually the best place to be here,” Sheppard said, “but it was real dirty up there and my car really wasn’t as good as it needed to be up top and I was really good around the bottom, so I kinda stuck down there and was hoping that the top wouldn’t clean up like it did. It ended up cleaning up and getting real black. It was just better up there and I didn’t move up in time.

"Our car was really good. We took the lead, so no complaints. (I) just should’ve moved up sooner.

“I knew we were pretty good on the bottom. It was hard to hit your marks ‘cause there were a lot of slick spots and my car was really tight. I got in a pretty good rhythm down there and I heard ‘em on my outside. It’s hard to see the signal guys when they’re in the infield here. It’s usually better when they’re on the outside. But the hot pit was in the infield and that's where they had to go. I knew better. It’s my own fault, but just … go on to the next one.”

Feger had a perfect view of the action just in front of him. He said he would’ve been happy for it to have continued for a few more laps.

“I didn’t want to see that yellow because we were slicing and dicing with the lapped cars there and I think it was gonna be really good,” said Feger. “(My) car’s handling real good. We had a right rear tire going down. When we came in it was almost to the rim. I was really struggling there the last five or 10 laps, but the car (has been) handling good. If the driver can figure out how to qualify we might can win a race.”

Notes: Shirley’s win, coupled with Babb’s 19th-place finish, pushed Shirley into the series points lead (unofficially). His workmanlike effort has been aided by Babb’s tough luck in the last two races. “It’s still … listen, Shannon Babb is a hell of a wheel man. There’s still a week and a half left of racing. It’ll probably come down to the wire, which will probably be good for the fans that it comes down to the last race. It’s good that we fought back to put ourselves back in contention,” said Shirley. … Tanner English, winner of Tuesday’s race at Clarksville (Tenn.) Speedway, spun from contention on a lap-15 restart, and, thinking he was spun by Jason Feger, was upset that he was told to tag the rear of the field. He instead parked his car sideways on the front straightaway. After a short conference with officials, English pulled to the pit area, calling it a night. … It was Shirley’s 17th career DIRTcar Summer Nationals victory and second tour win at Fayette County. … Shirley has four wins at Fayette County this season, a pair of MARS-sanctioned triumphs and a weekly victory to go along with Wednesday’s win.

Brian Shirley of Chatham, Ill., the winner of the first heat, earned the pole position for the 40-lap feature via the heat winners redraw. World of Outlaws interloper Tyler Erb of New Waverly, Texas, will start on the outside front row and Shannon Babb of Moweaqua, Ill., will start inside row two. … Both Shirley (2012) and Babb (2002) have won a Summer Nationals feature at Fayette County. … With his win in the consolation race, Allen Weisser of Peoria, Ill., gained entry into the main event and was joined by Freddie Carpenter and Brian Diveley. Shannon Kuhn finished fourth in the consolation race and will start the main event as well by virtue of a track provisional. Australian Paul Stubber and Ohio’s Chuck Hummer earned the Summer Nationals provisionals, while Mike Hammerle gets the DIRTcar provisional. … A fireworks show is planned before Wednesday’s features.

Taking control on the opening circuit, Allen Weisser of Peoria, Ill., cruised to victory in the consolation race, winning by a straightaway over Freddie Carpenter. Brian Dively emerged form a four-way battle for third to grab the final transfer spot.

Shannon Babb led the distance to win the third heat. Babb, of Moweaqua, Ill., started from the pole and was never seriously challenged in winning in front of Tim Manville and Daryn Klein. Klein and Manville had a back-and-forth battle for the runner-up spot as the two swapped the position repeatedly over the final five laps. Klein spun as the pair exited turn four on the final lap, giving  Manville the spot at the finish. Klein was third and Gordy Gundaker finished fourth.

Tyler Erb of New Waverley, Texas, won the battle with fellow World of Outlaws star Brandon Sheppard to win the second heat. Erb and Sheppard ran side by side for a lap and a half before Erb pulled away to win by a half a straight. Sheppard finished second, with Ryan Unzicker third and Rusty Schlenk fourth.

Polesitte Brian Shirley of Chatham, Ill., beat Tanner English into turn one on the opening lap and pulled away to win the first heat easily. Shirley opened up a straightaway lead over English, who fell into a battle for the second spot with Frank Heckenast Jr. and Jason Feger. Feger grabbed the second spot, with English finishing third and Heckenast fourth.

Making a guest appearance in Steven Roberts’ backup car, Tyler Erb of New Waverly, Texas, set the overall fast time among 28 cars. Erb went out first in the second group and stopped the clock at 12.54 seconds to earn the pole position for the second heat alongside Brandon Sheppard.

Brian Shirley of Chatham, Ill., was the fast qualifier in the first group and will start on the front row of the first heat, with Tuesday winner Tanner English to his outside.

Series points leader Shannon Babb of Moweaqua, Ill., starts on the pole of the third heat after setting the quick time in the final group. Daryn Klein will start in the front row with Babb.

The top five finishers from each heat transfer to the 40-lap feature. The remainder will fall to a consolation race to set the rest of the feature lineup.

Despite temperatures hovering in the mid to low 90s Wednesday, the humidity — which is well above 60 percent — has left fans and competitors scrambling for shade. According to weather.com, it felt like 102 degrees as the DIRTcar Late Models hit the track at 6:45 p.m. for their hot lap session. … Brandon Sheppard of New Berlin, Ill., has his family-owned No. B5 Rocket XR1 at Fayette County. Sheppard is making his third series start this season, but first in his family’s equipment. Sheppard won last year’s tour stop at Fayette County as well as the 2014 visit. … Tyler Erb of New Waverly, Texas, is making a guest appearance in the backup car of Steven Roberts of Jesup, Ga. When questioned about the pairing, Erb said his “personality” meshed with Roberts. Erb has spent the last few days at Brian Shirley’s shop in Chatham, Ill., preparing his equipment for the World of Outlaws upcoming swing through Minnesota and the Dakotas. … Dean Carpenter of Coldwater, Miss., is making his first series start this season. Carpenter, who made a handful of appearances with the series last season, brought along Jason Milam of Gunntown, Miss., who will pilot Carpenter’s backup car. Milam, who normally drives Crate Late Models, is making his first-ever appearance with the DIRTcar Summer Nationals. … Randy Bingham of Greenville, Ill., is making his first start of the season. Bingham, whose job keeps him away from home for months at a time, is home awaiting the birth of a grandchild, so he decided to dust off his No. B1 and join Wednesday’s Summer Nationals field. … There are five former Fayette County Summer Nationals winners in Wednesday’s field: Sheppard, Shirley, Shannon Babb, Jason Feger and Ryan Unzicker. … It’s been 16 years since Babb’s June 21, 2002 victory. … Wednesday’s 28 drivers represent nine states — Georgia, Illinois, Kentucky, Mississippi, Missouri, Ohio, Texas, West Virginia and Wisconsin — as well as Australia.

Fayette County Speedway hosts Wednesday's 14th round of the DIRTcar Summer Nationals as the series works it’s way back to the Land of Lincoln following Tuesday’s show at Clarksville (Tenn.) Speedway, the tour’s lone stop in the Volunteer State. A 40-lap, $5,000-to-win main event is on tap at the quarter-mile fairgrounds oval.

Shannon Babb of Moweaqua, Ill., seeking his fifth DIRTcar Summer Nationals title, looks to bounce back after a broken wheel ended his night three laps short of a potential victory at Clarksville. Babb’s points lead, which he’s had since the series kicked off three weeks ago, has been trimmed to 21 points by the steady pace of Brian Shirley of Chatham, Ill., who finished second on Tuesday. Babb has 10 top-five finishes and a series-leading five victories, while Shirley now has 11 top-fives and single victory. Hall of Famer Billy Moyer, who was third in the standings entering the week, wasn’t at Clarksville Tuesday and will likely skip Wednesday’s event as well.