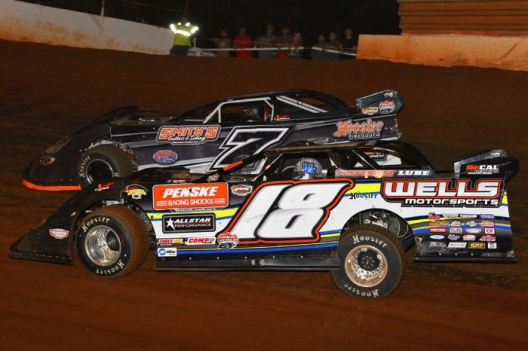 Michael Moats/mrmracing.net
Eric Wells (18) gets under Brian Smith (7) to grab the Tazewell lead.
What won the race: Ending a long absence from victory lane, Eric Wells of Hazard, Ky., overtook Brian Smith for the lead on lap 19 and went to capture Tuesday night's wild, caution-filled 40-lap feature co-sanctioned by the Schaeffer's Southern Nationals Bonus Series and Iron-Man Series at Tazewell Speedway. He crossed the finish line 3.057 seconds ahead of Smith, who led three laps after the demise of early leader Dakotah Knuckles.
Quotable: "I told my guys before we went out, I was going to try to maintain for about 20 (laps), then give it what I had for the last 20," winner Eric Wells said. "Because last time we was here, we got the lead and I overworked my tires and we ended up fifth. We made notes and learned from it."
Key notes: A caution erased the winner's first pass for the lead. ... Wells got his first victory since Nov. 5, 2016, when he won the Fall Classic at Ponderosa Speedway in Junction City, Ky. ... He has two victories apiece on the Schaeffer's Southern Nationals Bonus Series and Iron-Man Series. ... A lap-17 frontstretch tangle included contenders Chad Ogle, Chicky Barton and Jeff Neubert. ... The feature's early leader, Dakotah Knuckles of Ewing, Va., retired to the pits with a loose oil line on lap 17.
On the move: David Payne of Murphy, N.C., started 16th and finished third.
Winner's sponsors: Wells drives a Longhorn Chassis powered by a Cornett Race Engine and sponsored by Penske Racing Shocks and Allstar Performance.
Points chase: David Payne of Murphy, N.C., moved into the points lead over Aaron Ridley, who to the pits with problems and retired on the 17th lap.
Car count: 19
Fast qualifier: Dakotah Knuckles
Time: 11.491 seconds
Polesitter: Brian Smith
Next series race: August 18, North Georgia Speedway (Chatsworth, GA) $10,000
Editor's note: Corrects finishers 13-16.