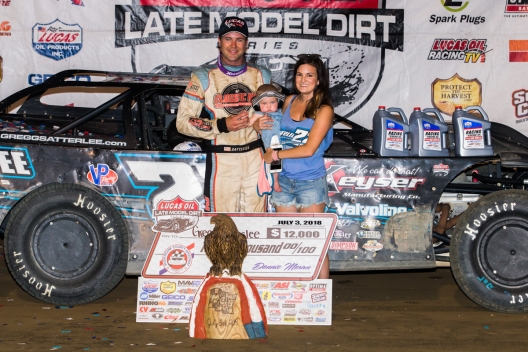 “To say our team’s been struggling this year,” Satterlee said, “I guess that’s pretty obvious.”

Indeed, Satterlee, 33, of Indiana, Pa., has been mired in a season-long slump on the national tour. Since registering a pair of third-place runs during February’s Winternationals at East Bay Raceway Park in Gibsonton, Fla., he hadn’t finished better than seventh in Lucas Oil action.

But Satterlee’s fortunes turned around in dramatic fashion in the finale of the Lucas Oil Series’s four-race holiday-week swing through the Buckeye State. He was simply without peer in the A-main, roaring off the outside pole to grab the lead from front-row mate Josh Richards of Shinnston, W.Va., at the initial green and then staying there for the remainder of the distance without facing even a cursory challenge.

Satterlee maintained a consistent straightaway-plus lead on Darrell Lanigan of Union, Ky., for the race’s first 39 uninterrupted circuits and easily pulled away following the lone restart with 11 laps left. He steered his father Gary’s XR1 Rocket under the checkered 2.066 seconds in front of Lanigan’s Clint Bowyer Racing Club 29 mount to earn $12,000 for his second career triumph on the Lucas Oil Series.

Lanigan, 48, settled for a season-best Lucas Oil finish of second after starting fourth and running in the number two position for all 50 laps. His previous high-water mark on this season’s tour was fifth place on three occasions, including the previous evening at Sharon Speedway in Hartford, Ohio.

Jonathan Davenport of Blairsville, Ga., completed a steady advance from the 10th starting spot with a lap-43 pass of Oakwood, Ill.’s Bobby Pierce that landed him a third-place finish in his Lance Landers Racing Longhorn car. The polesitting Richards slipped backwards at the start of the A-main after placed fourth in his Best Performance Motorsports XR1 Rocket while 17-year-old Hudson O’Neal of Martinsville, Ind., gained three spots during the feature to complete the top five in his Todd Burns-owned Club 29 machine.

Don O’Neal of Martinsville, Ind., Hudson’s 53-year-old father, saw his bid for a third consecutive Lucas Oil triumph effectively come to an end on the race’s lap-39 restart when he slid high in turns one and two while bidding to grab second place from his teammate Lanigan. The elder O’Neal tumbled all the way to 12th in the final rundown.

Satterlee, whose only previous Lucas Oil Series victory came on April 23, 2016, at Hagerstown (Md.) Speedway when he passed Scott Bloomquist of Mooresburg, Tenn., on the final lap, hailed his Robby Allen-led crew for sticking with him through a difficult first five months of 2018.

“We’ve not been running good lately, but we have a pretty level-headed team,” said Satterlee, who in in his second season as a Lucas Oil regular. “We know what we’ve got … it’s just awesome to finally put a whole night together and get a win.

“This is a tough group of cars we’re racing with this year. If you’re off just a little bit, you don’t even finish in the top 10. But we’ve been working hard … we’ve had a good car the last couple nights and I said, ‘We just need to get a whole night put together and we can win one of these races.’”

That finally happened for Satterlee, who put together the most dominant performance of his short Lucas Oil career. No one could stay with him on the 3/8-mile oval promoted by Ronnie Moran, the father of Hall of Famer Donnie and grandfather of World of Outlaws Craftsman Late Model Series regular Devin.

“I was checking my signal guy Drew (Walters) there in the infield and I was thanking him every time I went by him,” Satterlee said. “I was like, ‘Drew, just keep those hands apart and I can just make consistent laps and save my tires.’ I didn’t want to pop one there towards the end leading.”

For Satterlee, the best part of his win might have been the smiling face he had greet him after the race. His wife, Kelsey, handed him their infant daughter Prudence, who made her first victory lane appearance.

“I’m just really thankful that my wife and dad and baby were here for this win,” said Satterlee, who remained 11th in the Lucas Oil points standings, 60 behind 10th-place Lanigan.

Lanigan ceded only a minimum of points to Satterlee thanks to his best Lucas Oil outing of the 2018 campaign. He had nothing for the victor, however.

“His car definitely was pretty good tonight,” Lanigan said of Satterlee. “We actually had a pretty good hot rod for what we’ve had here lately, so I’m definitely proud of our team.

“We’ve been working hard trying to work on some new stuff. Me and J.D. (Davenport) was talking … you just take a lot of stuff you were doing for granted and you overlook a lot of things and you gotta go back and check everything out and see what you’re missing.”

Davenport, 34, didn’t reach third until late in the distance, but he was pleased with his run. He began the Ohio swing with dismal finishes of 17th at Portsmouth Raceway Park and 12th at Mansfield Motor Speedway before righting his ship with a fourth at Sharon.

“This almost feels like a win as bad as we’ve been this whole swing we’ve been on,” Davenport said. “I just gotta thank all my guys. They’ve been working like borrowed mules here. We’ve been beat like a drum here the last three or four races, but I think we’re going in the right direction. We drove up through there pretty good tonight.”

Notes: Satterlee became the 13th different winner on this year’s Lucas Oil Series. … The race’s only caution flag flew on lap 39 for Earl Pearson Jr. of Jacksonville, Fla., who slowed with terminal mechanical trouble. … Bloomquist was running at the back end of the top 10 following the lap-39 restart when he slowed with mechanical trouble. He remained on the track for the final circuits but limped around well off the pace, leaving him two laps down in 19th place at the finish. The poor result cost him second in the points standings to Richards. … Devin Moran won a heat and started third at his home track, but a near-spin between turns three and four on the opening lap of the feature immediately dropped him to fifth and he never recovered. He struggled to an 11th-place finish. … Pierce ran third for much of the distance, but he slipped to an eighth-place finish after his Dunn-Benson Racing machine became increasingly loose in the closing stages. … The Lucas Oil Series is off for Independence Day before starting a three-day Southeastern swing July 5-7 that takes it to Fayetteville (N.C.) Motor Speedway, Cherokee Speedway in Gaffney, S.C., and Smoky Mountain Speedway in Maryville, Tenn.