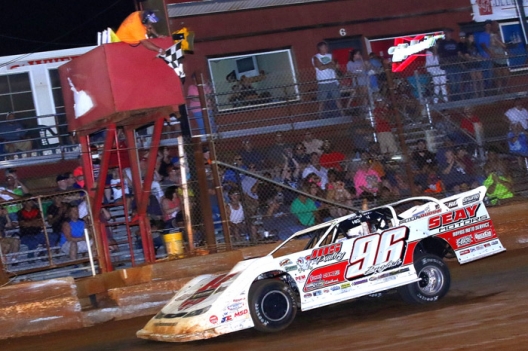 CLARKSVILLE, Tenn. — Tanner English knows how to get around Clarksville Speedway. His eight victories at the quarter-mile oval last season serve as proof enough. Tuesday, however, the Benton, Ky., driver put a bigger feather in his cap.

English inherited the lead from race-long leader Shannon Babb of Moweaqua, Ill., on lap 37 when Babb busted a right rear wheel and careened into the turn two wall. English then held off Brian Shirley of Chatham, Ill., over the final three laps to collect his first career DIRTcar Summer Nationals victory and a $5,000 payday.

“I don’t know what to say about it,” said a near speechless English. “I’ve always wanted to win one of these. It’s pretty cool. It’s just … everything I’ve ever wanted. You know, it’d be even better to win a Lucas (Oil Dirt Late Model Series) deal or something, but here, at Clarksville, my home track, or pretty much my home track now, it’s just really cool.”

Finishing 1.118 seconds behind English, Shirley finished just ahead of Allen Weisser of Peoria, Ill., whose third-place finish is a career-best in Summer Nationals competition. Jason Feger of Bloomington, Ill., rallied from 14th to finish fourth, while Rusty Schlenk of McClure, Ohio, finished fifth after starting 11th. Babb, the series points leader entering Tuesday’s race, finished 12th after leading 37 laps from his second starting position. English was alongside Babb — where he’d been challenging for the lead for nearly a dozen laps — when the center broke out of Babb’s right rear wheel and his familiar red and black No. 18 suddenly pitched right and smacked the wall in turn two.

Babb dominated the first half of the 40-lap main event, turning back challenges from Shirley and polesitter Terry English. But as the race wore on, Tanner English — and a host of others — continued to get faster. When Terry English got into the backstretch wall on a lap-12 restart, Babb gained a measure of breathing room. But it didn’t last much longer. After a caution on lap 17 bunched the field yet again, Tanner English soon began to pester the leader, continually charging the bottom of the race track to pull even in the turns.

“I knew (Babb) was driving me clean,” said Tanner English. “I showed him my nose a couple times and he never cut me off. He always left me a lane. It’s just good to race with guys like that … that’ll leave you some room and let the race play out by itself and not end it.”

Babb, trying to keep English at bay, never stopped searching for the quickest way around the little bullring. With English working the bottom and the top side slowly losing its advantage, Babb decided he opt for the bottom as well on lap 33. The pair knifed their way through lapped traffic over the next four lap until English managed to pull even with Babb heading into turn one. Then, in a blink, Babb was sitting against the outside wall and English was gone.

“Going into (turn) one there I just broke the center out of the right rear wheel,” said Babb. “I just about got on my lid I think. The track had a lot of holes in different places. On this deal there’s been a lot of wear and tear. There’s only so much time you can put on all these parts and pieces before they get fatigued and give up. I just jinxed myself (Monday) by telling all my guys that when this Summer Nationals is over I need to sell all wheels and buy new ones and sure enough, one let go.”

Once in front by himself, English then had to hold off Shirley, a driver with one DIRTcar Summer Nationals win this season and hungry for more.

“I could see my brother giving me signals,” said English. “We had a pretty good lead before that caution, but I was still worried. You know, it’s (Brian) Shirley and he’s been good. You just want to hit your marks. I’ve never been so nervous as those last three laps I don’t think.”

Shirley, who had a couple of near misses during the feature when he jumped the cushion as well, could never mount a serious challenge though.

“The biggest thing was I was trying to run that top and when I’d get too close to Tanner the air would push me right into the wall,” said Shirley. “A couple of times I damn near did what Babb did and stuffed it into the wall. Luckily the car was strong enough to hang on and battle back up to third there before Babb got into the wall there.

“Tanner is really good here. He’s got more laps than anybody. I felt like he had a strong car. Realistically, he’s in the same car we are and he’s just as good a driver as I am, so he held his own and got the win. Obviously I tried to go to the top to see if I could get anything up there but there just wasn’t enough left up there to make anything happen.”

Notes: Tanner English picked up his second special event win in four days. He earned a $4,000 victory in Duck River Raceway Park's Southern All Stars race Saturday. … It was the ninth attempt at a Summer Nationals race at Clarksville for Tanner English. His best finish prior was second place in 2016. He also has a pair of fourth-place finishes (’12, ’14), but nothing better than his 10th-place run last season beyond that. Along with a 14th (’10) and a 20th (’15), English also has a pair of DNQs (’11, ’13). … The race was slowed by five cautions, each for a lone car. Dustin Rollins spun (lap 12); Terry English hit the wall (lap 12 restart); Freddie Carpenter stopped after hitting the front stretch wall (lap 15); Gavin Schmidt spun (lap 17): and Babb tagged the wall (lap 37). … Fourteen cars were running at the finish, with twelve cars finishing on the lead lap. Babb the last to complete the full 40. … David Seibers of Chapel Hill, Tenn., ran as high as third before jumping the cushion in turn three and losing about 10 spots.

DIRTcar Summer Nationals drivers were called to staging at 9:55 p.m., just as the modified feature rolled to green. … After a blistering hot afternoon, temps have cooled and it’s quite comfortable out. … Winner of the second heat, Terry English of Benton, Ky., will start from the pole after earning the spot via the redraw. Series points leader Shannon Babb, looking for his fourth career series win at Clarksville, will start from outside the front row, while Brian Shirley will roll off third. … A trio of drivers — Rusty Schlenk, Freddie Carpenter and Jason Feger — are looking for improvement in the 40-lap main event. They’re starting 11th, 13th and 14th, respectively, following subpar efforts in their heats.

Shannon Babb of Moweaqua, Ill., led all 10 laps of the caution-free third head from the pole. Babb won by a half-second over Allen Weisser of Peoria, Ill., who grabbed the second spot from Frank Heckanast Jr., on the opening lap. Babb and Weisser pulled away from the field, while Heckanast was third, comfortably in front of Gavin Schmidt.

Polesitter Terry English of Benton, Ky., led every lap to win the second heat. Gordy Gundaker of St. Charles, Mo., passed David Seibers in a lap-three restart to grab the runner-up spot. Seibers had to fend off the charge of Rusty Schlenk for third. Schlenk grabbed third momentarily, but Seibers reclaimed the spot in turn four and Schlenk settled for fourth. The race was slowed by two cautions. Paul Stubber spun at the completion of the first lap to bring out a caution. Stubber spun again on lap three.

Powering into the lead from the outside front row on the opening lap, Brian Shirley of Chatham, Ill., easily won the night’s first heat ahead of polesitter and overall fast qualifier Tanner English of Benton, Ky. English challenged Shirley briefly, making a charge on the second lap down the backstretch, but had to check up in turn four, allowing Shirley to drive away. Georgian Steven Roberts finished third with Caleb Ashby fourth. Everyone transfers into the 40-lap main event.

Going out first in the first group, Tanner English of Benton, Ky., turned a quick lap of 12.061 seconds to earn the pole for the first heat. Brian Shirley will start alongside him.

Terry English of Benton, Ky., was fastest in the second group at 12.345 to earn the pole for the second heat, with David Seibers to his outside.

Series points leader Shannon Babb of Moweaqua, Ill., will start from the pole of the third heat after his lap of 12.385 seconds was the quickest in the third group. Frank Heckenast Jr., starts on the outside front row of the third heat.

All drives transfer into the 40-lap feature. There will not be a C-main.

Clarksville Speedway hosts Tuesday's 13th round of the DIRTcar Summer Nationals as the series returns following two days off — a rainout Sunday at Lincoln (Ill.) Speedway and Monday’s scheduled day off — with a $5,000-to-win purse on the line at the 1/4-mile oval. With Lincoln’s rainout reset for July 9, competitors now face 12 straight nights of action to close out the tour.