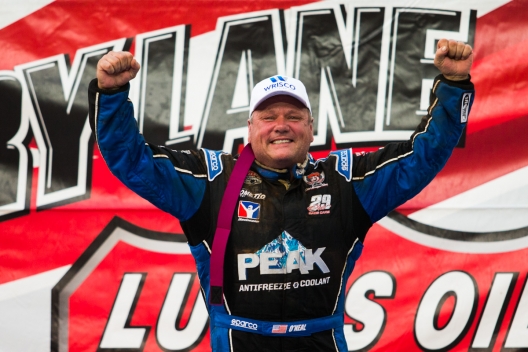 HARTFORD, Ohio — Don O’Neal entered the busy stretch of Fourth of July week action mired in one of the longest losing streaks of his Lucas Oil Late Model Dirt Series career. Suddenly he’s the owner of back-to-back victories on the national tour for the first time in more than four years.

The 53-year-old Clint Bowyer Racing driver from Martinsville, Ind., overtook polesitter Mason Ziegler of Chalk Hill, Pa., on the 14th lap and led the rest of the Steel Valley 50 at Sharon Speedway.

The third-starting O’Neal, fresh off Sunday’s victory at Mansfield (Ohio) Motor Speedway, earned $12,000 for the second night in a row as he clicked off his 45th career victory and suddenly turned around a frustrating season.

Zeigler, who led the first 13 laps, finished seven-tenths of a second behind O’Neal at the checkers for his best ’18 series finish while reigning champion and last year’s Sharon winner Josh Richards of Shinnston, W.Va., finished third. Series points leader Jonathan Davenport of Blairsville, Ga., whose bid to grab the lead from Ziegler on the sixth lap allowed O’Neal to steal the second spot, finished fourth with O’Neal’s teammate Darrell Lanigan of Union, Ky., rounding out the top five.

Davenport was able to begin rebuilding his series points lead over Scott Bloomquist of Mooresburg, Tenn., who gave up the ninth starting spot when he was late to the starting grid. He finished 13th, missing the top five for the first time on the series since May 13.

When Davenport wasn’t able to quite get alongside Zeigler in the extreme high groove, he briefly moved to the inside, went back high and then tried a crossover move exiting turn four on the sixth lap.

But while Zeigler survived Davenport’s stab at the lead, Davenport got briefly sideways in turn two and allowed O’Neal to grab the second spot.

Davenport tried to get back by O’Neal — they touched on the frontstretch on the ninth lap — while O’Neal worked on chasing down Zeigler.

With Zeigler riding the high groove, O’Neal worked the middle lane and pulled alongside on the 10th lap. Zeigler then steered to a lower groove to protect his lead, but O’Neal zipped by entering turn three on the 14th lap for a lead he’d never give up.

O'Neal built leads as big as five seconds the rest of the way in the caution-free feature. Traffic slowed his progress late and Zeigler moved back into the contention. While Zeigler finished less than a second back, O'Neal still had a single-lapped car cushion at the checkers.