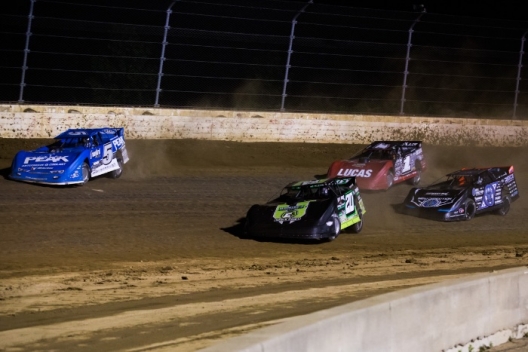 O’Neal, who earned $12,000, flashed under the checkered flag 4.130 seconds in front of third-starting Scott Bloomquist of Mooresburg, Tenn., while polesitter Jimmy Owens of Newport, Tenn., finished third. Earl Pearson Jr. of Jacksonville, Fla., finished fourth and Hudson O’Neal of Martinsville, Ind., finished fifth, both in the same position they started.

O’Neal met little resistance en route to his 44th career Lucas Oil Series win. He set the fast time in the second qualifying group and cruised to an equally dominating victory in the third heat, where he won by 3.522 seconds to earn a starting spot on the outside front row.

Once there, it was relatively easy erasing a dry spell that spanned 267 days.

After pulling ahead of Owens in turn two on the opening lap, O’Neal quickly asserted himself, driving away to leave Owens and Bloomquist behind to battle for second. O’Neal knew he was fast — he led by more than a second when the first caution came out on lap six — but was unaware of the gap he’d put between himself and Bloomquist by the end of the race.

“(The crew was) signaling (but) they didn’t say a full straightaway,” O’Neal said, adding that he still needed another win to catch team owner Clint Bowyer. “I just can’t thank everyone there at Clint Bowyer Racing (enough). We finally got one there boss. We’ve got to get another (win) to get even with (Bowyer). I’m just happy for everyone.”

Bloomquist meanwhile was just happy to be there. A week after thinking his season could be over while facing possible surgery as he dealt with a nagging shoulder injury, Bloomquist got a reprieve when he was told by a specialist that the pain he’d been feeling was likely the result of arthritis in his shoulder and that he only has a slight tear in his rotator cuff.

Bloomquist then scrapped his plans to scrap the rest of the season and joined the series for its swing through Ohio. He recorded his second straight podium finish, though he admittedly said he had nothing for O’Neal.

“(O’Neal) was a little better,” Bloomquist said. “We had some issues, stumbling a little bit with the carburetor, just causing the car to not be right through the corners … just blubbering on us. We’ll get it worked out. But he was good, there’s no doubt about it. We couldn’t run with him tonight. We’ll take our second place and keep on working.”

After winning a heat and starting from the pole, Owens felt much the same way.

“Congrats to Don O’Neal and them guys for having a good weekend.”

Notes: The win was O’Neal’s first of any kind this season. … Sixteen cars were still running at the finish, with 13 completing all 50 laps. … Two cars were one lap down, while Tim McCreadie finished nine laps down in 16th place after pitting midway to make repairs to his Sweeteners Plus-sponsored Longhorn. … A lap-23 caution appeared for Darrell Lanigan, who suffered right-front damage in a chain reaction wreck in turn two. ... Fifth in points, sixth-running Bobby Pierce slowed with steering problems on lap 14 and had his second straight DNF. ... Bloomquist and Owens both said they would study their notes and see how they could be applied when they return to Mansfield in August for The Dirt Million. “Everything applies. We’re still learning. We’re still looking. We’ll check out some things after we get back to the pits and document some things and see where we ended up,” said Bloomquist.