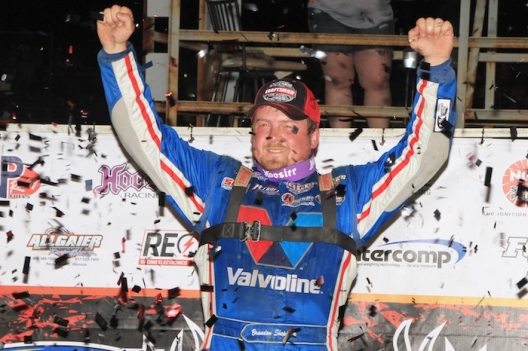 PEVELY, Mo. (June 30) — Looking to make it two in a row, Friday winner Devin Moran of Dresden, Ohio, threw everything he had at race leader Brandon Sheppard of New Berlin, Ill., on the final lap of Saturday’s World of Outlaws Craftsman Late Model Series-DIRTcar Summer Nationals co-sanctioned event at Federated Raceway at I-55.

But Moran’s charge came up short, with Sheppard taking the win at the 1/3-mile Pevely, Mo., oval for the second straight season.

Charging around the high side to overtake fourth-starting Brian Shirley of Chatham, Ill., on lap 38 of 50, Sheppard fought back a last-lap, turn-four slider from Moran, edging ahead at the line to earn a $10,000 payday in his sixth World of Outlaws victory of the season.

“Shirley was leading there and I just barely got around him on the top,” Sheppard said after the race. “It was pretty hairy up there. I slid a lot getting in the corner. It was really slick getting in and we’re kind of on the wrong tires, so I was slipping a lot more than I wanted on entry. But that bottom was getting pretty treacherous and I had a little too much dig to be able to get down there.

“I had to move back up to the top. Devin’s been really good. I seen hm get second there and I knew he was going to be wherever I wasn’t. My worst part of the track was coming off of (turn) two, so I knew if he hit that bottom right on the last lap and then sent it in there that it was going to be close. I’m glad he left me a lane because if he didn’t, we probably both would be headed to Rocket to get some clips, because I wasn’t going to lift.”

Starting fifth, Sheppard raced three-wide with Shirley and outside polesitter Shannon Babb of Moweaqua, Ill., in the early running. Closing the gap between himself and Shirley as the frontrunners worked their way through lapped traffic, Sheppard assumed the point with 12 circuits remaining, capturing his 30th career WoO victory and his 17th win on the Summer Nationals tour.

Moran settled for a second-place finish, with Shirley running third. Charging late-race, seventh-starting Rick Eckert of York, Pa., finished fourth, with Mike Marlar of Winfield, Tenn., advancing from the 10th starting spot to round out the top five.

“Honestly, I didn’t slide all the way up because I didn’t think I had the room,” Moran said of his last-lap challenge for the lead. “I was pretty far back and I dove all the way to the bottom to hit the traction. I was just kind of death-sliding up there and I thought there was no way I had him cleared. I wish I would have moved all the way to the fence. But I didn’t and we had a close second.”

Racing side-by-side with Babb for a handful of laps, Shirley grabbed the race lead on lap 14, maintaining a comfortable distance over second-running Sheppard as the pair worked through lapped traffic at the halfway mark. But he was unable to hold off Sheppard’s top-side charge, finishing third at the checkered flag.

“A caution can breed a change of events,” Shirley said. “Sheppy was just good enough to roll that outside on me. We were kind of married to that bottom because we passed everybody on the bottom. It was hard to come off the bottom until somebody passed us. Then on that restart there, the last one to go, it was just kind of back-and-forth with Moran. All in all it’s woulda, coulda, shoulda. We ran third.”

Notes: The race was slowed by four cautions. … The first yellow flag waved on lap four when Jason Feger slowed on the backstretch. … Third-running Shannon Babb slowed to draw a caution on lap 35. …  A yellow flag flew on lap 40 when Paul Stubber spun in turns one and two. … Jeff Herzog spun in the bottom of turns three and four to draw the final caution on lap 46.

Polesitter Jeff Herzog charged to the lead at the drop of the green flag, with a caution falling on the first lap when Paul Roider spun in turn four. Herzog held his lead on the restart, with Rusty Schlenk powering ahead of David Breazeale to take the second-place spot. As Allen Murray shot to second, Schlenk fell back to fourth on the fourth lap. Herzog began stretching his lead at the halfway mark, with Breazeale charging ahead of Murray down the backstretch to retake second. Herzog won the consolation, with Breazeale taking the final transfer spot.

Polesitter Brian Shirley starting pulling away early, with Gordy Gundaker overtaking Jason Feger for the second-place spot. With Shirley showing the way out front, Feger and Nick Hoffman battled for third, with Hoffman holding the advantage at the halfway point. Shirley dominated the entire 10-lap distance, with Gundaker finishing second. Hoffman ran third, with Feger finishing fourth to transfer to the feature.

Charging around the top side, outside pole sitter Frank Heckenast Jr. took an early lead, with Shane Clanton and Rick Eckert battling for second. The top-three cars distanced themselves from the field at the halfway mark, with Heckenast holding a comfortable lead. Heckenast won the heat, with Eckert and Clanton rounding out the podium. Kent Robinson grabbed the fourth and final transfer spot.

Polesitter Shannon Babb shot to the lead at the drop of the green flag, with second-starting Chase Junghans in tow. With the top-two cars maintaining position, it was Mike Marlar who was on the move, advancing from sixth to run third on the fifth lap. Babb stretched his lead in the final laps, holding nearly a half straightaway lead over Junghans at the finish. Chris Madden improved from seventh to grab the fourth and final transfer spot.

Polesitter Devin Moran edged ahead of fellow front-row starter Brandon Sheppard to take an early lead, with a yellow flag waving on the first lap when Mason Oberkramer spun in the bottom of turns one and two. Moran held his lead as the race went back green, with Jeff Herzog slipping from third to fifth on the fourth circuit. A second yellow flag flew on lap five when Steven Roberts spun. The Georgia driver drew another caution on the ensuing restart when he spun again on the backstretch. With Sheppard charging to run side-by-side with Moran, another yellow flag waved on lap eight when Paul Stubber spun in turns one and two. Moran won the heat, with Sheppard holding off a last-lap challenge from Tim Manville to run second.

Fresh off of his Friday victory at Terre Haute (Ind.) Action Track, Devin Moran of Dresden, Ohio, clocked the overall fast time for Saturday’s co-sanctioned program, tripping the clock at 12.709 seconds. Moran will start on the pole of the first of four heat races. Setting quick time in his respective time trial group, Allen Murray of San Antonio, Texas, will start on the pole of the third heat race. Kenny Rumble of Arnold, Mo., was penalized for taking extra laps during his time trial session and will be forced to start on the tail of his heat race.

The World of Outlaws Craftsman Late Model Series and DIRTcar Summer Nationals tour collide again on Saturday night at Federated Raceway at I-55 in Pevely, Mo. The 50-lap main event pays $10,000 to the winner.

The World of Outlaws tour makes its ninth-ever visit to I-55, with Babb among the most recent winners expected to be among the field Saturday night. Along with Sheppard, other former I-55 Summer Nationals winners include Brian Birkhofer of Muscatine, Iowa, Billy Moyer of Batesville, Ark., and Mike Marlar of Winfield, Tenn.

Saturday’s program will include time trials, hot laps, heat races, consolations and the 50-lap feature. Modifieds and pro modifieds will also be in action.