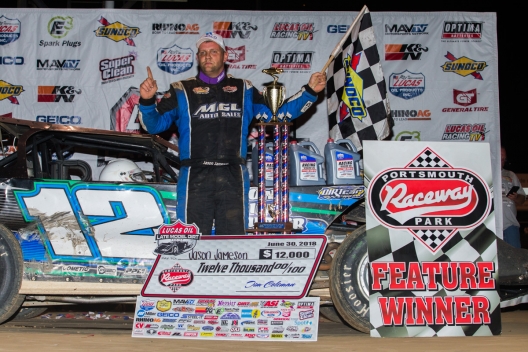 Jameson, 33, of Lawrenceburg, Ind., outran two of the sport’s biggest stars to win Saturday night’s Independence 50, first regaining the lead from Scott Bloomquist of Mooresburg, Tenn., on lap 32 and then keeping Josh Richards of Shinnston, W.Va., at bay for the final 16 circuits. The result was a $12,000 triumph that was by far the richest of his off-and-on, 13-year Dirt Late Model career.

It appeared that Jameson, who started from the pole position, might be resigned to falling short of his coveted first five-figure score after Bloomquist passed him for the lead on lap 13, but the driver of the Rattliff Racing Swartz car simply wasn’t going to be denied. Showing some true grit, Jameson summoned the speed to sail around the outside of Bloomquist and move back in front 19 circuits later and he never was headed after that.

“He was driving the wheels off that thing,” Jameson said of Bloomquist, who hustled forward from the sixth starting spot to lead laps 13-31. “He made me get up and drive a little harder.”

Jameson — a racer who unabashedly embraces his reputation as a hard-charging “gasser” — experienced some anxious moments late in the feature when he nearly pushed the envelope too far while running the 3/8-mile oval’s extreme outside. But he maintained a short-but-steady edge over Richards’s Best Performance Motorsports XR1 Rocket down the stretch to beat the defending Lucas Oil Series champion by 0.637 of a second.

Bloomquist, whose appearance at Portsmouth came after a Friday consultation with a shoulder specialist brought him the news that he wouldn’t need the season-ending rotator cuff surgery that he was expecting, settled for a third-place finish in his Sweet-Bloomquist mount. Veteran Rod Conley of Wheelersburg, Ohio, placed fourth after starting from the outside pole in his family-owned XR1 Rocket and seventh-starter Tim McCreadie of Watertown, N.Y., overtook Michael Chilton of Salvisa, Ky., following a lap-40 restart to complete the top five in his Sweeteners Plus-backed Longhorn house car.

Jameson, who began driving for the Campbellsville, Ky.-based Rattliff Racing late in the 2016 season and became the operation’s primary chauffeur last year with Justin Rattliff backing off to run only a limited schedule, entered the program with momentum thanks to a solid month of June. He won a $5,000 Schaeffer’s Oil Iron-Man Series event the previous Saturday at his home track, Florence Speedway in Union, Ky., after having, among other outings, registered finishes of second on June 2 at Brownstown (Ind.) Speedway (Battle of the Bluegrass) and June 14 at Crossville (Tenn.) Speedway (Spring Nationals) and earned a heat win to start from the pole and lead the first eight laps of the June 9 Dream at Eldora Speedway in Rossburg, Ohio.

But winning a Lucas Oil show? Yes, it was a dream come true for the surging Jameson.

Portsmouth’s track conditions certainly turned out to Jameson’s liking, helping his cause. A very usable cushion developed and he seized on it.

“You could say that’s my cup of tea I guess, on the top,” said Jameson, who briefly slid back to third place behind Conley shortly after ceding the lead to Bloomquist. “I’ve never been much of a stop-and-go guy, but I can do it if I have to.”

Jameson used the outside lane to pass the 54-year-old Bloomquist for the lead on lap 32. Two laps later, though, a caution flag flew for the shredded left-rear tire on the car driven by Dennis Erb Jr. of Carpentersville, Ill., and on the restart Jameson came off the cushion momentarily after both Richards and Bloomquist shot ahead of him through turns one and two, forcing Jameson to split the two superstars exiting the second corner to remain in front.

“It’s nice racing with guys you know you can race real hard and clean,” Jameson said of the wild restart action, “and they’re gonna throw sliders and you can turn ‘em and they just return the favor.”

Jameson’s most anxious moment probably occurred with two laps remaining when he slid his car’s right-rear wheel over the cushion in turn two, throwing up a rooster tail of dust. He had just enough of a gap on Richards, however, to stay ahead to the finish.

“This thing picked up a vibration there at the end,” Jameson said. “The motor was getting hot and I was trying to run it in and keep my speed so I wouldn’t have to gouge on it real hard coming out … and it about put me in the wall down in one and two trying that.”

“He didn’t lift too much and got over the cushion,” Richards commented, “but he did a great job (maintaining control of his car).

“I was trying,” he added. “After about four or five laps the tires would get really hot and you’d hang quite a bit coming off of two and you had to back-pedal and roll through there, so it was just a little free.”

For Richards, 30, claiming runner-up money was a positive development for his hopes of repeating as Lucas Oil champion. That possibility seemed to be flickering as he struggled through the spring and lost ground in the points standings, but Portsmouth marked his second consecutive podium finish.

Bloomquist, meanwhile, conceded that Jameson simply was the class of the evening’s field.

“He was just a little better than we were tonight,” Bloomquist said. “He could run the cushion a little bit harder. It’s a little bit rough on us to run that rough top. We ran it for awhile and again … it’s just a little bit painful (due to a left shoulder that his doctor said is hampering him due to arthritis). We decided to move down and try to maintain and keep up, maybe see if I could get something working in the middle or the bottom, but the top was just too dominant.

“But we had a decent points night, we’re just happy to be here and we’re gonna keep digging.”

Three caution flags slowed the A-main. The first came on lap 12 when Darrell Lanigan of Union, Ky. — the driver who formerly employed Jameson as his crew chief and fielded a car for him — fell off the pace with nose damage. Erb triggered the lap-34 caution while a final yellow flag was needed on lap 40 for points leader Jonathan Davenport of Blairsville, Ga., who slowed with a right-rear flat tire and went on to finish 17th.