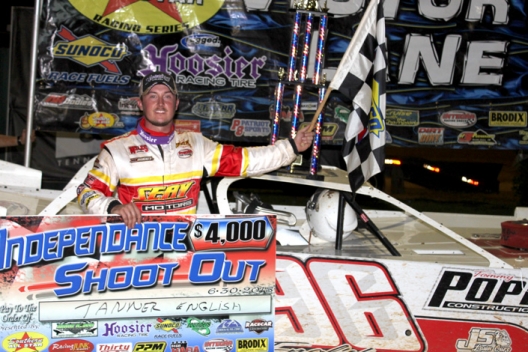 Robert Holman/DirtonDirt.com
Tanner English won his second career Southern All Star race.
What won the race: Tanner English of Benton, Ky., went to the outside of Brad Skinner as the pair approached lapped traffic with six laps remaining and completed the pass two laps later to lead the final four circuits at Duck River Raceway Park on Saturday. English topped Skinner and Scott Cook to win his second straight Southern All Stars race at DRRP, earning $4,000 in the Independence Shootout.
Quotable: “Brad, he was really good there on the bottom and it didn’t seem like he was making many mistakes,” winner Tanner English said. “Lapped cars were messing him up a little bit. I just saw he was slowing down a little bit. I don’t know if his tires were going away or what. Once I caught him, I knew I had to do something with him because he wasn’t coming off the bottom. That’s when I saw the laps (remaining) and I decided I better go for it and it just worked out.”
Key notes: After wrestling the lead away from Brad Skinner, Tanner English pulled away to win by 1.890 seconds. … His other SAS victory came earlier this season at Duck River. … English became just the third driver with multiple Southern All Star wins at Duck River, joining Dale McDowell of Chickamauga, Ga., and Mark Mears of Decatur, Ala. McDowell has five, Mears three. … Sixteen cars were running at the end of the 50-lapper, with 12 still on lead lap. … Series points leader Jay Scott of Fayetteville, Tenn.., started fourth and slid back to eighth early before rallying to finish fifth. … Skinner, of Spring Hill, Tenn., was racing with a heavy heart following the death of his father on Wednesday. His dad, Phillip Nolen Skinner, was buried Saturday afternoon. An emotional Skinner dedicated his runner-up finish to his father. … Four-time series champion Riley Hickman was not a factor before retiring on lap 24. … Skinner tangled with a slower car while leading, resulting in a caution, but he was reinstated to the lead. … Mitch Thornton was banged up in a heat race collision with Mark Dodson. Thornton needed medical attention after apparently getting his arm caught in his steering wheel. He managed to start the feature. … There have been seven different winners in nine series races this season.
On the move: John Ownbey of Cleveland, Tenn., finished fourth after starting ninth.
Winner's sponsors: English’s Rocket Chassis is powered by a Jay Dickens Racing Engine and sponsored by Seay Motors, M&S Concrete, Pope Construction and Jackson Auto Auction.
Points chase: After Duck River, Jay Scott (756) of Fayetteville, Tenn., leads Mark Dodson (610), Ray McElhiney (594), Brad Skinner (506) and Eric Hickerson (494).
Car count: 24
Fast qualifier: Tanner English
Time: 12.605 seconds
Polesitter: Brad Skinner
Consolation race winners: David Brannon, Riley Hickman
Next series race: August 4, Blue Ridge Motorsports Park (Blue Ridge, GA) $4,000
Editor's note: Results and race details are unofficial.