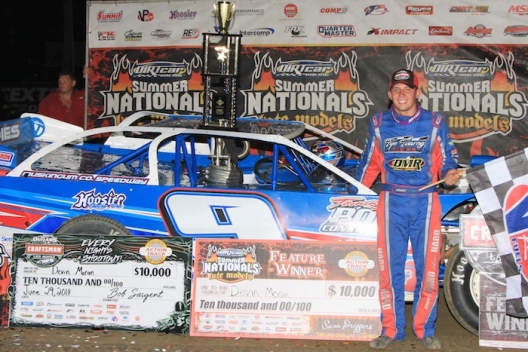 TERRE HAUTE, Ind. (June 29) — Just when it appeared that Shannon Babb of Moweaqua, Ill., was set to tie the DIRTcar Summer Nationals all-time win record, Devin Moran of Dresden, Ohio, had other plans.

Gaining momentum from a late-race restart, Moran powered down the backstretch and slid ahead of Babb out of turn four to take the lead on lap 25 of 30. Leading the final circuits, Moran scored a $10,000 World of Outlaws Craftsman Late Model Series-Summer Nationals victory in Friday’s co-sanctioned event at Terre Haute Action Track.

“I thought it was going to be Lernerville all over again,” Moran said of the race’s final caution. “That happened to us last week too when we finally caught Chris (Madden) and the caution came out. But I wasn’t as good as him last weekend. We just had the car dialed in (tonight).

“Shannon (Babb) messed up coming off of (turn) two after that restart. I was side-by-side with him going into (turn) three and I knew that was my shot because the air was so important here. I just drove it all the way to the fence and hit the traction and tried to stay up there the rest of the race.”

Rolling off from the third starting spot, Moran shot ahead of outside pole sitter Chris Madden of Gray Court, S.C., to take the second-place spot on the opening lap. Racing side-by-side with Babb, Moran gained the lead the third lap, only to fall back to second one circuit later.

While Babb set a blistering pace out front, Moran was able to maintain his position, closing the gap between himself and the race leader as the pair worked their way through late-race lapped traffic. Moran used the race’s final caution to his advantage, outdueling Babb for his third career World of Outlaws victory and first-ever Summer Nationals triumph.

“I was a little nervous because we went out there for the feature and it was actually more brown than what it was all night,” said Moran, who recorded his sixth top-five finish in his last seven WoO starts. “I didn’t know what was going to end up happening. I thought I might have been too tight. But the XR1 Rocket was pretty good.”

“As long as we was running green-flag laps I felt like we was pretty decent,” Babb said. “I was tight down in (turns) one and two. On the restart I didn’t know … I figured if I went high into (turn) one that I was going to open the door and thought I’d get slid in one. I kind of took the momentum line through there but it killed my speed down the back straightaway and he was able to get a better run on me … I feel like we had a really good car tonight. Real happy with second.”

With his second-place finish, Babb secured his spot at the top of the Summer Nationals standings. But it was also a good points night for Marlar, who entered the weekend just 16 points behind Madden in the World of Outlaws standings and closed to within 10 markers of the lead.

“I started a little too far back and it was a short race,” Marlar said. “I had a good car, just had some bugs there qualifying and needed to get that figured out. It was a good racetrack. It’s hard to race on big racetracks like this a lot of times. Twelfth to third in a 30-lapper, pretty good track.”

Notes: The race was slowed by two cautions. … The first yellow flag waved on the second lap when Rusty Schlenk spun in turn four, collecting Chuck Hummer. … Fourth-running Brandon Sheppard drew a caution on lap 24 when he slowed off the pace. With steam coming from his Rocket Chassis house car, he did not return and fell 80 points behind Madden in the standings. … The Outlaws tour made its first-ever visit to Terre Haute; last year's planned Summer Nationals Challenge event was rained out.

Polesitter Chris Madden charged to the lead when the green flag waved, with David Breazeale and Mike Marlar battling for third on the opening lap. Second-running Brandon Sheppard began closing the gap between himself and Madden on the fifth lap but was never able to seriously challenge for the lead. Madden won the heat race, with Sheppard finishing second. Breazeale rounded out the podium in third.

With the front-row starters racing side-by-side on the first lap, Shannon Babb pulled ahead of Shane Clanton down the backstretch to take the lead on the second circuit. Babb maintained a solid lead at the halfway mark, going on to win the second heat. Clanton ran second, with Rick Eckert finishing third.

Polesitter Devin Moran shot to the front of the field at the drop of the green flag as Brian Shirley and Kent Robinson battled for second. With the top-two cars pulling away from the field at the halfway mark, Shirley charged around the high side, closing in on Moran. With Robinson running a solid third, Rusty Schlenk and Chris Ferguson battled side-by-side for fourth late-race. Pulling away in the final laps, Moran won the heat, with Shirley and Robinson rounding out the podium.

The Outlaws tour makes its first-ever visit to half-mile Terre Haute oval, while Summer Nationals competitors return for the first time since 2014. Billy Moyer of Batesville, Ark., picked up the Hell Tour victory at Terre Haute four years ago, but after suffering heavy damgage to his car in Thursday's Summer Nationals event at La Salle (Ill.) Speedway, the Hall of Famer is not on hand for Friday's show.

Fresh off of his Firecracker 100 victory at Lernerville Speedway in Sarver, Pa., Chris Madden of Gray Court, S.C., leads the WoO tour heading into the weekend. Shannon Babb of Moweaqua, Ill., tops the Summer Nationals points standings, while Brian Shirley of Chatham, Ill., was the winner of Thursday’s tour stop at La Salle.

Friday’s program will include hot laps, time trials, heat races and the 30-lap feature. All cars will start the main event and modifieds will also be in action. Terre Haute does not host Late Models on a regular basis.