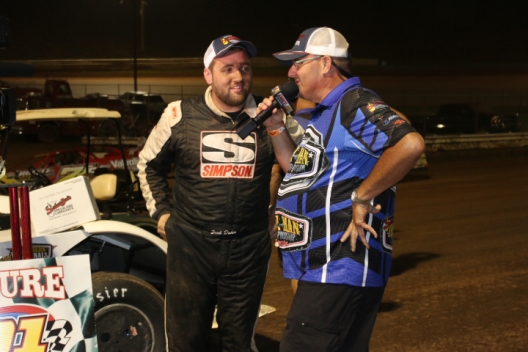 SITKA, Ky.  — Zack Dohm finished Friday’s Schaeffer’s Iron-Man Series feature at 201 Speedway the same way he started it — patiently. After starting fourth, Dohm of Cross Lanes, W.Va., grabbed the second spot from polesitter Jeremy Berwanger on lap two and then stalked early leader R.J. Conley of Wheelersburg, Ohio, for eight laps before finally taking the lead and driving away for a $10,000 victory.

Dohm, who said he opted for a softer right front tire, didn’t push the issue once he got out front. Instead, he stayed just far enough ahead not to be challenged. Dohm kept eyeing brother Nick Dohm’s hand signals, waiting for a challenger, but they never came.

“Nick was showing me I had a real big lead,” said Dohm. “We went a little soft on right front tire. You’ve got three tires you can run. I wasn’t real sure about the harder choice. We went with a hard right rear and a pretty soft left rear and right front and he was showing me I had a big lead, so I just tried to put it on cruise control and maybe if anybody got close I’d still have a little bit of tire left. But (Nick’s) hands just kept getting farther and farther apart.”

Once Dohm zipped by Berwanger, he quickly set his sights on Conley, who had jumped into the lead on the opening lap from his second starting position. Dohm had little trouble working the bottom of the track, but still took his time getting around Conley. He caught the leader on lap eight and pulled alongside. The two ran door-to-door for two circuits before Dohm cleared him and began to pull away.

“The car was awesome tonight. I can’t thank Audie Swartz (enough). He builds an awesome race car … best car I ever drove in my life,” said the winner. “Jackie Boggs … I’d be lost without him. He helps me a lot. We kinda do our own deal, but Jackie’s taught me more about racing since I’ve been racing than anybody has.

“I couldn’t do nothing without my brother. He takes the short end if the stick on the deal, as far as me and my dad. He probably only gets to race eight to 15 times a year. I got a newborn son  … I wish they were here. But, I couldn’t race if it wasn’t for Nick, he does all the work. I’m just super appreciative of Nick. It was a good night … good start to the weekend.”

Conley was pleased as well, despite giving up the lead, and potentially his fourth triumph of the season. He had to battle Berwanger early and then hold off a fast-closing Wells to hang on to the runner-up spot.

“I’d like to congratulate Zach. His car was real maneuverable,” said R.J. Conley. “We got in traffic and my car just wouldn’t turn down like his. He could turn down under that lapped traffic and I couldn’t turn mine down. It just said nope I’m not doing it. Me and Jeremy (Berwanger) had a real good race. We was side by side for I don’t know how many laps.”

The race for second was arguably the best on the track, with the exception of Wells, who charged through the field after a poor qualifying effort and a lackluster run in his heat left him mired deep in the field to start the main event.

“It definitely feels good after the way we started the night,” Wells said of his podium finish. “That seems to be the story of the year. We just can’t get a lap down qualifying so we get ourselves behind and we’ve got to dig out of a hole. We’re definitely pleased with a third-place finish tonight because after that heat race, things weren’t looking good for us.

“We went back and changed everything on the car. We start out trying (different) stuff every night and I’ve gotta quit doing that. We end up on our base setup … going back there. We tuned on that a little bit tonight and we may have found something, I don’t know.”