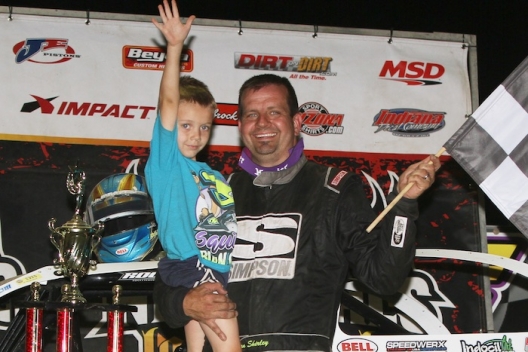 LA SALLE, Ill. (June 28) — It had been four years since Brian Shirley of Chatham, Ill., scored his last DIRTcar Summer Nationals victory. But the former series champion made a triumphant return to victory lane on Thursday night, earning a $5,000 payday at La Salle Speedway.

Starting outside the third row, Shirley powered to second in the early running, closing in on race leader Shannon Babb of Moweaqua, Ill., on lap 12. With the pair racing side-by-side, Babb fought back Shirley’s challenges through the halfway mark. But Shirley’s charge wouldn’t be slowed.

Pulling ahead of Babb down the backstretch on lap 21 of 41, Shirley led the remaining distance, outrunning Dennis Erb Jr. of Carpentersville, Ill., for his 16th career Summer Nationals victory and first tour win since July 16, 2014.

“It feels real good,” Shirley said after the race. “It was a little emotional for me tonight because my kid and my wife got to come. That was the first time my kid’s ever seen me race. I’d definitely like to dedicate this to Jason Johnson. I know there’s a lot of hearts hurting in the sprint car world. It’s still a racing community. We’ve got to put our hearts out to them.”

Running in second, Shirley knew he was in the right position to challenge for the lead. When Babb nearly slipped over the cushion in turns one and two on the 12th circuit, Shirley was able to close the gap between himself and the race leader, patiently waiting for the opportunity to strike. Momentum from a mid-race caution worked to his advantage as he shot ahead of Babb.

“I knew we was in the right catbird seat,” Shirley said. “The other night at (Spoon River Speedway), it was just hard racing. Shannon, he races hard. I race hard. It’s all bygones be bygones when we show up here today. That was the last thing on my mind was anything about him. He’s a great race car driver. All in all, just happy for my team.”

“We had a good car,” Erb said. “After the heat race we dialed it in a little bit better. The racetrack came to us and we was able to advance a lot. The car felt good, rolled out through the middle. I kind of put it all over, where we needed to. We had a good piece tonight.”

Charging around the high side, Babb attempted to reel in Shirley and Erb in the final circuits. But late-race cautions had already slowed his momentum. With his podium finish, Babb maintains the series points lead heading into Friday’s event at Terre Haute (Ind.) Action Track.

“I needed to be a lot better than what I was,” Babb said. “I didn’t feel good all night, so I just kind of went with what we’ve been going with and it wasn’t no good tonight. Brian was definitely the dominant car. He just drove off from us, really looked good. We need to make a few adjustments but its over now and we’re happy with a third-place finish. We were just holding on.”

Polesitter Brian Diveley led first two circuits, falling to fellow front-row starter Allen Weisser on lap three. Gaining momentum from a lap-six restart, seventh-starting Chase Junghans moved into second as the race went back green, with Rusty Schlenk losing a transfer position as he fell back to fourth. With Weisser and Junghans maintaining their positions, Nick Hoffman pulled ahead in a battle for third on lap nine. Weisser won the consolation, with Junghans taking the final feature transfer spot.

Polesitter Tanner English took an early lead, with third-starting Jason Feger edging ahead at the line to lead the fourth lap. With Feger holding a solid lead at the halfway mark, Dennis Erb Jr. attempted to reel in Ryan Unzicker for third. Feger pulled away in the final laps to win the heat, with English finishing second and Unzicker running third.

Polesitter Tyler Erb led the first three laps, with fellow front-row starter Shannon Babb powering around the top side to take the lead on lap four. Distancing themselves from the field, the pair raced side-by-side mid-race, as Rusty Schlenk and Gordy Gundaker battled for third. With Schlenk jumping the cushion in turns one and two late-race, Gundaker and Bob Gardner were able to pull ahead. Babb held off Erb to win the heat, with Gundaker rounding out the podium in third.

Polesitter Billy Moyer shot to the lead at the drop of the green flag, with a yellow flag waving on the second circuit when Scott Schmitt slowed in turn four, collecting Kevin Weaver. Both drivers were forced to retire to the pits with damage to their cars. Moyer began stretching his lead on the restart, with Brian Shirley challenging Frank Heckenast Jr. for the second-place spot. Shirley slipped under Heckenast to take second at the halfway mark but was unable to reel in Moyer. The Hall of Famer won the heat race, with Shirley, Heckenast, and Michael Kloos taking transfer spots.

With the front-row starters racing side-by-side out of turn four, polesitter Brent Larson edged ahead of Mike Mataragas to take an early lead. A yellow flag waved on lap two when Chris Simpson and Kolby Vandenbergh tangled in turns one and two. Simpson headed to the pits but Vandebergh was able to continue. Larson held his lead on the restart, with Bobby Pierce overtaking Mataragas for the second-place spot. Slipping under Larson as the pair made contact in turns one and two, Pierce took the lead on lap six. Powering back ahead of Pierce down the backstretch, Larson nosed ahead at the line to win the heat.

Making his first DIRTcar Summer Nationals start of the season, Brent Larson of Lake Elmo, Minn., recorded Thursday’s over all fast time, tripping the clock at 13.389 seconds. Larson will start on the pole of the evening's first heat race. As the fastest qualifier in his respective time trial group, Tyler Erb of New Waverly, Texas, will start on the pole of the third heat race.

After Tuesday’s tour stop at Charleston (Ill.) Speedway was rained out, the DIRTcar Summer Nationals get back under way on Thursday with a $5,000-to-win program at La Salle (Ill.) Speedway. Series competitors return to the quarter-mile high-banked oval for the 12th time in tour history, the first since 2016.

Shannon Babb of Moweaqua, Ill., heads to La Salle fresh off a pair of series victories at Tri-State Speedway in Haubstadt, Ind., and Spoon River Speedway in Banner, Ill. While his most recent La Salle Summer Nationals victory came in 2011, Babb won the opening night of the Lucas Oil MLRA-sanctioned Thaw Brawl back in March.

Recent Summer Nationals winners at La Salle include Bobby Pierce of Oakwood, Ill., Chris Simpson of Oxford, Iowa, and Brian Birkhofer of Muscatine, Iowa. Pierce and Simpson are expected to be on hand Thursday night. Simpson was also a Thaw Brawl winner earlier this season.

Thursday’s show will include hot laps, time trials, heat races, consolations (if needed) and the 41-lap main event. A lap was added to the feature distance in memory of the late sprint car driver Jason Johnson, who piloted a No. 41. Modifieds will also be in action and the program will include a fireworks show.