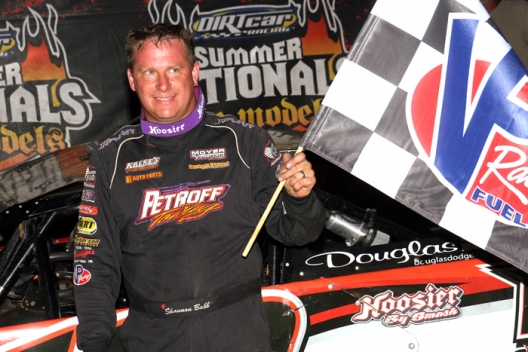 Series points leader Shannon Babb of Moweaqua, Ill., turned back a stiff challenge from Brian Shirley on a late restart to capture his tour-leading fifth victory of the season and 97th of his career with a $5,000 payday at the high-banked 3/8-mile oval.

Babb kept the polesitting Shirley winless on the tour as the Chatham, Ill., driver finished 0.406 seconds behind at the checkers in what was essentially a two-car race. Tyler Erb of New Waverly, Texas, was a distant third with Frank Heckenast Jr. of Frankfort, Ill., and Chase Junghans of Manhattan, Kan., rounding out the top five.

Afterwards, Babb and Shirley chalked the tight battle up to hard racing, but there were clearly a few bruised feelings when Shirley and Babb’s crew had a heated discussion about the outcome in the middle of the pits.

“I felt him get into me coming off (turn) two and I thought maybe he got in a push and got into me, no big deal,” Babb said. “But he stayed into me on the front straightaway … he put the squeeze on me pretty tough, more than I would’ve liked. It was good hard racing. We had a good finish and we’re happy to get out of here with a win.”

Shirley labeled the eight-lap duel “two guys trying to race hard for the lead” after he roared back into contention on the lap-32 restart of the 40-lapper.

And lean on him he did, especially on lap 37 when the frontrunners crossed under the flagstand in a near dead-heat. Babb inched back ahead over the final three laps to turn back Shirley’s charge.

Shirley, running a higher line with Babb in the middle of the track, led the first eight laps before Babb went by on the frontstretch to take command on the ninth lap. From there, Babb pulled out to a comfortable lead and had a cushion of three lapped cars on Shirley when he put Billy Moyer a lap down on lap 27. A lap-32 caution bunched the field and set up the late-race duel.

Babb questioned Shirley’s assertion that he made contact with his lap-nine pass.

“I didn’t think I had a problem getting by him. He messed down there in (turns) three and four like two or three laps in a row,” Babb said. “I got under him and drove in beside him going down the frontstraightaway. I turned in (to turn) one. I don’t know. I ran around the bottom and passed him, didn’t I?”

Babb never saw Shirley again until the late-race duel, but Babb said he had plenty left to fight off his challenger.

Shirley won’t argue with that after watching Babb win for the fifth time in nine series races.

“Babb’s found something that’s really stepped his game up, and I don’t feel like we’re slow by any means,” said Shirley, whose fast time at Spoon River was his fifth of the tour. “Out there when I was leading, I just needed to change my line a little bit, and obviously you could see, once I was able to change my line, we could run with Babb. You can’t take nothing away from Shannon Babb. He’s a helluva race car driver. We’re just going to battle hard and we’ll race tooth and nail and see what goes on.”

The 40-lapper was slowed by four cautions, two of them before a lap was completed.

It took three starts to get the race rolling The first start was called back when Timothy Culp slowed with a flat left-rear tire after contact with Erb, then Allen Weisser and Chuck Hummer tangled on the frontstretch on the next aborted start, requiring several minutes for track workers to pry them apart.

A lap-two yellow fell for Cole Swibold’s turn-three spin and the final yellow appeared on lap 32 for the lapped Jose Parga, who slowed after colliding with the fifth-running Bobby Pierce exiting turn four.

The series moves to Charleston (Ill.) Speedway on Tuesday for a $5,000-to-win event before taking a day off Wednesday. The June 27 date was vacated by Paducah (Ky.) International Raceway.

Notes: Babb’s victory wrapped up the $2,000 winner’s share of the Legends Week points fund. … Babb won his fourth series race at Spoon River. He previously won in 2005, ’07 and ’11. … Eleven drivers finished on the lead lap and 15 were running at the finish. … The June 26-July 1 Independence Week is sponsored by Allgaier Shocks & Midwest Speed Expo with another $5,000 points fund paying $2,000 to the week’s top points earner.

In the redraw among heat winners, Brian Shirley drew the pole with Shannon Babb alongside. Tyler Erb is set to start third. … Nick Hoffman’s team was replacing an engine in belt in hopes of making the feature after he dropped out of his heat race. … Bob Gardner broke a driveshaft in his heat but was making repair for the 40-lap feature. … Myles Moos was having engine problems but planned to try and start on the tail of the feature. ... Chase Junghans was a late arrival after his team’s transporter blew out a right-front tire near Litchfield, Ill.

Poleistter Shannon Babb edged away from Chase Junghans for a 10-lap victory. Fifth-starting Gordy Gundaker lost the third spot to Billy Drake on the last lap while Cole Swibold — despite lost ground in turn three at halfway — rounded out the top five. The lone caution appeared when Bob Gardner stopped on the backstretch to draw during the third lap; he was towed to the pits.

Polesitter Tyler Erb led all the way, pulling away from a tight battle for second between Frank Heckenast Jr. (running high) and Kolby Vandenbergh (running low). Vandenbergh snucky past Heckenast at the white flag to grab second while Brian Diveley and Rusty Schlenk rounded out the top five. Fourth-starting Nick Hoffman rolled to the inside of the frontstretch on the second lap, drawing a caution.

Fast qualifier Brian Shirley got a good start and led all the way in the 10-lapper, taking the checkers comfortably ahead of runner-up Timothy Culp. Last year's Spoon River winner Bobby Pierce was third while Jason Feger and Billy Moyer rounded out the top five. A.J. May retired on the third lap.

Brian Shirley of Chatham, Ill., posted his fifth fastest qualifying time of the tour with a 13.387-second lap on the 3/8-mile Spoon River oval.

Shirley will start on the pole of the first heat while the two other heat polesitters are Tyler Erb (13.390) of New Waverly, Texas, and series points leader Shannon Babb (13.444) of Moweaqua, Ill. seconds.

All drivers will transfer from their heats to the main event.

Spoon River Speedway is set to host the ninth leg of the month-long DIRTcar Summer Nationals in a race postponed Thursday by rain and wet conditions. The 3/8-mile oval has hosted 22 previous series events.

Babb is a three-time series winner at Spoon River, most recently in 2011, and other previous series winners at the track south of Peoria include Bobby Pierce, Dennis Erb Jr., Jason Feger, Ryan Unzicker, Billy Moyer and Billy Drake.

The evening’s Super Late Model program starts with 6 p.m. hot laps followed by group time trials. If the track draws 32 cars or more, there’ll be four heat races with four drivers transferring apiece followed by C- and B-mains. If there’s 31 cars or fewer, three heats will transfer five drivers apiece with a B-main setting the rest of the 22-car field.

Spoon River's event concludes the tour’s Legends Week, which carries a $5,000 points fund sponsored by DirtonDirt.com with $2,000 going to the top points earner.