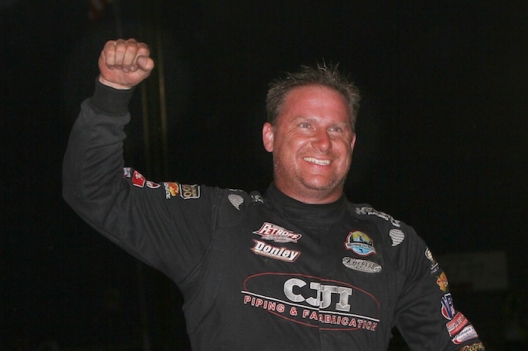 HAUBSTADT, Ind. — Tri-State Speedway was in hurry-up mode Sunday trying to beat approaching rain. It turns out hurry-up mode is Shannon Babb’s modus operandi when he visits one of his favorite tracks.

The Moweaqua, Ill., driver roared from from his fifth starting spot and quickly into a battle for the lead, stalking Tyler Erb for a dozen laps before making the winning pass for a 40-lap DIRTcar Summer Nationals victory at the high-banked quarter-mile oval.

Rain sprinkles that started with 10 laps remaining didn’t slow Babb as he withstood Erb’s late-race challenge for a $5,000 payday. The victory was the fourth in eight series races, the 96th of his series career and his sixth on the tour at Tri-State as he stretched his points lead in pursuit of his fifth series title.

“It was a ball. We were having a lot of fun,” Babb said. “There was tons of traffic and it could go either direction. When I was running second I was able to get slowed down and get turned in that traffic and get by, and everything worked out good for me to get the lead.”

Babb’s winning move came on the 14th lap when he pressured Erb down the backstretch. Erb dove into turn three and was forced to check up for the slower car of Paul Stubber, allowing Babb to zip underneath and take control.

Erb wasn’t in touch with Babb through the 40-lapper’s middle stages — most of Erb’s attention was centered on Brian Shirley, who had a back-and-forth battle of slide jobs as they battled for second on restarts — but Erb got rolling again late as Babb ran conservatively a few feet off the outside wall.

“I just knew I needed to move back to the top and try to get something going,” said Babb, who ran down low in the first half of the race. “I was just trying to stay out of the fence. It was hairy up there.”

Erb drew close enough to consider a last-lap slide job, but a slower car — again Stubber — didn’t give the runner-up enough racetrack to take a shot at Babb.

“Definitely the lapped car helped me, and I knew the slider was coming from Tyler. He puts 110 percent effort into it all the time,” Babb said.

Erb would’ve like to had more racing room but consciously decided not to throw a Hail Maryl.

“I hated to see that lapped car there that last corner. I really turned it on that last five, six, seven laps, and ran Babb back down,” Erb said. “I was sizing it up pretty good. … I was contemplating jumping that infield tire and (passing) Stubber, but I just gotta make smarter decisions and have more consistent results, and that’s what we’re shooting for.

“There’s a lot of woulda, coulda, shoulda … I think they definitely knew we were there. And it was a super, super fun race, and good job to Babb and (Shirley), we had an awesome race there. I’ll just try again next year I guess.”

Babb was grateful track and series officials helped drivers beat the rain condensing the preliminary program to get the main event on the track early.

“I gotta say thanks a ton to (promoter) Tom Helfrich (for) skipping the heat races and getting right to the feature,” Babb said. “We had rain coming and everybody’s been traveling a lot and they wanted to get it done. So thanks a lot to him. And they prepared the track perfect.”

Three cautions slowed the feature, the first for a turn-two incident involving Timothy Culp and Matt Santel on the 21st lap and again on the 24th lap when polesitter Tanner English slowed with problems underneath the car.

Three-time series champion Bobby Pierce, who pitted on lap 24, and Paul Stubber drew the final yellow on the 28th lap in turn three. Pierce’s car was towed to the pits.

The series moves to Spoon River Speedway in Banner, Ill., for a $5,000-to-win event on Monday evening. The race, originally scheduled for June 21, was postponed by wet grounds and a wet forecast.

Notes: Babb’s first three series victories in 2018 came in consecutive fashion … His previous Tri-State victories came in 1999, ’01, ’11, ’13 and ’15. … Tri-State was the site of his first-ever series victory in the 1999 opener. … Runner-up Tyler Erb and Chase Junghans of Manhattan, Kan., came to Haubstadt after a three-race weekend in Sarver, Pa., for Lernerville Speedway’s Firecracker 100 on the World of Outlaws Craftsman Late Model Series. Erb finished third for a $7,000 payday in the race won by Chris Madden. … Nine drivers completed 40 laps and 14 were running at the finish. … Rain continued to fall on the track after the Late Model feature. Pack vehicles worked the surface for a half hour or so hoping to get the modified portion of the program completed, but the event was eventually called.

Last year’s Tri-State winner, Tyler Erb of New Waverly, Texas, was the quickest of 23 qualifiers with a 14.843-second lap on the quarter-mile oval. He’ll be scheduled to start on the pole of a heat along with Tanner English of Benton, Ky., and Timothy Culp of Prattsville, Ark. … With rain moving toward the track from southern Illinois, series director Sam Driggers told drivers he may scrap heat races and straight the 23 cars by time. … English made another start in the Benton, Ill.-based car of Steve Lampley. … Modified hot-shoe Trent Young of Crofton, Ky., entered in a Scott Clippinger Racing car. … The night’s action got off to a slow start as it took extra time to get the haulers situated in the pits from the long line that formed among competitors. … Modifieds are the only other division in action with 37 entries.

The month-long Summer Nationals head to the high-banked quarter-mile Tri-State Speedway for the second of four scheduled tour races in Indiana. The Tom Helfrich-promoted oval is set to host the tour for the 23rd time.

The tour’s all-time winningest drivers are leading the points chase with three-race winner Shannon Babb (95 career victories) of Moweaqua, Ill., and two-race winner Billy Moyer (98) of Batesville, Ark., racing toward the 100-victory mark on the tour founded by the late Bob Memmer in the 1980s.

Babb has a 23-point lead on Moyer, who won Saturday at Fairbury (Ill.) American Legion Speedway, while Brian Shirley of Chatham, Ill., stands 64 points behind Babb. Babb and Moyer are former winners at Haubstadt and other expected former series winners are Bobby Pierce and Dennis Erb Jr.

The evening’s Super Late Model program starts with hot laps followed by group time trials broken down by heat races. If the track draws 32 cars or more, there’ll be four heat races with four drivers transferring apiece followed by C- and B-mains. If there’s 31 cars or fewer, three heats will transfer five drivers apiece with a B-main setting the rest of the 22-car field.

Tri-State’s event is part of the tour’s Legends Week, which lasts through Monday’s makeup race at Spoon River and carries a $5,000 points fund sponsored by DirtonDirt.com with $2,000 going to the top points earner.