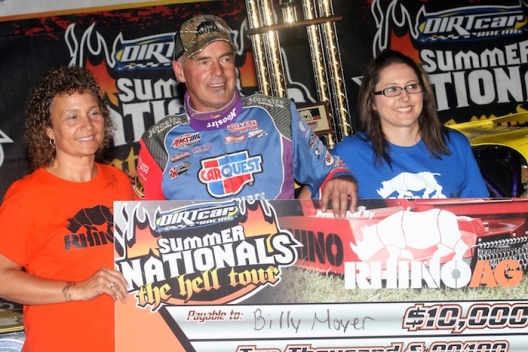 FAIRBURY, Ill. — The drumbeat for Billy Moyer’s march to 100 is getting louder and louder.

The 60-year-old Hall of Famer and six-time series champion clicked off his series-leading 98th career series victory Saturday at Fairbury (Ill.) American Legion Speedway, using a high-side charge to rally from his ninth starting spot for a $10,000 payday on the seventh leg of this year’s month-long tour.

Moyer, who has made Fairbury a big part of his Summer Nationals success with eight victories at the quarter-mile oval, outdueled Shannon Babb in the second half of the race, taking the lead for good on the 35th lap stay in touch with the points-leading Babb.

“The last few times I’ve been here, I haven’t run like I wanted to, so we just kind took a shot in the dark — from the hip or whatever — on a setup for the main event,” Moyer said. “We changed some stuff around and it’s pretty neutral where I could run anywhere on the track really.”

Polesitter Bobby Pierce was outrunning Babb, Moyer and everyone else in the first half of the race, but he coasted to the infield on the 28th lap after his fan went through his radiator. The three-time tour champion’s Dunn Benson team slowly pushed the car away while Babb inherited the lead.

Restarting fourth, Moyer saw that Pierce was making his car go around the high side.

“I knew the track was there, and I was just kind of biding my time waiting for the right time to get out there and try it,” the winner said.

He pulled the trigger on the lap-28 restart, jumping to the high side to immediately begin pressuring Babb, who had been battling Dennis Erb Jr. on the low side in their pursuit of Pierce. Moyer blew past on lap 30, but Babb gathered up his No. 18 go back again on lap 31.

But Moyer’s high-side charge wasn’t over as he flew back past his friendly series rival exiting turn four on the 35th lap and never gave up the lead. He took the checkers 1.231 seconds ahead of Shirley, who posted his best series finish of the season.

“I remember coming back here way back when and (fans) were sitting almost all the way around this thing,” said Moyer, who also has six Prairie Dirt Classic victories at FALS. "It just seemed like the atmosphere, they’ve just go great race fans around here that love their dirt track and come and support it. … The people on the back straightaway raising cane and stuff, it’s just always been fun to come up here. I didn’t know how many I won. This place has always been good to me.”

After series drivers faced rugged conditions the previous night at Tri-City Speedway in Granite City, Ill., the frontrunners were glad for a smoother night on a track that’s been soaked by rain (an enormous pile of mud in the infield was signal of the work done in preparation for the event).

“I’m just happy to put in a solid night after a couple of frustrating nights,” Shirley said. “I was a little disappointed last night. I felt like we had the car to beat and we just folded the right-front nose in there. … But all t’ in all, I’m still pumped, and know we’ve got a fast hot rod.”

Babb, who had to unload a backup car after a wreck at Tri-City, wasn’t disappointed he couldn’t duplicated his flag-to-flag Summer Nationals victory from 2017.

“The track was real racy tonight and I wasn’t able to hold off Billy and Brian there,” he said.  “I was kind of set up for the middle, maybe a little bit too snug to run the top. All in all, we’re really happy to get out of here with a third place.”

Besides the lap-27 caution for Pierce, a lap-19 caution appeared for debris and a lap-43 yellow came out for a slowing Mike Spatola.

The tour departs the state of Illinois for just the second time Sunday with a $5,000-to-win event at Haubstadt, Ind. Instead of Monday’s scheduled off-day, the tour will continue at Spoon River Speedway in Banner, Ill., for the makeup of Thursday’s postponed $5,000-to-win event.

Notes: Moyer notched his second series victory of the season; he won Sunday at Plymouth (Ind.) Speedway. … Scott Schmitt of Tonica, Ill., started outside the front row but was never a factor. He dropped back to 10th after five laps and ended up 13th. … Bob Gardner took a provisional without taking a competitive lap in prelims. A broken oil pump belt in hot laps caused him to miss time trials, then he broke a driveshaft rolling out for his heat race. He had a flat midway through the feature … Brent McKinnon’s car bounded high in the air in a turn-four fracas in the consolation race; he climbed from the car apparently unhurt. … Paul Stubber had a surprise visitor during the consolation when a portion of Rusty Schlenk’s spoiler landed in his cockpit just before a restart; he pulled to the infield to hand it to a track worker. … During feature parade laps, the 22-car starting field carried U.S. flags raised high out of the driver’s window. … The event drew 32 cars, nine fewer than last year on the DIRTcar tour. … Fairbury’s biggest race of the season is July 27-28 for the $30,000-to-win Prairie Dirt Classic on the World of Outlaws Craftsman Late Model Series.

Mike Spatola edged away from a side-by-side battle with polesitter Shannon Babb to lead nine laps, but Babb roared under Spatola on the final lap to win. Spatola settled for second with fifth-starting Allen Weisser in the third spot ahead of Frank Heckenast Jr., the final transferree. Bob Gardner pulled out for the race but stopped on the frontstretch during pace laps and was pushed to the pits.

Outside front-row starter Bobby Pierce led the caution-free third heat for an easy 10-lap victory. Polesitter Brian Shirley was 2.113 seconds behind as the runner-up while Jason Feger and Kyle Bronson got the other two transfer spots. First-race Summer Nationals winner Billy Drake slowed on the final lap after running sixth in the second half of the race.

Scott Schmitt edged ahead of polesitter Ryan Unzicker from outside the front row and cruised to a 10-lap victory. Chris Simpson dropped Unzicker to third on the fourth lap and Gordy Gundaker droopped him to fourth on lap nine. Unzicker settled for the final transfer spot. Last week's feature winner Jeff Curl retired at halfway.

Fourth-starting Dennis Erb Jr. went under fellow second-row starter Billy Moyer on the fourth lap and cruised the rest of the 10-lapper. Moyer blitzed front-row starters Kevin Weaver and Timothy Culp, on the first lap, but Weaver was able to get back around Moyer exiting turn four on the final lap. Culp got the final transfer spot in the caution-free prelim.

Brian Shirley of Chatham, Ill., topped 32 qualifiers with a 12.610-second lap at the quarter-mile Fairbury oval. It’s his fourth quick time on the tour.

A rain-hampered week of the DIRTcar Summer Nationals tries to regain its rhythm Saturday at Fairbury with what would be the second of back-to-back series events for the first time in seven days.

Ryan Unzicker of El Paso, Ill., the 2013 series winner at Fairbury, will be gunning for his second straight series victory after his $10,000 payday Friday at Tri-City Speedway in Granite City, Ill., which  fought through a wet week and rugged conditions to host the first completed series event since Sunday.

Three-time race winner Shannon Babb of Moweaqua, Ill., who salvaged a fourth-place finish at Tri-City after being forced to a backup car because of a heat-race accident, maintains the series points lead in his chase for a fifth series title. Billy Moyer of Batesville, Ark., Brian Shirley of Chatham, Ill., Unzicker and Jason Feger of Bloomington, Ill., are Babb’s closest pursuers.

The Super Late Model program starts with 5:30 p.m. hot laps followed by group time trials broken down by heat races. If the track draws 32 cars or more, there’ll be four heat races with four drivers transferring apiece followed by C- and B-mains. If there’s 31 cars or fewer, three heats will transfer five drivers apiece with a B-main setting the rest of the 22-car field.

Fairbury is part of the tour’s Legends Week, which lasts through Monday’s makeup race at Spoon River and carries a $5,000 points fund sponsored by DirtonDirt.com with $2,000 going to the top points earner.