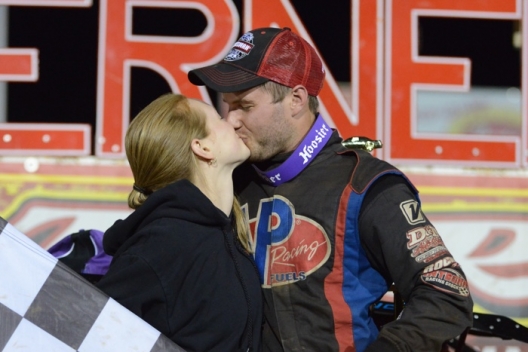 SARVER, Pa. (June 22) — Michael Norris jumped for joy and screamed in ecstasy when he climbed out of his car in victory lane after winning Friday night’s 30-lap Firecracker 100 preliminary feature at Lernerville Speedway.

Then, when the 26-year-old who lives just down the road from the track in Sarver, Pa., began talking on the public address system about his first-ever World of Outlaws Craftsman Late Model Series triumph, he could barely keep himself together.

“I’m trying not to cry,” Norris said, his voice cracking repeatedly as he teared up amid a raucous scene filled with family, friends and fans. “I can’t say no more.”

Indeed, Norris’s upset win left him at a loss for words. For a true hometown hero who grew up attending races at the 4/10-mile oval, capturing a national touring series event in his backyard after leading from flag-to-flag and turning back several strong challenges from WoO regular Devin Moran of Dresden, Ohio, was simply a dream come true.

“I don’t really have any words to describe it,” said Norris, who earned $6,000. “I was kind of getting emotional out there in victory lane.

“This one’s for my dad,” he added, referring to his father and crew chief Mike. “I used to sit in turn four with my grandma and watch him race.”

Norris was flawless in his march to victory, perching his family-owned XR1 Rocket car on the outside lip of the track and keeping it there for virtually the entire distance. Moran, 23, kept Norris in his sights from start-to-finish but settled for runner-up money in his Tye Twarog-owned XR1 Rocket, 0.713 of a second behind the winner.

Madden, Sheppard and Marlar — the top three drivers in the WoO points standings — hotly contested third place midway through the A-main and even ran three-wide on lap 20. But the close competition was derailed by Marlar’s lap-21 slip over turn four’s outside berm, causing him to fall to sixth and have to mount a late rally to get back into the top five.

Norris flirted with the same fate as Marlar as he pounded the top side of the track, but he managed to avoid disaster as he ran “harder than I ever have,” he said.

“The track was kind of weird,” commented Norris, who started from the pole position after setting fast time in the second qualifying group and winning a heat race. “I never felt good. In (turns) one and two, I could roll through there pretty good, but three and four — man, I felt like I was going over the hill at one point. It was just so dirty and spotty, you’d just kind of glide in there and wait to grab ahold of something.

“So I didn’t know how good I was,” he continued. “I knew the gap (between him and Moran) was opening and closing probably from lapped cars, and then I got to the b1 (Brent Larson of Lake Elmo, Minn.) and I could get to him but I couldn’t get by him. Then finally I slid him, and then I was like, ‘All right, let’s put the afterburners on and try to gap ‘em a little bit.’”

Norris built a race-high edge of over 2 seconds on Moran just before the lap-20 mark, but the advantage didn’t last. Moran cleared lapped cars and quickly erased his deficit, drawing within striking distance by lap 22.

“Once I got by them lapped cars I was just like, ‘Well, we just gotta go,’” said Moran, who made his second start in a new car he debuted the previous night. “I was just driving about as hard as I could without going over the hill.”

While Moran managed to nose underneath Norris in the corners on several occasions, he couldn’t pull off a pass.

“There was a cushion out of four and he could get that really good run right there,” Moran said of Norris. “I could get all the way beside him until that exit, and then he could just get that run off there. Just one of them deals where that played into his favor enough and he got the win tonight.

“I just found out tonight he was in my dad’s driving school so that’s pretty cool,” he added. “He’s a good race car driver and seems like a real nice kid so I’m happy for them guys. To win a big race in front of your home crowd at your home track, it’s an awesome feeling. I know all about that (from winning a Lucas Oil Late Model Dirt Series event at his family’s Muskingum County Speedway in Zanesville, Ohio).”

When Norris flashed under the checkered flag first, he had a hard time grasping his new reality of being a WoO winner.

“It felt, like, totally surreal,” said Norris, the defending Lernerville track champion who won for the fifth time in seven starts there this season. “I felt like I was in a dream.

“Never in a million years … you always hear about the hometown guys beating (the WoO regulars) and I just didn’t (think it was possible),” he added. “I went out there and didn’t really think about it. I just tried to attack the track, and the next thing I know I saw 2-to-go and I was like, ‘Wow, we have a legitimate shot to win at Outlaws race.’ I just tried to keep it under me. My (signal) stick guy was signaling me that someone was close, but I had no idea who it was. I just knew if I hit my lines and I kind of used that lapped car it would probably be real hard for (Moran) to get around me.”

Norris’s success earned him a pole starting spot in a heat race for Saturday’s Firecracker 100 finale. He knows he’ll face an even bigger challenge in the century grind.

“A hundred laps is a whole new game,” said Norris, I’m comfortable with 25 to 30 laps, that’s what I’m used to running. We probably still got a little homework to do (for the long distance) because these boys know what to do. I’m just a scrap hauler by trade, a weekend warrior. Just to hang with them is a dream come true.”

The feature’s lone caution flag flew on lap two when Chub Frank of Bear Lake, Pa., was nudged over the outside berm entering turn three and had his car’s steering break as he slid back on the track. He was clipped hard by Jared Miley of Pittsburgh, Pa., who slid over the bank and down the hill into a quagmire of mud. Both drivers’ cars were towed back to the pit area.

After a delay of just over a half-hour due to the light rain that fell as time trials were beginning, cars returned to the track at 7:43 p.m. to hot lap again. By 7:50 p.m., as practice was underway, a clearing in the sky suddenly bathed the speedway in brilliant sunshine.

Upon the completion of Thursday night’s Firecracker 100 opener, a dismal weather forecast for Friday created a sense of impending doom throughout the pit area. But rain did not fall as heavily as originally thought overnight and into the morning and conditions remained dry all through the afternoon, raising hopes that the second preliminary program could be contested. Light rain did hit around 5:30 p.m. and lasted about a half-hour, but packer trucks were on the track by 6:10 p.m. and the surface came around quickly. Hot laps began at 6:55 p.m. — a mere five minutes behind schedule — and, with a window of apparent dry weather through 10 p.m., officials were confident they could spin off the entire show quickly; however, another burst of rain struck at 7:10 p.m. just as the first cars were headed out for time trials, putting the show in a rain delay. … The 40-car field signed in for action is down one car from Thursday. Mike Pegher Jr. of Cranberry Twp., Pa., and Joshua Powell of Sarver, Pa., haven’t returned after suffering terminal engine trouble on Thursday while teenager Michael Lake of Uniontown, Pa., is a new entrant. … Dan Stone of Thompson, Pa., has pulled out his own trusty 2013-vintage Rocket No. 21d after his Super Deuce machine was sidelined by a broken engine during Thursday’s heat competition. … Representatives from Drug Free Sport, the organization the World Racing Group contracts to handle its drug testing program, were at the track on Friday to administer tests to 16 randomly selected drivers. One of the drivers selected for testing was three-time Firecracker 100 winner Scott Bloomquist of Mooresburg, Tenn., who was also randomly picked for testing two weeks ago during the Dream at Eldora Speedway in Rossburg, Ohio, but, after initially being unable to urinate when he reported to the reps, did not return to complete the process because he was injured in a fall at his trailer and went to a local emergency room.