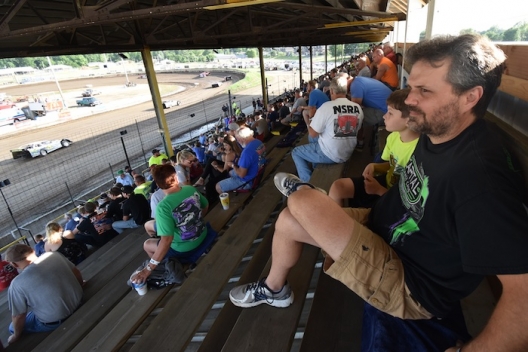 JACKSONVILLE, Ill. — Live updates from the sixth leg of the DIRTcar Summer Nationals at Jacksonville Speedway with an event capped by a $5,000-to-win Super Late Model feature (results unofficial):

A blustery storm with wind, rain and lightning that struck moments after Late Model heat races, raining out the remainder of the DIRTcar Summer Nationals program. A makeup date to complete the event is expected to be announced later; only series events completed before July 14 count as points races, but the race could be concluded after that as a non-points event.

Jacksonville marks the third rainout of the week. Tuesday’s event at Belle-Clair Speedway in Belleville, Ill., was halted after time trials, and Thursday’s scheduled event at Spoon River Speedway in Banner, Ill., was shifted to Monday, June 25, because of wet grounds and a wet forecast.

The series will look for drier weather on Friday at Tri-City Speedway in Granite City, Ill., which hosts a $10,000-to-win event that will become the sixth race on the tour that launched with 28 dates.

Frank Heckenast Jr. got the jump from outside the front row and cruised to a victory over polesitter Daniel Flessner as skies continued to darken to the west. Kolby Vandenberg for the third spot followed by Paul Stubber and Luke Goedert.

With storm clouds bearing down outside turns one and two, fast qualifier Billy Moyer cruised to an easy 10-lap victory. His son Billy Moyer Jr. was second, holding off Jason Feger. Ryan Unzicker and Gordy Gundaker had a tight battle for fourth in getting the final transfer spots in the caution-free prelim.

Timothy Culp slung around polesitter Bobby Pierce entering turn one on the first lap, but Pierce went by him at halfway and won the 10-lapper by a straightaway. Shannon Babb, who came alive on a lap-three restart to move up from sixth, finished third followed by Brian Shirley and Nick Hoffman. Rusty Schlenk slowed and gave up the fifth spot on lap seven. The only slowdown came when Michael Kloos spun in turn one while battling with Rusty Schlenk to draw a lap-three caution; Kloos was gingerly lifted from the driver's seat by the emergency crew, fitted with a temporary neck collar and lowered from a standing position onto a backboard. He was placed on a stretcher and into the track ambulance for a ride to the hospital.

He’ll start on the pole of the second heat race. Other top group qualifiers earning heat pole positions were Bobby Pierce (12.226) of Oakwood, Ill. and Daniel Flessner (12.651) of Roberts, Ill. The top five of each heat transfer to the main event.

Three-time and reigning series champion Bobby Pierce of Oakwood, Ill., now driving for North Carolina-based Dunn Benson Motorsports, is a two-time series winner at Jacksonville and is expected to compete while he appeals a DIRTcar suspension and monetary penalties after one of his tires used at Eldora Speedway’s Dream XXIV failed to meet manufacturer specs in postrace lab testing.

The Super Late Model program starts with hot laps followed by group time trials broken down by heat races. If the track draws 32 cars or more, there’ll be four heat races with four drivers transferring apiece followed by C- and B-mains. If there’s 31 cars or fewer, three heats will transfer five drivers apiece with a B-main setting the rest of the 22-car field.

Jacksonville opens DIRTcar Summer Nationals Legends Week, which covers about 750 miles for five races ending at Tri-State Speedway in Haubstadt, Ind., and carries a $5,000 points fund sponsored by DirtonDirt.com with $2,000 going to the top points earner.

Correction: Fixes Luke Goedert instead of Blaze Burwell throughout.