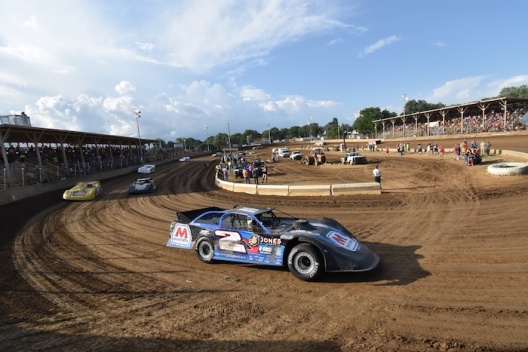 BELLEVILLE, Ill. — Live updates from the sixth leg of the DIRTcar Summer Nationals at the fifth-mile Belle-Clair Speedway for an event capped by a $5,000-to-win Super Late Model feature (results unofficial):

Blustery winds and rain — starting lightly and then getting heavier — blew in at the conclusion of the B-mod heats, washing out the event; no makeup date was immediately set. Late Model haulers were pulling out of the pits as the rain picked up.

Late Models had completed qualifying with Brian Shirley of Chatham, Ill., posting a 12.054-second lap to set fast time for the fourth time in six series events, but if the event is made up the program will start from scratch.

Tiny Belle-Clair Speedway brings the DIRTcar Summer Nationals back to action after the first scheduled day off of the grueling month-long tour.

Four-time series champion Shannon Babb of Moweaqua, Ill., who won three races in a row last week among the first five series events, tops the points of the $25,000 title chase so far with Billy Moyer of Batesville, Ark., and Brian Shirley of Chatham, Ill., in pursuit.

Besides those drivers and another half-dozen or so who have competed at all five events, three-time and reigning series champion Bobby Pierce of Oakwood, Ill., is expected to compete. Pierce has won the previous three series races at Belle-Clair and will be competing while he appeals a DIRTcar suspension and monetary penalties after one of his tires used at Eldora Speedway’s Dream XXIV failed to meet manufacturer specs in postrace lab testing.

The Super Late Model program starts with hot laps followed by group time trials broken down by three heat races transferring five drivers apiece; a B-main and provisionals will set the remainder of the 22-car field.