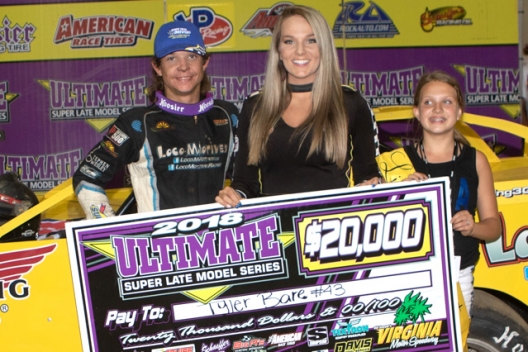 Taking the lead when a late flat tire derailed Tyler Millwood, the 24-year-old Rockbridge Baths, Va., driver led the final four laps of the 42nd annual USA 100 for a $20,000 victory on the Ultimate Southeast circuit.

After climbing atop his Bryan Klinedinst-owned car to celebrate, Bare hugged his father and veteran Late Model standout Booper Bare before talking about the five-figure payday for the Crate Late Model specialist.

“This is unbelievable. It’s about like winning the World 100, I feel like,” Bare said. “Especially the first Super (Late Model) race to ever win. It’s my eighth time out in the car … I can’t thank these guys enough.”

Bare took the checkers ahead of Georgia racers Brandon Overton of Evans and Dale McDowell of Chickamauga while fast qualifier and polesitter Russell Erwin of Beaverdam, Va., finished fourth. Zack Mitchell of Enoree, S.C., who led eight laps midway through the race, ended up fifth.

Millwood, who led 48 of the 60 feature laps, was among several drivers falling by the wayside with flat tires in the long-distance event on the half-mile oval. He ended up 13th in the 30-car field.

Bare, who started ninth, cracked the top five at halfway and eventually grabbed second from Mitchell after one of several restarts in the second half of the race. Millwood was in control in the final laps, but just as Dennis Franklin slowed with a flat tire on the backstretch, Millwood’s right-rear tire, too, gave way and Bare moved to the point for the final restart.

Bare’s right-rear tire held up — “It’s a good one,” he said — as he kept Overton and McDowell in check to the finish.

“We talked about it there before the race started,” Bare said. “They said to go hard a little bit and then back off and kind of ride. I kind of went hard the whole time there until the end. I saw (Millwood), he looked like he was slowing down. I got going there pretty good and then he had the flat.”

Overton, who piloted a car owned by fellow Georgian and racing buddy Brian Ligon after his split earlier in the week with Tennessee-based Dream Racing, was impressed by Bare’s performance.

“I won my first twenty-grand here, so, if anybody could win it, I’d like to have seen him win it,” Overton said. “He’s a heckuva little wheelman and he done a helluva job out there. I know it’s really special, so I hope he enjoys it.”

Overton, along with his brother Cody and other crew help, thrashed on Ligon’s car to get it rolling by feature time. He started 12th and was up to sixth after just six laps and ran in the top five most of the way.

“We’ve been working on it all day. We had a bunch of problems. Hot-lapping wasn’t good, we qualified terrible,” Overton said. “We kind of got turned around. I found my problem after the heat and worked on it a little bit. If we (have) another race I think I could get ‘er done in this thing.”

Overton was glad to have a solid run after struggling most of the season for the No. 116 he fielded for Chip Stone and Randy Weaver. The Ligon ride was temporary — the car is for sale — but Overton is working on plans for the rest of the season.

“I’ll announce it here later, but I’ve got a good idea of where I’m going to go and what I’m going to do,” he said. “Like this weekend, I wanted just to come out here, not to prove a point or anything, but just to get a little confidence back in myself that I know I can do it. Things didn’t work out with me and Weaver, but no hard feelings there. I’m looking forward to the future and we’ll see what we’ve got.”

McDowell started fifth but never got close enough to the lead to make a serious challenge.

“In lapped traffic there early the car was good, and once the racetrack kinda got single-file there and one-laned, I chose the bottom on a restart, so that was my bad,” the third-place finisher said. “This is a new car. We had it at Eldora (Speedway in Rossburg, Ohio) last week and we did some stuff that we did there and just didn’t work here. So we’ll work through it. I felt like we can make adjustments and get a little better, and that’s what it’s all about.”

Eight cautions slowed the event, the most serious in the second half of the race when Justin Williams, amid close-quarters racing, spun in turn three and collected Johnny Pursley.

Arthur also drew the next caution for a backstretch spin and other yellows flew for flat tires, including for Dale Hollidge and Jason Covert.

Notes: While Tyler Bare won his first Super Late Model event, he’s had extensive Crate Late Model success, including nine victories last season with Fastrak victories in the East Coast Rumble and Triple Crown events. … The event was presented by WhosYourDriver.org. … Runner-up Brandon Overton was glad to get the chance to compete. “I can’t thank Brian Ligon enough for loaning me his car,” he said. “I called him up and we put this thing together in three days. I said, ‘Hey, can I borrow your car,’ and he said no problem. So I come to Virginia to run for $20,000 and he told me to take off with it.” … Virginia Motor Speedway’s next big event is Sept. 14-15 for the Fastrak World Championship, which includes a $20,000-to-win event for Crate Late Models.