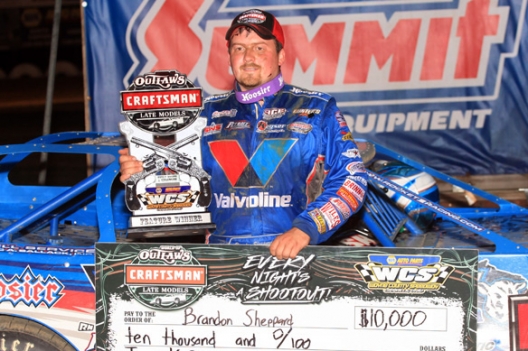 The New Berlin, Ill., driver of the Rocket Chassis house car overtook home-track driver Doug Drown of Wooster, Ohio, at the halfway point and raced to a victory that helped his team turn things around after a month of struggles.

Sheppard completed a three-race weekend that included a victory at Stateline Speedway in Busti, N.Y., and runner-up finish at Ransomville.

“We are happy to be back on track,” Sheppard said. “We’ve been messing around with the car a little bit. We had that motor break on us and had some back luck there at Cherokee (Speedway in early May).

“We just kind of got our heads down a little bit. We all had a little talk this week and we got our confidence back and got everyone’s heads on where they need to be. Everything is clicking now and hopefully we can continue this consistency throughout the year.”

Marlar, who took second from Frank on lap-32 restart, drew within two points of Madden in the series title chase.

“We’re having a good time and we had a lot of fun racing tonight,” Marlar said “That track got really racy during that feature, like seriously racy. It was fun. We had a good weekend and we’re all locked up in that points thing.

“We try to have consistently good finishes and then race for wins every night. I have found myself backing off in bad situations just because we’re points racing. It’s not consuming us but we’re conscious of it.”

Frank, who earlier this season ended a full-time run on the series that began in 2004, posted his second top-five finish of the season in the 50-lapper.

“We weren’t very good back at home at Stateline Speedway so we just came up with something I wanted to try different,” Frank said. “Last night (at Ransomville) it was pretty good and we stuck with it tonight. It needs a little tweaking and we were a little soft on tires compared to Brandon . I didn’t know what lap we were on so I probably saved my tires a little too much. I know we couldn’t do anything with Brandon, but maybe Mike and I could of have a little better of a race.”

Dave Hess Jr. of Waterford, Pa., started outside the front row and squeezed between polesitter David Breazeale and the guardrail in turn two to grab the lead at the outset, staying in control the first 20 laps.

The eighth-starting Drown, the reigning track champion, worked his way past Sheppard and into the second spot before grabbing the lead with an outside move exiting turn four on the 20th lap. Hess slid up the banking and into the turn-four guardrail on the next lap, drawing a caution.

After enough caution for Ryan Fenish, Sheppard and Frank restarted side-by-side behind Drown and Frank briefly pulled alongside Drown before Sheppard dropped him to second.

Sheppard then went to work on Drown, making the winning pass on lap 25 for a lead and quickly built up a comfortable lead. Drown held onto the second spot for seven laps, but he slid into the outside guardrail between turns one and two to draw a yellow flag and fall from contention.

While Sheppard wasn’t challenged the rest of the way, Marlar went to work on Frank, taking the second spot before the final yellow flew for Rick Eckert on lap 43.

Notes: WoO competitors return to action June 21023 for the 12th annual Firecracker 100 weekend at Lernerville Speedway in Sarver, Pa., that culminates with a $30,000-to-win main event. … Polesitter David Breazeale of Four Corners, Miss., slipped back to a ninth-place finish. … The track lights briefly went dark during the lap-32 caution period.