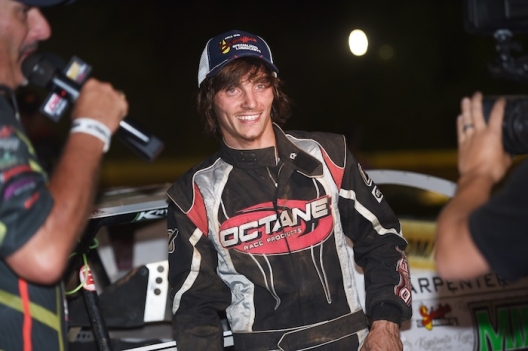 RICHMOND, Ky. (June 16) — It didn’t matter which groove Tyler Carpenter chose in Saturday’s 50-lap Mike Roland Memorial at Richmond Raceway. High, middle or low, the Parkersburg, W.Va., driver was able to run every lane, straight to a $10,031 victory in the event co-sanctioned by the Schaeffer’s Southern Nationals Bonus Series and Schaeffer’s Iron-Man Series.

Winning his heat race to start on the outside pole, Carpenter shot to the front of the field at the drop of the green flag, fighting back an early run by fellow front-row starter Todd Coffman of Junction City, Ky. As the race reached the halfway mark, Carpenter cruised over the field, holding more than a half a straightaway advantage over second-running Derek Fisher of Olympia, Ky. Successfully navigating late-race lapped traffic, the West Virginia standout went on to score his second consecutive victory in the event honoring the late track official.

“I just race to have a good time,” Carpenter said in victory lane. “Ain’t no country boy like me going to make a living out of this. It’s been turning out pretty good. The more I’m doing this, the more I’ll be able to venture out some and actually see how good I actually am. These guys ain’t no slouches. But these kinds of tracks kind of suit me.

Advancing from the fifth starting spot, Fisher, a winner at Richmond already this season, held off challenges from Jared Hawkins of Fairmont, W.Va., to finish runner-up at the checkered flag. Hawkins ran third, with John Ownbey of Cleveland, Tenn., running fourth. Jason Jameson of Lawrenceburg, Ind., rounded out the top five.

“The car was awesome,” Fisher said. “The crew did a great job. I would have liked to have won another one. But we came up one short. That’s alright. I had fun racing with Jared (Hawkins) there the last few laps.

“The track was really good. We could put it anywhere and it would stick. It looked like Tyler (Carpenter) could too and I’m sure Jared (Hawkins) behind us was doing the same thing. The car was just awesome. I couldn’t ask for anything else. We just had a good time tonight.”

After suffering engine problems in Friday’s co-sanctioned event at Lake Cumberland Speedway in Burnside, Ky., Hawkins and team rebounded at Richmond, with the West Virginia driver improving from the eighth starting spot to finish third. With the pair racing side-by-side, Hawkins attempted to slide ahead of Fisher to take second late-race but his challenge came up short.

“Everybody worked real hard last night,” Hawkins said. “We stayed out until about 5:30 getting everything flushed and got the motor back in this morning. The race was good. Running with Derek (Fisher) was fun. I really thought we had a shot there for a minute when we got into traffic and then looked up and Tyler (Carpenter) was kind of right there … hats off to Tyler. He’s on it right now.”

Notes: Carpenter’s Richmond victory marked his second of the weekend. He was the winner of Friday’s Johnny Wheeler Memorial at Lake Cumberland Speedway in Burnside, Ky. … All three of Carpenter’s Southern Nationals Bonus Series and Iron-Man Series victories have been at Richmond. Along with his back-to-back Mike Roland Memorial victories, he was the winner of the 2016 Paul “Butterball” Wooldridge Memorial. … The race was slowed by a single caution on lap five when fourth-running Zack Dohm slowed in turn two. ... Runner-up finisher Derek Fisher clocked the overall quick time during qualifying but his time was disallowed after he was found to be in violation of the tour’s droop rule. Fisher has posted four weekly victories at Richmond so far this season. … Richmond hosted its richest event under new owners Bill and Stacy Lupinos. … The $31 added to the winner's purse honored Johnny Wheeler, a veteran Richmond driver who died earlier this spring.