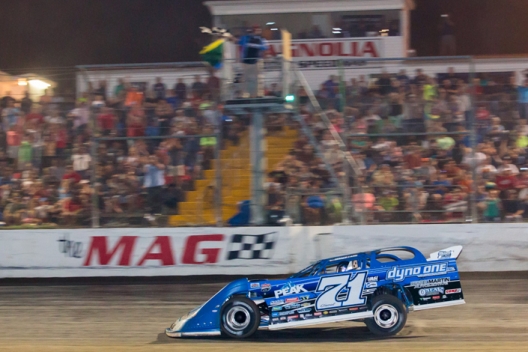 COLUMBUS, Miss. (June 16) — Throwing his hat in the ring as a late contender at Magnolia Motor Speedway on Saturday, Hudson O’Neal of Martinsville, Ind., emerged victorious in the Lucas Oil Dirt Late Model Series Clash at the Mag. O’Neal took the lead on lap 93 from Josh Richards of Shinnston, W.Va., and led the final eight laps. He held off a fast-closing Bobby Pierce of Oakwood, Ill., to claim his first-ever Lucas Oil Series win and a $20,000 payday, the richest of his young career.

Richards settled for third after holding the lead for all but one circuit from laps 27 through 93. Scott Bloomquist of Mooresburg, Tenn., who spun on lap 37 while battling in the top five, rallied from the tail of the field to finish fourth, while Tim McCreadie of Watertown, N.Y., slipped to fifth after briefly taking the lead from Richards on lap 87.

The 17-year-old O’Neal waited with the patience of a veteran while early leaders Earl Pearson Jr., and Jimmy Owens — and eventually Richards — set the pace.

“I knew there in the beginning them guys were running really hard,” said O’Neal. “I was running third, fourth or fifth there the majority of the race and I was like just keep the tires under you, keep it straight. That was the main thing I tried to do the whole race. Then there with about 60 (laps) to go I didn’t think I really had anything for them, and then I found a little something (traction) around that bottom.”

O’Neal’s low-side grove proved to get the best of Pierce’s high-side charge at the finish, but not before they both managed to slip by Richards, who was dominant in his Best Performance Motorsports No. 1 until a scrape with McCreadie in the waning laps punctured a rear tire.

After starting second and getting the jump on Pearson of Jacksonville, Fla., Owens, of Newport, Tenn., led 25 of the first 26 laps. Pearson, the polesitter, managed to sneak ahead on lap 12, but Owens quickly retook the top spot a lap later. The third-starting Richards was never far behind, however. And thanks to a handful of early cautions — three in the first 21 laps — Owens was never able to drive away.

After forging ahead on lap 27, Richards pulled out to a 1.664-second advantage by lap 30. But cautions continued to plague the race as five more yellows slowed the action over a 30-lap stretch in the middle of the 100-lap affair. That helped O’Neal stay close, despite being in conservation mode. After falling back to sixth midway through the race, he moved back into contention with 20 laps remaining.

As the laps wound down, he found himself in a four-car battle for the lead to Richards, McCreadie and Pierce. McCreadie challenged Richards and even nosed ahead on lap 87, but he began to fade following incidental contact with the leader. That left O’Neal, who swept by to take the lead with just a few laps remaining.

“That was the biggest thing early, just be straight and not get the tires hot. I think I did a decent job of that. It’s a big learning curve and I think I learned a lot this race. It’s cool to see that I was able to run up front there and it’s cool to see how you can save so much and be so good at the end, so definitely I learned something tonight.”

Glued to the bottom, O’Neal had to hold off Pierce, who was on a mission after pitting to check his oil cooler cover on lap 21. Pierce was all the way back to sixth by lap 38. By lap 67 he was pressuring Richards for the lead, but as the two raced door-to-door down the backstretch, the race was slowed for the final time when Neil Baggett brought out a caution.

Once he cleared Richards for good, he threw all he could at O’Neal, but simply couldn’t muster enough momentum to make a pass.

“(The last lap) kinda reminded me a lot of Deer Creek coming to the checkered with (Jonathan Davenport), but it just wasn’t a slider,” said Pierce. “Man that was a heck of race. Congrats to Huddy. It’s his biggest win and he deserves it because he’s been getting pretty close. All of my guys I just have to give a huge thanks to ‘em. They bust their butts for sure all weekend and to deliver a second-place finish with having to go to the tail on like lap 20, you know I can’t really ask for more. I would’ve liked to have got Huddy there at the end. Those last 10 laps I was giving it everything I had.”

Richards, whose last Lucas Oil Series victory came on opening weekend at Golden Isle Speedway in Brunswick, Ga., back in early February, fell just short of picking up series win No. 3 on the year. Clearly the dominant car during the race’s middle stages, Richards found himself in the clutches of a host of challengers late.

“It was tough. The track had changed so much from the beginning,” said Richards. “I knew we had a really good car. I was just trying to find a comfortable spot. I looked up and (crew chief) Randall (Edwards) was pointing to the top, pointing to the bottom and I was just trying to move around. And then in the meantime there, I think it was probably with 10 (laps) to go, McCreadie got into our left rear and it actually put a hole in our tire.

“When I came across the checkered, the tire was all the way on the ground. At first I was like, man we faded so much, but had that not have happened, I don’t know if I could have held them off or not. But we sure would have tried. Hudson did a phenomenal job. I’m a huge fan and it’s cool to see him get his first win. If we couldn’t do it, I’m glad he could.”

A late-afternoon rain shower passed through area, dousing the facility and temporarily offering a bit of relief from the stifling humidity and Saturday’s temperatures that reached the mid-90s. Even with the help from Mother Nature, however, speedway promoter Johnny Stokes opted to added another load or two of water to the 3/8-mile oval, which produced excellent side-by-side racing on Friday night. … Cars were called to help roll in the track at 6:50 p.m. and the first hot lap session, Crate Late Models, took the green flag at 7:17 p.m. … With all of the Lucas Oil Late Model Dirt Series regulars in attendance already locked into the main event, the night’s two provisionals will go to the two fastest qualifiers not in the show. Chad Thrash of Meridian, Miss., and Brian Rickman of Columbus are the first two in line to receive those starting spots. … There is a lone new entry for Saturday’s program. Clay Fisher of Dewitt, Ark., was a late arrival an will tag the rear of the 10-car consolation race, needing to finish fourth or better to make the 100-lap main event. … Polesitter Earl Pearson Jr., of Jacksonville, Fla., was cautiously optimistic following Friday’s heat victory. “I’ve got a 100 laps to mess something up now. Anyway the only thing we can do is go backwards,” said EPJ. “We came here (Thursday) night and we tested and that was our goal, just to learn something. And we did. It definitely helped us.” … Following his win in the second heat, Jimmy Owens of Newport, Tenn., felt he needed to give his Ramirez Motorsports No. 20 a closer look. “We just had a few drivetrain issues we was just double-checking to make sure everything is OK,” Owens told DirtonDirt.com pit reporter Ben Shelton. “You know how it is. You’re starting on the front row of a big race, you get a little nervous. … Shinnston, W.Va.’s Josh Richards, who won the third heat, said he felt good about his team’s Rocket XR1 chassis. “We’re pretty good, so I don’t think we’ll make a whole lot of changes, just try to go out and race,” said Richards. “But we’re gonna tweak a little bit.” … Evan Ellis outran Chad Thrash and Monte Skinner to win Friday’s 20-lap Durrence Layne Crate Late Model feature. … Nick Thrash won Friday’s feature for 602 Crate Late Models.

Going out 13th among 27 entrants, Earl Pearson Jr. of Jacksonville, Fla., toured Magnolia’s 3/8-mile oval in 14.664 seconds to set the quick time for the weekend. Pearson, who won the 2010 Clash at the Mag, will roll off from the pole of the first of three scheduled heats. Jimmy Owens of Newport, Tenn., who stopped the clock at 14.759 seconds, earned the pole for the second heat, while local standout Neil Baggett — the Shannon, Miss., native now calls Columbus home — earned the pole for the third heat with a lap of 14.828 seconds. Six cars from each heat advance to Saturday’s 100-lapper.

After a two-week hiatus the Lucas Oil Series is back in action with its only trip to Mississippi this season. … Driver and fans were greeted by a scorching 98-degree day with typical southern humidity to boot. As the Durrence Lane Crate Late Models take the track to hot lap, there are a few rogue clouds in the area and noticeable lightning strikes in the distance to the East. … It’s the tour’s 10th visit to Magnolia Motor Speedway. … The race is presented by Cooper’s Country Meat Packers. … The two-day show is one of only two Lucas Oil Series races in June following the cancellation of La Salle (Ill.) Speedway's June 1-2 action. … Friday’s action includes time trials and heats for Lucas Oil Late Models and street stock heats along with a complete program for Crate Late Models, sportsman and factory stocks. … Saturday’s action includes consolations and a 100-lap feature for Lucas Oil Late Models and a $2,000-to-win street stock feature, along with complete programs for Crate Late Models, sportsman and factory stocks. … Mike Marlar of Winfield, Tenn., is a two-time Clash at the Mag winner (’17, ’13). … Other series winners at Magnolia include Darrell Lanigan (’16), Jonathan Davenport (’15), Don O’Neal (’14, ’12), Scott Bloomquist (’11), Earl Pearson Jr. (’10) and Billy Moyer (’09). … Notable drivers who entered last year’s Clash at the Mag who are not present this weekend: Marlar; David Breazeale of Four Corners, Miss.; Timothy Culp of Prattsville, Ark.; Boom Briggs of Bear Lake, Pa.; Brandon Overton of Evans, Ga.; Garrett Alberson of Las Cruces, N.M. and B.J. Robinson of Bossier City, La. Marlar, Breazeale and Culp are now chasing the World of Outlaws Craftsman Late Model Series as was Overton, who announced his split from Dream Racing earlier this week. ... Jamie Tollison of Kosciusko, Miss., was a late entry, bringing the car count to 27.