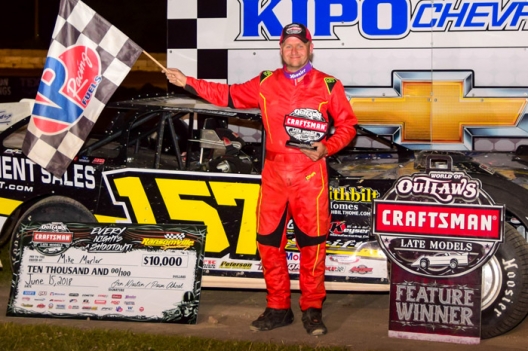 But Marlar figured things out by mid-race and headed for the front, using a high-side charge to overtake reigning series champion Brandon Sheppard with 11 laps remaining. Marlar cruised the rest of the way for a $10,000 victory, his second on the series in 2018.

Chub Frank of Bear Lake, Pa., crossed the finish line fourth, but he was dropped to sixth in the running order after officials ruled he jumped a restart with 10 laps remaining; he was docked two positions.

Tyler Erb of New Waverly, Texas, led the first 11 laps and ran third until lap 23 when he appeared to have a problem that sent him into the turn-one concrete, drawing the first of two cautions.

Marlar was running fifth at mid-race when he started heading for the front. He took second from Madden on lap 34, then swept around Sheppard on lap 40 to take command.

“Honestly, it took me a little while to figure out the racetrack,” said the 40-year-old Winfield, Tenn.,d driver. “It kind of had some dirty spots and it took me 15 or 20 laps to figure out what I was doing wrong. Once I got that cleared up — I didn’t think I had a good car for a while — then this thing came to life. Just a fun race …. I’m glad I got by those guys.”

Marlar thanked his crew, sponsors and supporters for helping his Delk Motorsports entry to victory lane and right in the thick of the series title chase.

“We had an up and down night,” Marlar added. “We had the radiator knocked out there after the heat and this and that, so I’d like to thank (crew members Josh David and Jerry Spruce). I get to stand here and be a hero, but them boys are always pulling it off.”

Sheppard, the previous night’s winner at Busti’s Stateline Speedway, was in solid control after taking the lead from Erb on the 12th lap, but Marlar forced him to settle for a runner-up finish.

“It was a pretty crazy race out there,” Sheppard said. “It got really dusty, and if I got off the bottom, I couldn’t see where I was going. …

"I had a really good car, I just started shoving there. The longer run we went, the worse I was steering in (to the corner). I couldn’t steer across that center (of the corner) either. I think Mikey had a little bit better tires on than I did. … Good job to him for sure. He caught me sleeping (in turns one and two) on the top.”

Besides the caution for Erb, the only other yellow appeared with 10 laps remaining when tour rookie Brent Larson of Lake Elmo, Minn., got into the frontstretch wall. Sixteen of the 19 starters were running at the finish with 14 on the lead lap.

Notes: Along with thanking his crew and sponsors in victory lane, winner Mike Marlar passed along his winner’s check to series announcer Rick Eshelman in tribute to the recent passing of Eshelman’s long-time girlfriend, Sandy Holt, who spent several years scoring for the WoO tour. … Devin Moran of Dresden, Ohio, ran as high as fourth early in the race before settling for eighth. … David Breazeale of Four Corners, Miss., started third and held that spot early before fading to 10th. … WoO drivers wrap up three straight nights of action on Saturday with a trip to NAPA Wayne County Speedway in Orrville, Ohio.